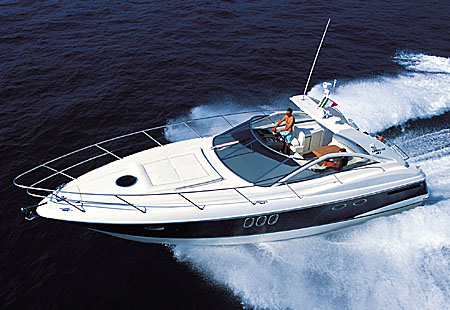 Absolute is a curious name for an Italian boat, though it certainly beats some of the more unusual names from the USA. But you can see the picture the builders are trying to draw – the last word, as good as it gets et cetera.
And the two Absolutes I looked at are further along that road that most boats. These boats hail from Piacenza and have all the style a name like that conjures up.

Absolutes range in size from just under 12m to more than 21m, but their measurements are expressed in feet even by the French who invented the metric system. The design, and certainly the house style, are remarkably consistent through the range. The smaller to mid-range boats vary in not a lot more than scale: layouts are close to identical.
LAYOUT

These two Absolutes the 45 and 41 were similar in terms of having a garage aft for the tender, underwater lights, timber decking and a deck layout designed for gracious living featuring sun bathing and barbecuing on the big unit.
What was obvious in the pens was the reassuringly substantial berthing hardware. The cleats were the right size and positioned in the right places. The cleats of almost half the boats in this size range that I have reviewed have been too small to take the size of ropes the boats need. It’s good that practicalities get the same attention as the luxuries.
The layout is sports cruiser, which is almost inevitable in a boat with Mediterranean ancestry. An Absolute buyer will not be someone who almost bought a flybridge sports fisher instead. These boats are for hardcore marine pleasure seekers. Or softcore.

I could happily make friends with someone who owned a boat with this much luxury on tap.

The concession to Australian reality is the fabric canopy that shades most of the cockpit. For visiting European sun worshippers there is a foredeck sun bed and another on the garage roof. If you need more, the canopy furls.
The cockpit space is well laid out for its daytime role. Rather than the array of form-fitting upholstery pointing in various directions that so many of the alternatives go for, the Absolutes simply have a U-shaped lounge to port. It’s capable of seating seven or eight (a couple less on the 41), and has a removable table in its midst. Even with the table in place there’s plenty of room to travel from cabin door to boarding platform, or tend the barbecue. Remove the table and there’s dancing room.

The barbecue, normally concealed below a gas-strutted lid, has the ancillaries of lockers, worktop and a large sink. Inevitably, it will get used for most of the cooking, which is almost a pity as the downstairs galley is as good as you will meet.

Both the 41 and the 45 have fore and aft sleeping cabins with en-suites. The 41’s aft cabin is a twin and the 45’s, a double, and that’s the sum of the below deck differences. Both of the 45’s cabins are large, with the forward one having more consistent headroom. Which one would be considered the master suite would depend on whether the boat was making a night passage ? at any sort of speed the owner would pick the aft cabin for its lower motion.

Both have bathrooms that take onboard classiness to new heights. How about a glass wash basin and curved, sliding-glass walls for the shower stalls?

The day space between the cabins is special indeed, not to say vast, and all the Italian design flair comes out to play. It is fitted with immaculate joinery in pale timber, plus discreet areas of synthetics. The galley is to port but was not immediately identifiable because, when out of use, it gets covered and screened by lids and doors. Open them, and a full-scale cooking centre is revealed, with a vast volume of refrigeration and storage on the same scale. The deck is sheathed in timber as standard. Carpet is an option but who would take it?

Opposite the galley is a lounge area upholstered in leather, with cushions and squabs velcroed in for easy removal. Sitting here the large portholes (equipped with blinds of course) are low enough actually to see through, something rare. By night, the table can drop to assist conversion of the area to another bedroom. This lifts the total overnight population to eight, the upper deck lounge also being convertible.

Bathrooms, cabins and saloon all are cooled by climate-controlled air-conditioning, unless you prefer to open the ports and hatches all of them defended by flywire.

PERFORMANCE & HANDLING
Part of the trick to having so much underdeck space is the use of sterndrives instead of shafts. There would be few 45 footers with legs, but the extra room resulting from pushing the motors back under the garage makes an irresistible argument for fitting them.

Our 45 substituted 350hp twin Volvo diesels for the 310s, which are standard on both the 41 and 45. Even 350s are not huge power for a boat of this size, but they allowed us to reach 38 knots at 3400rpm, at which point the governor cuts in until the engine hours reach 20. Once bedded in, top speed is likely to be about 40 knots, a result suggesting a slippery hull.

A lively cruising speed of 23 knots came up at only 2300, with a combined fuel consumption a little over three litres per nautical mile. The frugal thirst is just as well since the 940lt fuel capacity is definitely on the small side and the cruising range of 300-plus nautical miles might deter a few buyers.

The 45 proved to be an undemanding boat to drive. Electronic engine controls and power steering are just the start, with a bow thruster gilding the lily. Where a lot of thrusters are barely more than decorative in a decent cross wind, this one kicks butt. Combining differential power on the main engines with bursts of thruster pushed us sideways very convincingly.

You can also manoeuvre using the legs small boat style: forget about having twins and use the throttles/gears as one, turning the wheel to tell the stern where to go. The combination of grunt from the engines and grip from the propellers allowed satisfyingly precise movements.

Actually driving is the pleasure you might suspect. The seat is superb, with exactly the right resilience, and of course has a lifting bolster for a raised driving position. It faces a dash to shame a Ferrari, and is well located relative to wheel and throttle. Wheel twirling gave sports boat-type response, but the extra tonnes of weight provided a comfortable presence.

AT ANCHOR
For occasions at anchor, or on a mooring, the boarding platform is big and would make a spot for the deck chair of any passenger eccentric enough to want to dangle a line at anchor.

It’s also the launching pad for the tender; the garage is deep enough to house a 2.6m inflatable. Or a bigger one if you carried it deflated.

The price for the 41 is $795,000, and for the 45, $980,000, which is not expensive in this class. And although the name might be new to Australia, the newness should not affect resale values. All Absolutes are moulded to Lloyds’ standards, and the builders retain core samples. This means that in addition to the boats being reassuringly strong, they can be brought into survey relatively cheaply. A boat that can be sold-on to charter work holds its value.

I mentally sum up my reviews of boats not by how much I would like to own one, but how glad I would be to have a friend who owned one (it removes the boring provisos of whether or not I could afford to fuel, pen and maintain it).

Any Absolute buyers who want assistance in having a damn good time can feel free to give me a ring.