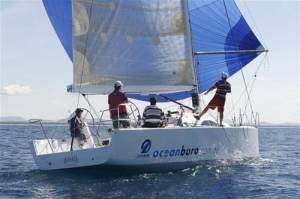 Great designers and arty types of all varieties are said to hate compromise. It’s hard to know why, because the act of compromise is the way of all life. We rarely get the choice of whether or not we should compromise; if we are lucky, we may get to choose how big a compromise we make.

This little lecture brings me to the Archambault 40. The cruiser/racer-style is the staple of the modern production yacht business. Most are superb boats, but on a compromise scale of one -ten they probably score six.

And then along comes a boat like the Archambault 40, which on the compromise scale comes in at only three or four.

Archambault is a French company, which specialises in fast day-sailers, racer/cruisers and does a line of modern bilge-keelers, a style even the Brits gave up on long ago.

The Archambault 40 is meant for racing, at a reasonable price. The hull lay-up is not particularly high-tech, though the deck is injection-moulded (where the resin is injected between two moulds). The interior is simple but comfortable. The boat is straightforward on deck, too. The mast is not particularly tall (because it is almost masthead-rigged) and it has a deep chord (the section depth). The mast is held in place by two spreaders with discontinuous diagonals, and single lowers.

The hull is classic modern; straight stem and stern, plenty of beam aft and a parallel-sided keel, slightly raked. The auxiliary is a 29hp Volvo Penta Sail-drive mounted just aft of the keel.

The boat we sailed was fresh from a second place in the IRC Cruising class at the Hahn Premium Hamilton Island Race Week ? ‘Hammo’ to the initiated. Owner Stephen Mackay bought the boat because he has a young family and did not want a full-on race boat, but he does not intend to live aboard or cruise. “I did not want the plush fit-out of the full ruiser/racer,” he says. He will campaign in local Newcastle events, some Sydney regattas and Geelong Race Week.

ACCOMMODATION
There are three double cabins and two settees so you can sleep eight. In the cabins, storage is in fabric pockets on the hull sides instead of the timber structures used on cruiser/racers, and the storage cupboards are open-fronted. For my money this simple fit-out is a good thing; all the usual creature comforts are there, but in an accessible and lightweight form. I like open-fronted lockers; I can never find anything on a boat anyway. The bathroom has a shower, the galley (forward) has a two-burner stove, there’s a door on the owner’s cabin forward, but not on the rear cabins. There is a nav station, but the navigator sits on the front of one of the rear berths.

All the usual necessities are here, but the interior is cheerful rather than ornate. I like the blue and white striped upholstery; the fabric reminds me of the smock worn by the French matelot from several decades ago. He would also wear a beret and a Gauloise would be hanging from his lower lip.

A lot of the interior is moulded; this boat will be easy to keep clean. It will also be comfortable in its uncluttered way.

ON DECK
The cockpit is the heart of a race boat. It’s the heart of any boat, really, because if it doesn’t work ergonomically it can drive you nuts and risk your life. And you can lose a race.

The Archambault 40’s layout works fine. The mainsheet traveller is right aft, behind the skipper. The sheet winches are amidships, on mouldings, which project from the sides so the crew can get weight in the perfect position to wind. Secondary winches are on the coach-roof. The mainsheet is split and controlled by winches on each coaming behind the helmsman’s position.

The steering wheel is big, mounted on a moulded pedestal, which also provides the skipper’s foot support when he is seated. When standing his feet are held firm by terrific non-skid.

There are moulded foot supports on the centreline at the forward end of the cockpit, and down aft they out towards the sides so, when going upwind, a crewman positioned behind the helmsman is well supported while working the backstay.

The fact that our crew, a number of whom had never been on the boat before, successfully tacked and gybed the boat in a good breeze without once getting into a muddle proves that the cockpit works.
“Some of them are dinghy sailors”, said Pacific Yachting’s Glenn Coulton, “who have never handled a spinnaker pole before”. A sign of the times; this is the era of the bowsprit and the asymmetric spinnaker. The Archambault 40 is fitted with a bowsprit/prodder, but Steve chose not to nominate it when the boat was measured for its IRC rating of 1.118.

SAILING
Newcastle’s Cruising Yacht Club is in the suburb of Wickham, which used to be at the daggy end of town, but nowhere in Newcastle is daggy any more. The marina is still growing and the clubhouse has yet to be built, but sailing from here is a joy. From the marina you sweep down a foreshore, which is urban beautiful on one side, neat industrial on the other. In a matter of minutes you are past Nobbys Head and in Stockton Bight. Modern Newcastle is a beautiful city, given new life by two disasters ? the earthquake of ’88 and the closure of BHP and the subsequent reinvention of the city and rebirth of the harbour and foreshore.

The nor-wester wins the battle with the sea breeze and Cabernet Sauvignon leaves harbour under spinnaker. Out at sea, up goes the No.1 headsail. Sailing this boat is really easy; in a breeze of 15-18 knots, she is a bit overpowered in the gusts when going upwind, but the light steering keeps her well under control. We get 7.2 knots of boat speed at around 28 degrees to the wind, but the breeze is twitchy and the angle is hard to measure.

We bear away, up goes the kite and speed jumps instantly to 10 knots on a deep reach. Up a few degrees to a beam reach and we get 10.7 knots of boat speed in 12 knots Apparent of wind. A bit of a ripple comes off the shore and Cabernet scoots up to 12 knots. Easy. Steve reports that at Hammo they saw 17 knots running in 25 knots of breeze.

The boat is astonishingly easy to control. The steering does not load up at any time; to a degree, steering is an intellectual exercise, not a tactile one. By that I mean that when Glenn calls “pressure coming” and I wait for the helm to tell me that the boat feels the extra breeze, nothing happens. She simply accelerates in a straight line, with no need to wind off helm. It may be a different story in a sea and with tougher gusts; we had smooth seas, but there is never an acute angle of heel, or sudden lurch that upsets the crew. It’s a terrible cliche, but this hull really, really is like a big dinghy.

Upwind back to harbour, with the No.3 headsail instead of the No.1, we see 7.3 knots at around 26 degrees.

Steve, Glenn and their crew can vouch for the fun. The crew brought most of the new sails to Hammo on the plane. “We had a day to put them up and make sure they were triangular,” says Steve.

Next day, the first race at Hammo was Cabernet’s first race ever. She finished 25th; despondent, Stephen hired a diver to have a look underwater.

The diver found nothing, but Glenn still reckons they had picked up a line from a fish trap. Next day they were third, then followed a second, third again, and they wrapped up the week with two wins, to place second overall. “We came home with a wet sail”, says Steve.

The only problem with the boat so far is that the anchor hatch leaked when running at 17 knots in the short Whitsunday seas.

Cabernet’s owner is very happy with his boat. The trouble is, with a great debut regatta like this, when emotions ran from despair to euphoria, what does a new boat do for an encore?