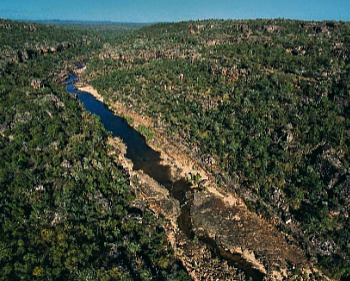 When I flew into Davidson’s Arnhem Land safari camp, I really didn’t know what to expect. I knew there would be billabongs with spectacular birdlife, but was absolutely gob-smacked at the 50,000-year-old Aboriginal rock art gallery and fantastic barramundi fishing — not to mention, buffalo hunting legend, Max Davidson’s, riveting tales about giant Top End ‘salties’.

There’s excitement in the group as the old hunting jeep lurches along the rocky tracks of Mount Borradaile.

Red-haired Lee Davidson is our driver, and is treating us to a rare aboriginal cave painting, in a rocky outcrop on the Cooper Creek flood plain.

We are soon gazing at a Tassie tiger, so perfectly depicted it must have been done from a live thylacine. The painting, 1000s of years old, is surrounded by others — of rock wallabies, dugongs and water buffalo.

I flew by light aircraft from Jabiru, over the south alligator river and Magela flood plain, where we saw herds of brumbies and great salties.

Mount Borradaile and Davidson’s Safari Camp are nestled in the heart of our largest Aboriginal reserve — Arnhem Land. Max and Philippa Davidson were granted a lease in 1986 on 700sq km of pristine wilderness from the traditional owners, the Ulba Bunidj tribe, establishing award-winning Davidson’s Arnhemland Safaris.

On my first day, I met Dallas, a keen fisherman from colorado. He had just returned from barramundi fishing on the billabong with his son. “See that,” he said, pointing to his shirt, “That’s crocodile mud. This shirt isn’t getting washed. I’m taking it back home to show my fishing mates!”

His enthusiasm was contagious, and I asked to go fishing with him the next morning. We caught lots of 2kg barramundi and a few tarpon — on almost any lure we lobbed at them, keeping only about three for camp lunch and letting the rest go. Leeroy, our fishing guide, cooked them on an open fire by the billabong.

With a dash of limejuice, barramundi never tasted better. The fishing record at camp stands at a 13kg fish, or 110 fish caught in a one afternoon, by three fishermen. Davidson’s only keep what they need for the next meal.

In the afternoon we went rock pool swimming in the upper cooper creek, where I couldn’t help thinking about the 4m crocodile we had seen on the billabong, but Lee assured us this place was quite safe at this time of year.

Yellow lambs-tail wattle flowers collected in artistic whirls on top also. A 2m sand goanna checked us out, on the bank.

During the wet season, Mount Brockman grevilleas trail yellow flowers over the sandstone and red-collared lorrikeets feed on their nectar. Leichhardt’s grasshopper, which are orange/cobalt blue in colour, can be spotted. Found only on the pityrodia shrubs that grow in Arnhem Land, Keep River and Kakadu, CSIRO researcher Lyn Lowe has studied them around Davidson’s.

My visit was in the early dry season, called ‘Wurrgeng’ by the Aboriginies, which extends from June to August. The nights are cool and days pleasant, at this time, but if you don’t mind the rain and humidity, try the wet season called ‘Gudjewg’. It extends from December to March, and is a good time since the land is green with waterfalls in full flow.

There are both freshwater and saltwater crocs on the Cooper Creek billabong, which make for good viewing on the dawn and sunset billabong tours. One crocodile still had blood dribbling down its lower jaw, indicating it had probably just eaten a barramundi or magpie goose.

Mount Borradaile is renowned as one of the richest Aboriginal cultural sites in Australia, a gallery of hundreds of rock art paintings recording 50,000 years of Aboriginal life. There are many natural caves and labyrinths, creating an archaeological museum.

Aboriginal sleeping platforms are covered with paper bark matresses and bowl-shaped depressions in the rock, where seeds were ground into flour. Aboriginal skulls and bones can be seen on burial platforms.

The cave paintings show contact with the outside world — Macassan trading vessels, steamships, rifles and white people with hats, pipes, and hands in their pockets.

There’s an amphitheatre named ‘Major Art’ covered in hundreds of hand stencils and x-ray style paintings. In many places the artwork is so fresh, it looks like it was painted yesterday, but it is at least 100 years old. The density and delicacy of the art is beyond belief. There are rifles, pistols, ships and hands, some outlined in reckitts Blue, which was a shirt whitening product used by missionaries.

In a geographic sense, ‘Major Art’ is a stone platform, which has been scoured out by the sea, creating honeycombed passages. Carnivorous ghost bats called ‘malambipi’ live in these hidden corridors, where Max pointed out axe heads, clay pipes, a tin flute and a Dutch bottle which probably came from Macassan traders.

Davidson’s Safari Camp is made of a dozen tents encircling a large roofed platform which houses the kitchen, dining room and library.

The insect proof tents are comfortable, with decent mattresses, room fans, and light — until the generator goes out at 10.30pm. There is hot and cold running water, hot showers and delicious meals such as barramundi and rack of lamb. Three course al-la-carte meals are served in the evenings.

To reach Davidson’s, you can take a 20-minute flight from Jabiru, or four-wheel drive — for two hours — from the same town. Driving from Darwin takes 4.5 hrs. Visitors can also drive from the Gurig National Park, Coburg Peninsula, in 4.5 hrs. a four-wheel drive is essential, as is a permit from the Northern Land Council — but Davidson’s can help visitors with the permit. These days, 80 per cent of their visitors are Aussies.

Max Davidson, legendary buffalo hunter and safari guide, is the genuine outback character behind Davidson’s Arnhemland Safaris. He has been knocking around the Northern Territory for well over 25 years, and is described by Charlie, one of the traditional Aboriginal landowners, as a ‘black man in white man’s skin’. Charlie has taught him a lot about Aboriginal culture.

“We feel it’s a great honour to be allowed to stay here, let alone bring visitors to this special place. We’re taking extra care to make sure it’s respected and protected, as is wished by the traditional Aboriginal owners,” explains Max.

Davidson’s has been running an indigenous Aboriginal training scheme in Tourism Guiding — up to level three certification — for about five years. Their current indigenous guide, Frederick Bush, is close to level three now.