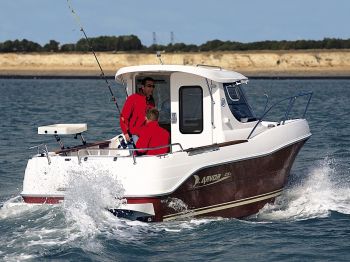 When the Modern Boating team initially laid eyes on the French made Arvor 20 now made in Australia  in 1999, our first reaction was here’s a no nonsense workboat that was going to make a good fishing platform for bluewater fishos. As it turned out it was, being both seaworthy and extremely economical to run.

But what it wasn’t set up for was an overnight stay. She had a small wheelhouse capable of protecting two, maybe three at a pinch from the elements, but that was about it. Don’t get me wrong, it was and still is an excellent boat to fish from, but as far as creature comforts go, forget it.

Recently, Sydney-based Collins Marine imported the first of the latest Arvor 25’s, a boat that goes about addressing its sister’s shortcomings in an extremely efficient way.

Yes, the 25’s also a seaworthy and economical to run bluewater boat, but within the extra five feet some dramatic changes have been made. The biggest of which the Modern Boating team have labelled The Tardis. Why Because just like Dr Who’s time machine The Tardis, her cabin looks tiny from the outside, but it s extremely spacious once you re inside. More about the layout later.

Out on the water the Arvor 25 was surprisingly spritely for a semi-displacement vessel of this style and size. She’s powered by a single 220hp MerCruiser shaftdrive diesel and pulled 29 knots at 3600rpm.

On the day of the test there was an honest 25-knot southerly blasting across Sydney Harbour, but the new Arvor took this in her stride. Weighing-in at more than 2500kg, plus the weight of 300lt of fuel, obviously helps the hull deliver a stable ride.

The mid-mount engine aids this stability, because the engine s weight isn t sited at the back of the boat, where it could act as a counter-lever on the bow.

Extending from the transom back about one quarter of the boat s length, the hull takes on a gull-wing shape that also aids stability and puts the prop in a mini tunnel. This gull-wing shape also affects the hull s turning ability. The Arvor 25 turns extremely flat  cat-like  she even leans out a little. To some this may feel a bit strange, but it doesn t detract from the boat s overall feeling of surefootedness.

The hull has a stainless steel keel protector and a skeg to safeguard the propeller. When underway the Arvor’s large down-turned chines force spray away from the hull and deliver a dry ride.

In a following sea the hull also produced the goods. She showed no tendency to broach even at displacement speed.

Although she’s only running a single diesel the boat produces a good wake that would suit a pattern of five, even six lures.

Plus, the steady thump, thump, thump of the diesel engine would certainly draw inquisitive marlin into the lure pattern in search of an easy meal.

A set of outrigger poles could easily be fitted and braced, because the cabin sides and roof are quite sturdy and you d still be able to traverse 360 degrees around the boat.

This boat is a centre cab with a difference. The cabin (Tardis) is split into two levels. The main helm station is to starboard on the upper level, with a stove and sink unit on the port side. The stove has only a single burner, but it s sufficient for preparing the style of meals that would normally be cooked up during an overnight stay onboard. The galley is also serviced by 100lt of (cold) freshwater, which is plenty.

Stepping down to the next level, there s a marine toilet in a small water closet beneath the helm, while in the main cabin area there are two full-length bunks with mattresses. These feature under bunk storage, plus there s a removable table between the bunks. There is also additional storage available on shelves around the cabin walls.

To enhance ventilation there are two opening hatches, one above the table and the other above the wheelhouse. There is also an optional sliding window on the starboard side for the skipper.

The helm station is surrounded by toughened glass and there are two windscreen wipers to clear the skipper s forward vision.

Instrumentation is adequate, but extra electronics would need to be mounted on the flat dash section to the left of the skipper s line of sight. This may make them a bit harder to read, but it shouldn t create too many problems.

Being a centre cabin boat there is 360 degrees fishing access around the boat, which is aided by the sensible positioning of grab rails mounted on the cabin sides.

At the bow, the split bowrail is high and gives added security when anchoring. On the test boat there was no anchor windlass, which would be a sensible option to fit.

The self-draining aft cockpit is spacious with folding wooden seats under each gunwale and a removable fibreglass cockpit seat across the transom. On each side of this seat are large lockers. Either can be set-up as a live bait tank if required.

A transom door opens onto the swim platform, which features a folding ladder and a wooden mount for an auxiliary outboard.

A sturdy grab rail is mounted around the top of the transom, but the piece de resistance, ideal for States where anglers are still allowed to set a few lobster pots, are two gunwale rollers. These take some of the hard work out of pulling up the pots.

Under the cockpit floor is a large kill tank. Directly behind the sliding cabin door is the engine box cover. While this encroaches slightly on cockpit space it is only minimal. It s also a good place to sit between strikes.

The boat features hydraulic steering, but there is an emergency tiller should things go wrong, which can override the helm.

There are boat hook/fishing rod racks under the gunwales and two stainless steel rod holders in each coaming.

The only downside to the gunwale set-up is that you have to lean forward to brace against them while fishing, but only slightly.

To help when fishing at night a light has been mounted on the cabin roof to illuminate the aft cockpit.

There is little doubt the Arvor 25, with its CE certification, is a strongly built boat. She doesn’t boast all the airs and graces that some other 25 footers do, but she’s not trying to compete in the luxury stakes. The 25 is a no nonsense work boat that can mix it out wide with the big guys and handle the rough stuff, while remaining a practical overnighter for two people  longer if you don t mind bathing in the sink or under the saltwater deck wash.

Engine Room
The Arvor 25 is powered by a 220hp MerCruiser shaftdrive diesel engine. On the day of the test the boat produced a top speed of 29 knots at 3600rpm. But an optimum cruising speed is 24 knots at 3000rpm.

The Arvor 25 has a 300 litre fuel capacity, giving it a considerable range at cruising speed. With the engine box cover off there is enough room around the engine to carry out daily maintenance without skinning your knuckles.