A large contingent of Australian companies are represented at the Dubai International Boat Show 2008 this March through a strong presence by the Australian International Marine Export Group (AIMEX).

“A number of our members are making progress in the market with UAE agents and distributors,” said Ms Edwards.

A trade mission has been organised from March 4 before the Show funded by the Victorian Government. The trade mission includes site visits, market briefings and networking events to promote Victorian marine exports and introduce members to key buyers in the UAE preceding the Dubai Show.

“At Dubai, we have members exhibiting as part of the AIMEX stand or through their own exhibition spaces,” said Ms Edwards. “In addition, a number of leading Australian exporters are represented through regional distributors and agents. “

In releases at Dubai:

GME is displaying its range of marine electronics products including VHF radios, emergency beacons and marine entertainment systems during the 2008 Show, its fifth visit to Dubai as an exhibitor. New products for the Show include the MT403 series of Emergency Position Indicating Radio Beacons (EPIRBs). The series reflects GME customer requests to change the MT401 series battery pack technology to permit the carriage of beacons as ‘non-hazardous’ devices. The change means a reduction in transport costs by eliminating the requirement for a DG freight declaration document prepared by an IATA accredited shipper. The new series has specially approved UN packaging. The MT403 range includes manual, auto release and GPS equipped beacons. The company’s products are distributed exclusively in the UAE by Zener Electronics Services.

Ronstan International is showcasing its range of high-tech Orbit Block™ systems. This comprehensive range of innovative racing blocks is aimed at the high-performance racing sailboat market. The Series 55, 70 and 40 will be displayed. Ronstan’s International Sales Manager Peter Dowdney said it was the company’s first visit at Dubai Boat Show.

Poly Flex Group is attending Dubai for the second time. The company said the 2007 Show was a great success leading to the appointment of a distributor, Turbomot Marine Engineering.

Aqualuma Underwater Lighting will reveal details of a new product closer to the Dubai dates. 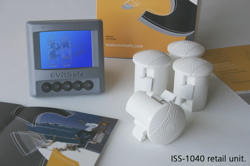 device which simultaneously detects multi gases including carbon monoxide, butane, LPG, nitrogen dioxide or hydro-carbons. ISS-1040 alerts via voice, audio and text of toxic gas presence, isolating the cause and providing solutions on how to rectify the danger. The company has won innovation awards at METS and IBEX.

Pyrotek is promoting Subdue, a construction grade composite panel board that provides boat builders with construction material and soundproofing barrier to airborne noise in one. It is the first time outside Australasia the product will be launched internationally. The company has also appointed a branch manager in Dubai.

Information will be available promoting the Sanctuary Cove International Boat Show 20th annual show staged May 22 to 25, 2008. The Show builds on last year’s record-breaking event which attracted more than 450 exhibitors and generated $A250 million in sales at or as a result of the Show.

Central Coast Marine Installations is showcasing the Wicked Wake Wakeboard Towers and accessories for the first time in the Middle East market.

MultiPanel has undertaken global expansion and has appointed agents and distributors in the UAE region including Pyrotek Soundguard and Cougar Acoustic and Trading Solution. The company now has Southern Cross Marine as a distributor for the UK region.