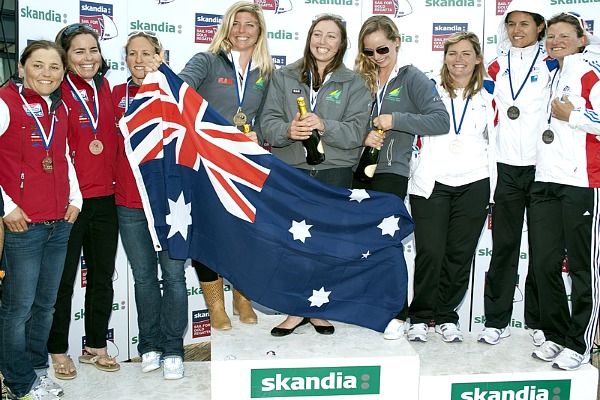 Australian sailors have won four gold and a silver medal on the final day of the 2012 Skandia Sail for Gold Regatta, the last event in Weymouth ahead of next month’s London 2012 Olympic Games.

The Laser class was first up on Saturday with Australia’s five-time World Champion, Tom Slingsby, five points clear of second place heading into the medal race.

In a tight final Slingsby took the race win and the gold medal, his fifth straight regatta victory at the London 2012 venue. Burton crossed the line in third to jump from fourth to second overall, claiming the silver medal on a count back.

“It was good day with nice breeze, shifty conditions and I managed to sail well,” said Slingsby. “I didn’t get the best start but halfway up the first beat I got a good set of waves, took the lead and managed to hold it from there.

“At the end of the day winning all of the lead up regattas to the Games doesn’t mean anything, it’s good for the confidence but I’d give up all five wins here for one good race at the Olympics,” he said. “Having won the worlds in Germany in light air and then racing here in the big breeze and coming out on top is a good confidence boost and shows that I can win in all conditions.

“I’ve still got a lot to improve on between now and the Games but luckily I’ve got the best training partner going around with Tom Burton,” said Slingsby.

Burton was at the front of the fleet all week with seven top 10 finishes from the nine races, but a tough first day of the finals series meant he had plenty of work to do in the medal race.

“It was pretty close for the whole race,” said Burton. “I was sitting in third or fourth the whole way around and it all came down to the last run. I needed to get past Great Britain’s Paul Goodison to get on the podium and I managed to get him just on the line.

“For the whole season I’ve been up there at the front and always managed to have a few bad results so it was good to come back from a tough day on Thursday and get up there today,” he said. “The Laser fleet is incredibly close, you can see it in the fact that the silver and bronze medalists here aren’t going to the Games.

The next Australians in action in a medal race were 470 men’s pair Mathew Belcher and Malcolm Page who were out to win their first regatta in Weymouth.

The pair, who have won the last three 470 World Championships, have finished second on three occasions in Weymouth but are in stellar form at the moment, winning their last seven regattas straight.

Belcher and Page sailed consistently well all week, finishing in the top four in all nine races to eventually take the win by five points.

“Going into this week we weren’t too worried about our Weymouth record,” said Page. “The last nine months have been phenomenal for us, our competition didn’t care that we hadn’t won here and to win this event wasn’t the main focus, it was all about learning the conditions and honing our racing skills, making Weymouth our home.

“The medal race went well for us, we had a three point advantage over the British and the plan was to sail with them and hope that we did better,” he said. “We thought that they know the area better than us, have sailed a lot more on the Nothe course so we’d let them show us the way. We managed to get into the lead after a good start and just went on from there.

“The last three and a half years for Mat, coach Victor and I have been all about dominating now, in the final year before the Games,” said Page. “It’s easy to say but hard to do and we couldn’t ask for better results than we’ve had so far this year.”

Nathan Outteridge and Iain Jensen made it five wins from five 49er regattas in Weymouth, though it was an incredibly tight medal race.

The Australians, who last month won their third World Championship together, went into the final race with an eight point lead over the French crew of Emmanuel Dyen and Stephane Christidis.

Outteridge and Jensen found themselves deep in the fleet at the top mark with the pair sailing exceptionally well to work their way back through the fleet. Eventually the pair fought their way back to fourth, holding off fifth by the smallest of margins, doing enough to win the gold, just two points ahead of the French.

“It was another tight one for us but we did enough to get the win,” said Outteridge. “We got rolled off the line by the French and forced to go right when the breeze went left which cost us on the first beat. From then we just kept chipping away, a few boats each leg and worked our way up to fourth.

“It’s great to get a fifth win here, especially so close to the Games,” he said. “We came here to work through a number of things, one of those being to go undefeated here in Weymouth, now we just need to make sure that doesn’t change at the Games.”

While their fellow Australians were competing in one medal race each Women’s Match Racers Olivia Price, Nina Curtis and Lucinda Whitty were in the midst of a full day of racing.

Price, Curtis and Whitty first took on Great Britain’s Lucy Macgregor in the quarter finals, progressing to the semis following a two-one victory. They came up against Russia’s Ekaterina Skudina next, with Price and crew getting past the Russians in two races, booking themselves a spot in the final against France’s Claire Leroy.

The Australians started with a win before the French bounced back, forcing a third and deciding race. Price, Curtis and Whitty came out on top, winning their first ISAF Sailing World Cup round together.

“It turned out to be a long day but totally worth it,” said Price. “At the moment I can’t even begin to describe the feeling. This event was one of those we focused on this year and to come away with the win was amazing.

“It was quite windy with flat water and we took the first race in a close finish but then got out of phase in race two and lost that one,” she said. “We gave it everything in race three, extending on the last run to win it.

“It’s always good to come away with a win but to do it at the Olympic venue, we couldn’t ask for any more than that,” said Price.

Krystal Weir finished the week eighth overall in the Laser Radial class. The Victorian went into the medal race 11 points off fourth position, with the leading sailors covered by only a handful of points.

Weir was fourth on the final downwind before a slight mistake dropped her to seventh in the race and eighth overall.