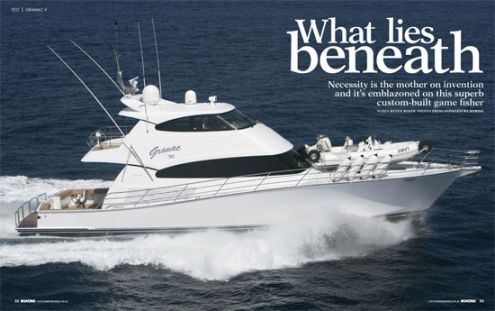 Necessity is the mother on invention and it’s emblazoned on this superb custom-built game fisher.

As the white sport fisher powers out through the Gold Coast Seaway, there’s nothing to suggest that this 76-footer is any different to its cousins. Except for the wide fish door in the transom, it looks like any other top-of-the-line game boat heading to sea for a day’s fishing. But she is different – very different indeed. This is a very special custom-built boat.

Gramac V was designed by noted New Zealand naval architects Warwick Yacht Design for Melbourne businessman Michael Vawdrey and was built by Azzura Yachts on the Gold coast. Michael Vawdrey – ‘Mick’ to his mates – had some very special requirements. He loves his fishing and already has a Randall 43 he keeps at Port Douglas and a Steber 34 in Melbourne. The problem is, it’s not easy to get around on these boats. You see, Mick is confined to a wheelchair.

CONFINED TO a CHAIR
The Michael Vawdrey story is one of determination and courage. At the young age of 24 the then-plumber and welder was involved in a car accident that broke his back. He was so strapped for cash that when it came time to leave hospital, Mick’s mates had a whip-around to buy him a wheelchair. But it wasn’t long before Mick decided to go into business for himself. He started building semi-trailers in 1974. Now Vawdrey Australia operates from a multi-million dollar facility on a 6.5-hectare site on the South Gippsland Highway at Dandenong South, in Victoria. You have probably seen some of his semis on the highway – they’re the ones with the ‘Vawdrey’ name on the mudflaps.

MICK’S BOAT
The Gramac V is, as its name suggests, the fifth in a line of boats called Gramac. It turns out that the first boat Mike’s father owned was named Gramac. But that’s a story for another time – the history of Gramac V is interesting enough as it is. Mick, understandably a perfectionist, knew exactly what he wanted in his new boat, and it necessitated a complicated build. Even before he commissioned the Warwick team to design it, Mick did a lot of the preliminary work himself. Laying the cabins and deck levels out on the floor at the back of his factory, he wheeled his chair through the mock-up, making sure that he could fit through, and that the cabins were roomy enough.

This meant that Mick needed a big volume boat with a beam at least 22ft (6.6m) wide. To keep the hull in proportion, it needed to be around 76ft (23.4m) in length. The next problem was in the engine room: Mick wanted to power the boat with two Caterpillar C30 1550hp engines, but there had to be enough space to wheel his chair between them without barking his knuckles. The process of solving such issues – taking the boat from concept to design – took a couple of years.

Gramac V will be based in Port Douglas and will spend much of its time out on the Ribbon Reefs following marlin and other game fish.

The Ribbon Reefs are a chain of 10 offshore coral reefs that extend from Cairns to Cooktown. But Mick likes to chase barra too, so he needed a short draft, not more than 5ft 6in (1.8M), so he could get the boat up some of the bigger rivers up north.

At 76 feet, Gramac V is a big boat. That means a lot of stairs connecting deck levels. There are stairs out of the cockpit where Mick’s special game chair sits, ready for action. There are stairs down to the sleeping accommodation and stairs up to the flybridge. But stairs and wheelchairs don’t mix. The solution? Install lifts! There are three lifts onboard and didn’t they present some headaches during installation – particularly getting the sensors and safety beams right.

An inclinator lift accesses the main saloon from the cockpit, while the main vertical platform lift services the saloon, the sleeping accommodation below, and the flybridge. There is a scissor-style lift from the main cabin up to the laundry, which doubles as a workshop. Sitting on the bench in this compartment is a chromed engineer’s vice. Now that’s a bit over-the-top. However, Mick tells the story that Michelle, his lady, objected to having a rusty cast iron vice in her laundry, so he agreed to chrome it. “She is still not convinced,” he says. At least he’s been able to keep his workshop.

The lifts give Mick access to all the important areas of the boat, making it a lot easier to get around than on the Randall. The main saloon and accommodation areas are easy to get to via the lifts, as is the cockpit, which is set up for fishing with the fighting chair and a very functional bait and lure preparation station. But it is lift access to the flybridge that makes this boating experience extra-special for Mick. He gets to drive his boat from the specially designed electric helm seat on the enclosed flybridge. It has an array of electronics including engine function displays, a radar scanner, a plotter/sounder and VHF and HF radios.

There is also a lounge where Mick can relax. And as he will be spending a lot of his time up there, he can be self-sufficient. The flybridge is set up so that if he wants a cup of tea or a cool drink he can look after it himself.

Building Challenges
Building Gramac V was not without its challenges; it required some special skills that only a custom boat builder such as the Gold Coast-based Azzura Marine could offer. Azzura’s general manager, Paul Wrench, said that unlike a production boat there is a lot of interaction between the builder, designer and the owner in building a custom boat. In the end the owner makes the ultimate choice and in this case Mick knew exactly what he wanted, right down to the fish steamer in the galley. Did we mention that Mick loves his fish and is equally passionate about catching them?

In his 30 of years in the industry Paul Wrench has built many custom boats. He describes it as “a passion”. No two builds are the same and when a custom boat is delivered, the look on the owner’s face is rewarding.

The internal fit-out of Gramac V may not be as elaborate as other vessels its size, but it has been built for one purpose with its wide passageways and roomy cabins, so it has been kept fairly simple and functional. Despite this, it still has that air of class that befits its pedigree. The focus, naturally, is on fishing. But Gramac V will double as a very good venue to entertain friends and corporate customers.

Gramac V was about 17 months in the building and I watched it take shape from its early beginnings at the Coomera factory. So, when the invitation to go out on the initial sea trials came, I jumped at the opportunity.

Sea Trials
The hull is constructed from lightweight epoxy composites and weighs in at 65 tonnes fully loaded. It has been designed for ranging wide offshore and, as I was to experience, it loves the open ocean. Cruising at 18 knots in a moderate sea the boat was very stable and ran easily. Even when the controls were pushed all the way forward and the GPS showed 29.9 knots it still didn’t want to bash and crash through the sea and it sat nicely in turns.

There are three other steering stations onboard for fishing and docking, and for such a big boat it was very responsive – a delight to drive. Set the revs to 1800rpm, about 18 knots, switch on the autopilot, and the boat will eat up the sea miles.

There are five fuel tanks onboard, holding a combined 8500lt, which at cruising speed gives the boat a range of around 495 nautical miles.

Many game boats get a reputation for being able to attract and catch fish – it’s called ‘raising fish’. It’s one of those mysteries of the sea – some boats have more success than others. Will Gramac V raise fish? Well, if the luck of the crew commissioning the boat is any indication, it’ll have the game fishing fraternity sitting up and taking notice. Not just for its looks, but also for the catch pennants it will be flying from the outriggers when it comes home from a day on the reef.

On a sea trial out from the Seaway, the crew – none of them fishermen of any note – threw a $4.50 lure on a metre-long wire trace out the back and in less than 45 minutes they had hooked up a 1.8m marlin.

When told the news Mick was very excited and now he is keener than ever to ‘wheel aboard’ his new boat. Gramac V will be sailing to Melbourne as soon as it is handed over.

Gramac V is a boat to be proud of and represents a new dimension in custom boat building.

After Melbourne, Gramac V will head up the coast to Port Douglas, where it will be based. ?