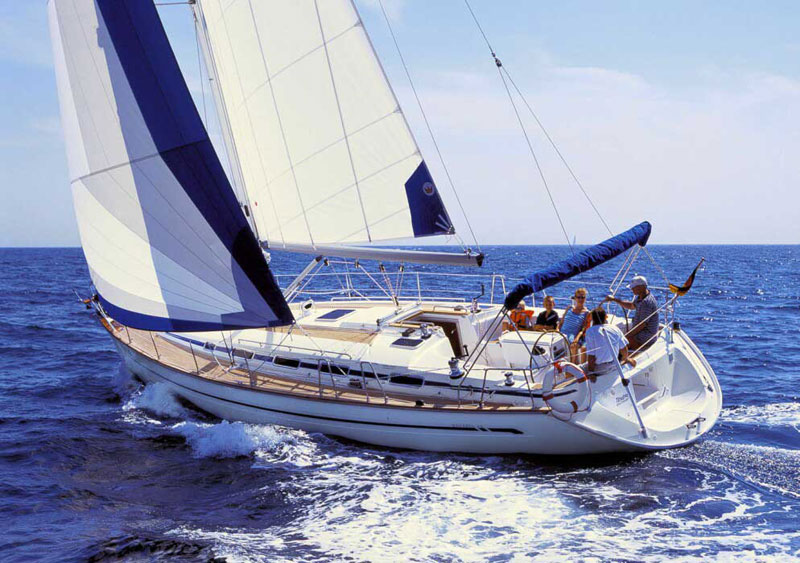 Ever notice that yachts reflect national characteristics? The French tend to be original and clever; the Brits a bit serious but seaworthy; the Americans are conservative and put value first, while the Germans can be classy Euro-sleek.

The Bavaria range doesn’t have a particularly high profile nationally in Australia, but is nevertheless a success among the ranks of the imports. This 44 replaces the 42 in the Bavaria line-up, and North South Yachting, on Sydney’s Pittwater, sold 26 of the 42-footers, a lot of yachts in this size and price category bracket.

The 44 has one eye on the charter market, as all yachts these days must, but it is an all-round cruiser/racer that works its way into a market segment that is proving to be a bit more than a niche.

North South sales manager Andrew Park reckons, and you can’t help agreeing, that the Bavaria 44 would be good at club racing, and at twilight racing, but the deck and cockpit layout make it a fine boat for entertainment such as a Sunday cruise with family and friends. As an example of the designer’s priorities, the twin steering wheels were adopted primarily to give guests easy access to the transom area. The fact that the layout benefits the helmsman is secondary.

The 44 offers a moderate-displacement hull (9600kg on a waterline length of 1.45m) on which a deep lead keel (1.95m) is an option. Standard is a 1.65m iron keel, which has a reverse profile – maximum chord is at the bottom – to support the substantial bulb. The drawings show that the rudder is very deep, almost as deep as the 1.65m keel.

The first things you notice when you step aboard are the large cockpit and the clear decks. The Bavaria is easy to walk around, whether you’re using the side decks or the coach roof, perhaps to the mast to see what’s going on, or from the mast back to the cockpit after a bit of work.

The mast is supported by twin spreader nine-tenths rig (the forestay attaches to the mast well below the masthead) with single lowers. The chainplates are tied to the keel structure by stainless steel rods, which are visible in the outboard areas of the saloon. The No.1 genoa has a substantial overlap, but the boat’s piece de resistance – electric sheet winches – overcome any objection that may arise.

Auxiliary power is by 55hp Volvo Penta with saildrive. I don’t know whether Volvo should take the credit, or yacht builders have had a sudden improvement in their understanding of sound deadening, but I’ve recently tried a number of these latest Volvos and they are incredibly quiet. On one boat recently I had to check the rev counter to make sure the engine was running, because I could hear or feel nothing.

Two layouts are on offer, and what you choose will be determined by what you intend to do with the boat, which is a statement of the bleedin’ obvious. The three-cabin set-up has a master stateroom in the bow, and two double cabins aft. In the more democratic (for charter, probably) four-cab layout, the master stateroom is diminished to the status of mere double cabin, and shares a bathroom with a small bunk-bed cab immediately aft.

The boat shown here has three cabins. The master cabin forward has the en suite and a lot of stowage, including a row of chest-height timber cupboards with positive-lock doors, mounted each side of the hull. Each cupboard is not too big, which is as it should be – you will put valuables in one, books in another, the spare underpants in yet another. There’s nothing worse, when living on board, than keeping your stuff in a bag, or lumping it all together in a big locker where you can’t find anything.

The galley is arranged in linear fashion down the portside. The work surface extends full-length, including a cover over the stove, which hides the cook top when not in use. The surface itself is a Corian-like substance in a surprisingly bright blue, which provides a classy contrast in the mahogany interior.

The dinette is to starboard. The double seat unit mounted near the boat’s centreline – which provides a modicum of security for the cook when the boat heels to starboard (port tack) also lifts to reveal a sizeable stowage bin in the base.

Aft of the saloon you will find the second bathroom on the portside and the decent-sized navigation area to starboard.

The two mirror-image double cabs aft have deep shelving on the hull sides, and a split locker, with hanging space behind one door and shelving behind the other. Opening hatches mounted in the front faces of the cockpit seats provide ventilation.

Out on the water only the sheet winches are electric. “You use the main halyard only once, but you wind on the headsail sheets the whole day”, says Andrew Park.

But when he raised the mainsail halfway, he led the halyard aft to the starboard primary and let the electric Harken do the hard yakka, because it is an easy and natural lead for this halyard.

The traveller is ahead of the companionway; the tails lead back to cams each side of the companionway. This cockpit is easy to enjoy. The coamings are wide enough to lounge on, the seat backs are slightly angled and all edges are rounded.

The twin greenhide-bound wheels open up the cockpit and it is indeed easy to walk through to the sugar-scoop stern, which has a useful fold-down swim ladder.

There’s a moulded table on the centreline, featuring drop-leafs and an icebox in the centre section. Lift the seat lids either side and you will find big lockers for sails, fenders and whatever else you can’t live without.

In a strong shifty breeze, particularly, steering from the leeward wheel is bliss because it provides a panoramic view of the headsail and all its telltales.

On the pedestal ahead of each wheel are the in-out buttons for the electric winches for headsail trim – more bliss, and another reason for steering from the leeward side because, again stating the bleedin’ obvious, the leeward winch carries the loaded headsail sheet.

With an 11.45m waterline and 4.25m of beam, this is quite a big boat and it moves like one, engendering a strong impression of power. She feels quite stiff – Andrew Park put that down to a high ballast ratio, but my calculator suggests that 3000kg of ballast on a 9600kg total is a moderate 31 per cent.

We had a wide range of breezes, as the light nor-wester went into the east with a weird-looking change coming up behind. In the lighter airs we saw 5.7 knots in 10.1 knots of breeze at 40 degrees and a fraction over 6 knots as we eased sheets slightly. The breeze built and the Bavaria increased speed and power, but she was easily sailed by two under the full headsail, because those electric winches did most of the work

The Bavarian 44 has a lot going for it. It has the German reputation for quality – the lustre of BMW and Benz can only help with marketing a German product – and there’s a lot of dockside cred – the boat looks fast, purposeful and expensive while sitting at the marina. She’s easy and comfortable to sail but there’s enough edge to the performance to gain and hold the skipper’s interest.

Perhaps a good indicator to the Bavaria’s double role in life is that the test boat’s owner had specified good-quality local sails by Quantum, and had stuck on the boom an outhaul tension marker.

This Bavaria yacht is obviously intended to race on Saturday, cruise on Sunday. But the clincher is probably the fact that the Bavaria is excellent value for money