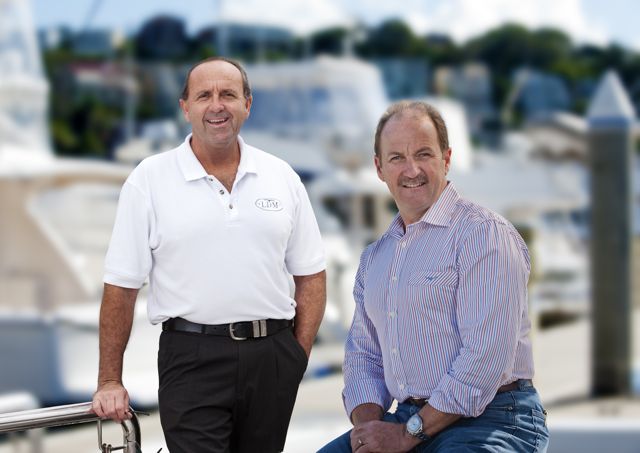 All great luxury brands are almost invariably created from a singular premise: the dogged, single-minded pursuit of excellence. In the case of Belize Motoryachts, it’s the result of two men’s desire to be innovative, to produce something memorable, timeless and unique, the realisation of a dream borne from decades of front-line experience and hard yakka.

As always, the provenance of a brand’s founders is paramount. The quietly-spoken Wes Moxey began his decades-long career as a Shipwright at Carrington Slipways in Newcastle before making the move to the Gold Coast to establish a boat repair business. Hired to work at the Gold Coast-based Riviera yard in New Product Development, Moxey studied the production of Grand Banks in Singapore before they were constructed under license in Australia, then worked his way up to the position of CEO at Riviera. Following 26 years of service at Riviera, Moxey departed for an extended sabbatical on his cattle farm in northern New South Wales before deciding to pursue the next great chapter in his career.

Serendipitously, at Riviera Wes met his future Belize co-founder Lee Dillon, who was with the Gold Coast yard from its inception in 1980. Dillon, a retail expert with a stellar reputation for outstanding customer service, was Riviera’s leading boat dealer from 1980-2005, creating numerous sales records. Subsequently, Dillon worked in Riviera’s management and attained a position on the board before resigning in 2008 to take, like Moxey, a well-deserved sabbatical.

With almost a quarter of a century’s experience working together, both men had unwittingly formed a symbiosis in thought; a combined vision to create the ideal boat, a brand that would stand for character, individuality, distinction and authenticity. “Both Wes, a respected boat builder, and myself have returned to the industry for similar reasons,” says Dillon. “We share a passion for boats, a passion for quality, integrity and service. Accordingly, we recognised that there was a need for a growing client base – ardent boaters that love tradition and ageless style, but require individuality and bespoke options – to be serviced with an extremely high quality motoryacht.”

To begin with, Moxey and Dillon outlined what it wouldn’t be. It wouldn’t be another vanilla production boat crammed with toys, an indistinct, anonymous vessel. Nor would it be another ubiquitous boat, mass-produced with thousands of siblings. A great many customers and friends Moxey and Dillon had dealt with in their past lives had a number of the same brands and styles of boats. Yet Moxey and Dillon believed in the post-GFC era people would still be dedicated to buying Australian, or Australian-designed, cruisers – especially if limited in production and custom-built to bespoke specifications. The pair reasoned they were determined to give discerning boating enthusiasts an opportunity to consider an alternative: a manufacturer here for the long term, and a family-owned business that would look after the product without any question whatsoever, including unparalleled customer service, maintenance, half decade-long warranty and valet facilities. The Belize 52 would be, maintains Dillon, “A boat for people who know they want something better than what they’ve experience before.”

Style-wise the Belize 52 would be a cruiser influenced by heritage and tradition, in particular, the soul and spirit of classical wooden European boats from the Art Deco eras of the 1920s and 1930s. “There’s a lot of fibreglass in the world,” says Moxey, “we want to stand out.” Engineered according to the highest specifications of 21st-century technology, the Belize would have to be comfortable, too – a veritable floating Eden, with every possible luxury afforded to its owner and guests. To achieve these ends Moxey and Dillon called upon leading designer, Steve Ford (ex-Sunseeker, United Kingdom and Riviera, Australia), and externally- contracted designer, Giorgia Drudi (ex-Ferratti Yachts, Italy), to conceive a flawlessly beautiful boat that had European style, American sizing and Australian pragmatism. “Both Lee and I like traditionally-styled boats,” admits Moxey, “and we certainly don’t like the philosophy of ‘glitz today and gone tomorrow’. So, we’ve tried hard to ensure the Belize 52 is timeless and ageless, but at the same time bringing the past to the future.” Adds Dillon: “That’s what we want to achieve – an alternative motoryacht that is a safe alternative, that doesn’t look like all the other alternatives and offers similar comfort in the way they go boating.”

Perhaps, most importantly, from a commercial perspective, as a brand Belize would be truly global, with a collection of limited-edition boats (no more than nine produced in the first year and building to 30 boats per annum by 2015) equally appealing in the well-educated boating markets of Europe, the US and Asia, as it would be for Australians. Says Moxey: “For us it’s not about building an Australian boat. It’s about building a niche, global boat that is a fit to all markets and sensibilities.”

The Belize name was proposed by Dillon after a friend returned from a cruising expedition along the eastern coast of the South American region. With its idyllic Caribbean waters, 174 mile long barrier reef and 1000 seductive white-sand islands, the geography and appeal of Belize was rightfully considered a perfect brand alignment. Dillon market-researched the name and discovered the chic-sounding Belize name would be individual to their brand. (The red-coloured Belize logo appearing on the side of the boats stands for “B” or “Bravo” on the international flag chart.)

Yet, for all of this foresight, Moxey and Dillon knew the brand would only be as good as their manufacturing partner. Determined to source a partner with skill and integrity, the pair visited a great deal of shipyards in Asia before settling on Kha Shing Enterprises in Kaohsiung, Taiwan. Fully ISO-certified, family-owned and with a heritage of artisanal-based boat-building, Kha Shing is the perfect collaborator. Today, Moxey, a boat builder himself, spends significant time in Taiwan with Kha Shing, working side-by-side with the artisans constructing Belize’s hand-built motoryachts.

As Moxey commented recently: “Everything we have done through the set up process has been designed to minimise risk and maximise the quality outcome… we have partnered with the leaders in their respective fields. Lee and I are like a family business. It’s just he and I, it’s not a corporation and we don’t have shareholders to appease. And we’re doing it with our own money and in our own time frame. So that’s why we have gone to such lengths to get it right from the outset.”

Belize Motoryachts – not just a totally new experience, but the launch of an authentic, exceptional boating marque, grounded in tradition and forged for the modern era