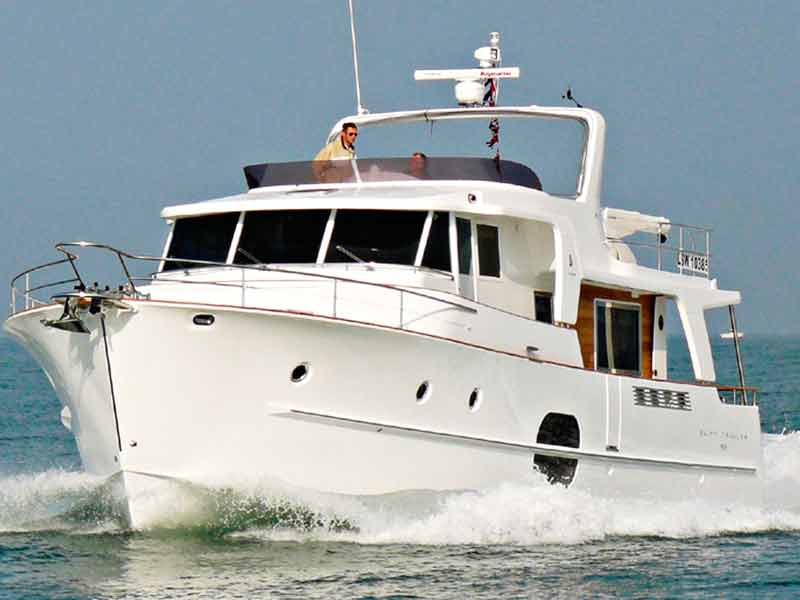 “There were fifty Americans ready to test the Beneteau ST52 yesterday, but they couldn’t the seas were too rough,” JW Marine’s Adam Waters explains on the train from Paris to Nantes.

Adam is my host for a few days’ touring through various Beneteau factories. Our trip will culminate with our own test of the Beneteau ST52 weather permitting.

A significant section of the route to the west coast of France traces the River Loire, which seems to have quite a current  perhaps the effect of the same storm off Brittany whose aftermath had prevented the 50 Americans from experiencing the ST52 in full flight. I watch rowboats straining their tethers as chunks of debris hurtle rapidly downstream, while Adam fills me in on the history of Beneteau and JW Marine, the family company founded to bring Beneteau powerboats to Australia.

The road to Mecca

We are on pilgrimage to Mecca. The gorgeous seaside village of Saint-Gilles-Croix-de-Vie, part of the central western coastal department (or ‘county’) of Vend?e, is prime Beneteau country. Look long and hard at the multitude of boats moored in the marina there, and you’ll have a hard time spotting the handful that weren’t manufactured by Beneteau.
As they bob peacefully in the evening, you don’t realise that the change in tide can be so dramatic ? until you see them sprawled akimbo on the mudflat the following morning.

The reason why there are so many Beneteau boats here is because this is where Beneteau began. Some 120 years ago Benjamin Beneteau built his first trawler, a sardine boat for the local fishing industry. Indeed, the Beneteau Group’s corporate headquarters overlooks the ocean on Rue De La Mer.

We need a good night’s rest before we start touring factories the following morning. We’re staying at the Hotel Le Ceitya, so brand-spanking new that its two-star review seems a bit stingy. “If there is no elevator and I have to lug these suitcases up that spiral staircase,” I reason, “I’d be docking the place a star as well.” The other feature working against the hotel, you realise as you lean on your luggage to catch your breath on the first floor landing, is the hotel’s aesthetic: stark chocolate brown walls and carpet surround hot pink doors. I wonder if I’ll dream of Fry’s Turkish Delight

Wooden heart
The following morning begins with a drive to Beneteau’s Head Office in the next village along the coast, Saint Hilaire De Riez. This is the ‘heart’ of Beneteau, since the same premises house the company’s joinery. Though the boats themselves are now built of fibreglass, all fittings and trim are still made of wood. At one end of the factory are piles of plywood, lengths of blonde oak, beech (for the time being, replacing the more difficult to obtain teak) and moabi. At the other end are the bundled ‘kits’, ready to be shipped to the various factories, to be assembled into boats. Each year sees the production of 4500. Here, as with the other factories where we will see boats being put together in various stages, you can’t help but note how many employees turning wood, spraying fibreglass, affixing trim, driving forklifts, testing wiring, tapping every centimetre of hull to ensure there are no defects are in fact women. Beneteau employs a higher percentage because, they say, they are more meticulous in their work.

After a couple of days’ touring, in which we’ve seen every stage of boat production taking place across a range of boat types in three different factories, we make our way south along the coast to Port Olona where we will test the ST52. ‘ST’ stands for Swift Trawler, again, significant in terms of Beneteau’s history. Benjamin Beneteau’s original wooden boats were trawlers traditionally slow fishing boats. But to be blunt about it, the ST52 has been ‘sexed up’.

New York living
Unfortunately, it’s another grim, grey day and I can’t help thinking of the 50 Americans who didn’t get their turn. They didn’t expect to all get on at once, did they? When we finally get to the boat, I realise that you could just about fit 50 Americans the big, touristy variety if necessary on an ST52. Admittedly, some of them would have to be content to travel in a storage locker or in the lazarette, but everything is so big on the ST52 that they’d still be riding in comfort.

“A New York apartment” is what the interior of a Beneteau boat is often likened to, but to be honest, the Beneteau boat is much nicer. You could live comfortably in this one sliding double doors at the boarding platform give way to a big, open saloon. A U-shaped benchseat sits to port, around a height-adjustable table, while a retractable bar unit with an optional widescreen television faces it to starboard. On either side of the unit is a comfy armchair. Side windows, with blinds, are flanked by two cute little lamps which, along with the overhead lights, give the fruitwood-stained moabi woodwork a warm glow even on this grey day.

The saloon opens to a big, U-shaped galley to port, equipped with an expansive work surface, two-bowl sink and drainer, three-burner cooktop plus gas or microwave oven. There is ample stowage space with shelves and cutlery doors, plus a 172lt fridge and 46lt freezer. Beyond the galley, access stairs lead to the wheelhouse.

The wheelhouse offers ample room to hang with the captain. Our skipper is Bertrand Denquin, Beneteau’s chief boat tester. He’s brought a mate with him, a professional fisherman who was probably brought up on the original slow, wooden trawlers.

If we wanted, we could all sit side-by-side on the long benchseat in the wheelhouse, but it’s more fun standing around, watching the various gauges and indicators, not to mention the CCTV screen taking a feed from the rear camera ? enabling the captain to back into tight moorings ? next to the SatNav.

There’s access to the flybridge from both the wheelhouse and the boarding platform, but by the time we’ve actually ‘set sail’, it’s raining heavily and hatches have been battened down. Good thing, too I’ve no intention of swabbing the deck later on.

The flybridge seems to have everything the wheelhouse has, plus its own miniature galley: a work surface with a sink, cold/hot water tap, icebox plus provisions for an electric grill.
The race home

Once we’ve passed the breakwater beyond the marina, the ST52 comes into its own. It’s clearly a very good cruising boat, but Captain Bertrand puts it through its paces. By the time we’re out on the ocean, we’re riding wild, choppy waves with a four-metre swell. The ST52’s cruising speed is 18 knots, but even on this rough sea she still manages 24knots at 2500rpm.

Bertrand’s mate loves it no doubt, in past years when working in these conditions, prayers were needed to ensure a safe passage home. We could easily stay out here ? a stairwell at the front of the wheelhouse leads down to the cabins, and they are, once again, big and comfortable. No doubt I’d get the port cabin with the bunks, rather than the central ‘owner’s cabin’ with its huge island berth and writing desk to one side. Even the forecabin’s V-shaped berth can be converted into a large double bed.

All too soon, it’s time to turn back, otherwise we will be drawing straws for cabins: at high tide, that swell will be closer to shore, making it nigh impossible to get the boat back past the breakwater. If anyone could do it, it’d be Bertrand, but he knows better than to take a chance on such a beautiful boat.