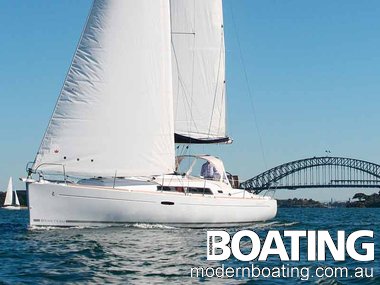 To the casual observer, the world of the production yacht may seem straightforward, manufacturer A builds A-type boats, manufacturer B builds B-type boats. A and B may seem superficially similar, but a careful look at the specs, and a quick comparison at the Boat Show, will confirm that no two are alike.

But it goes much deeper than that. Buyers have fickle tastes, or tastes that continually evolve (not necessarily the same thing) so boatbuilders must watch the trends constantly and adjust their products to suit.

As well as swinging worldwide trends, there are national differences in taste. As Vicsail’s Brendan Hunt points out, tastes in Perth and Brisbane differ from those in Sydney. Who’d be a product planner?

But I love this stuff and so does Brendan, whose job it is to keep up with trends or, preferably, get ahead of them.
Which brings us to the Oceanis 37.

Once upon a time, a Beneteau was a Beneteau. Over time, the company developed two lines, the First range of racer/cruisers and the Oceanis cruisers.

That simple arrangement was thrown into disarray by the arrival of the roomy Cyclades cruiser/charter boats. That enabled the Firsts to become even racier, and the Oceanis to evolve from pure cruisers to cruiser/racers. Confused? Concentrate. It’s not that hard and there is no test at the end of this story.

So the concept of the Oceanis as a pure cruiser is dead. For this 37-footer, designers Finot/Conq gave the hull a beamy stern and a high-performance keel (a backwards L in profile) made of cast-iron. They placed the chainplates and shrouds right out on the gunwales, providing good support for the mast, an arrangement that limits the length of the headsail and so restricts the area. This makes the headsail relatively easy to tack, a good idea on a family boat; a good idea on any boat, for my money?anything to reduce the drudgery of winching.

This rig layout is standard practice on grand prix boats, but it also works well on cruisers because it is simple. The mast needs to be a little taller to recover some of the sail area lost by the small headsail, but the wide shroud base helps support it.

Modern accommodation
The accommodation layout is classic modern, an owner’s cabin forward, two double cabins aft. This boat’s stern is so wide that in the starboard aft cabin the berth is almost as wide as it is long. And you can lie in bed and watch the waves astern, through the opening port in the transom, a luxury enjoyed by the likes of Cook and Flinders and Bligh, but few yachtsmen since.

Beneteau offer a two-cabin option, where the aft cabin features a transverse double berth and frees up room for a sail locker on the starboard side.

There is one head, aft opposite the galley.

The saloon is downright classical in configuration, from this company which is capable of radical interiors in the First boats. The table is on the centreline, with drop leafs, surrounded by a simple dinette and settee seating arrangement.
More than 20 years ago Beneteau invented the user-friendly galley. More accurately they introduced design details which made life easier for sailors and they still come up with new ideas for interiors. In the benchtop there’s an icebox which doubles as a crockery storage. You can put the beer here, or if you want to sail before you do the washing up, stick the dishes in here.

And another new idea: Behind the settee is a small table lamp. You can lift it out and take it upstairs and plug it into a socket in the cockpit table for atmospheric dining al fresco.

There’s a third new idea: A clear washboard lives in a groove beneath the main hatch. Pull it aft and it drops down into place. Easy to do when closing up after a sail, and it encourages you to do it early if the weather’s getting nasty, rather than put it off until the cook is getting wet. And the fridge is a surprise, a domestic model with shelves in the front-opening door.

Setting sail
This Oceanis has a big cockpit. It is wide and it is long, not always the case with European boats. This feature alone makes this an ‘Aussie’ boat.

The wheel is big but there are cutouts in the cockpit seats so you can walk around easily. Alongside the helmsman the portside seat lifts up to take a small inflatable tender, or the liferaft.

The Harken #44 headsail winches are near the wheel and can be reached by the helmsman. On the coachroof are the winches, which handle all the boat’s control lines. Brendan says that a common option is an electric winch on the portside here to help with the mainsail halyard. The standard anchor is a Britanny type, a sort of heavier Danforth.
The 30hp Yanmar (with shaft drive) is quiet and easily pushes the hull up to 7.3 knots and still accelerating. We wonder if this boat has a bigger motor option. No, we find out later.

Easy to steer
This Oceanis’s steering is as good as it gets. It is light but not too light, and quite high-geared; offshore heavies prefer slower steering, but most of your yachting will be inshore, in confined waters, around marinas and dodging a lot of other boats, so for my money the faster the better, to a point.

Easing her to windward in a fitful sou’wester was an absolute joy, made easier by the fact that I could see the telltales from the wheel’s windward side. The teak foot supports are big. I would like to tell you more but the morning’s sharp offshore breeze was squeezed out as the day warmed up, and we ran out of wind. The Oceanis has only a modest amount of sail, but she did well in the light breeze.

Single-handing is easy. The skipper can reach the headsail winches, and Brendan let her sail herself for minutes at a time in the breeze as he fiddled with the gear. It was his first sail on this brand-new boat.

Price? The base figure is $285,000, a little below market standard for this size.

So who will buy the 37? Refer back to the start of this story. This boat now embraces much of the philosophy of the cruiser/racer. Any boat can be sailed as a club racer but the 37 will fill the role with some flair as she slips happily through the water, she has good stability and is fun to drive. She will probably do best with a bit of breeze, and a few bodies on the rail.

As a social sailor, her cockpit is large and the skipper can do the work without disturbing the guests.

For her role as a cruiser I wish I knew how she would handle a bouncy sea offshore. In a perfect world, these sail tests would provide all possible weather conditions in one day. But a perfect world, I have found, can be elusive.