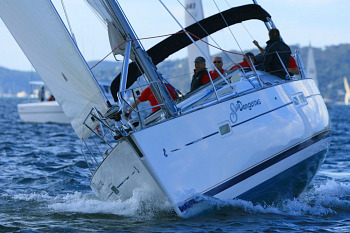 The Beneteaus took over Pittwater, or as the locals call it, “shift water”, on Saturday for the 10th anniversary of their annual regatta which brought together a fleet of 32 for the tricky six nautical mile race.

Fathers and their young sons, husbands and wives and friends who have been sailing together for eons came together with sailing’s elite for a day of camaraderie and good times, with only the faintest whiff of competitiveness blowing about.

The overnight drizzle cleared at daybreak and by the 1pm start the light nor’wester had started to shift around to the nor’east as dark clouds circled Pittwater, cooling temperatures and providing some soft local breezes up to five knots to play with.

Knowing the forecast, Jamie Neil’s First 47.7, Crone of Silence, opted for the lighter crew weight by having plenty of kids aboard, and also went to the extraordinary effort of removing the teak saloon chairs and leaving them on the dock as part of a strategic strip-out prior to racing.

With a fifth on handicap, it could have factored in the bigger boat’s result.

Neil wasn’t the only skipper looking for an edge, a super keen Allen Stormon was spotted in the water early Saturday morning at the Royal Prince Alfred Yacht Club with a mask on and a cloth in his hand rubbing the growth off his First 34.7, Sweet 16, prior to the much anticipated match-up with the new generation First 35, Eugenie.

For the record, Sweet 16 finished fourth with two sweet points between it and Eugenie once the handicap results were tallied.

The non-spinnaker fleet got away cleanly at 1pm on Saturday leaving some of the spinnaker division to dig a hole for themselves.

Barry Jackson’s Alibi was caught out in a bunch up at the start boat end of the line and in slow motion t-boned the committee vessel mid-ships with their spinnaker pole, bending a stanchion and damaging the timberwork, not to mention taking years off the race management team.  An alibi is not going to help them either – it was all caught on camera.

While Alibi was tangling with the start boat and others in the high traffic area were generating plenty of hot air, Gerry Hatton’s First 40.7, Bushranger, slipped away unchallenged, executing a text book start to be neck and neck with the bigger Sledgehammer out of the starting blocks.

They tried to fly under the radar but Bushranger’s A-list crew were outed when they made such light work of the start and went on to blitz the fleet, finishing just under two minutes ahead of Ron Jones’ First 44.7, Sledgehammer, on corrected time in the spinnaker division.

Team New Zealand’s Billy Merrington took the opportunity to show his seven-year-old son Oscar his world. “It’s nice to get away from the pace of the grand prix circuit and sail with my friends, and show Oscar what I do,” said the Sydney northern beaches based hot shot.

Merrington will head back overseas shortly for the next stage of the Louis Vuitton Series.

Also aboard Bushranger were offshore gurus Michael Fountain, who called tactics for his father-in-law Gerry, and Scott Lawson – both with their young sons aboard – and Brett Filby, best known from his days aboard the mighty Tow Truck, and who never seems to be short of a ride.

On their win, Scott Lawson said: “We just followed the rain clouds and the local breezes and tried to minimize the tacks”.

Bushranger was one of five 40.7s on the starter’s list, but the only one to impact the top five in the spinnaker division.

It’s an in-joke that the second placed Sledgehammer was nicknamed Sledgehammer Le Billet for the regatta given the number of sails on loan from a generous Bill Ebsary, owner of Le Billet which placed third in division.

Carl Crafoord, crewman on the 2008 Rolex Sydney Hobart overall winner Quest, lent a hand on Robert Jude’s First Light, serving lunch and making tea and sharing some of his knowledge before attending the prizegiving dinner that evening where his donation of a 9oz Quantum Sails spinnaker was awarded to Ropabull, a First 42s7 owned by the colourful regatta regular Michael Roper.

Reputations were on the line for the organiser and director of Vicsail Pittwater, Shane Crookshanks, who jousted with Ivor Burgess’ Still Dangerous and came out on top in the line honours chase with Joss, but diplomatically conceded and took himself out off the results sheet leaving Ivor ‘the tiger’ to finish off the podium places on corrected time.

There was one blow-out on the day, hard to imagine given the 0 – 5 knot wind range but true. Mid-race, iconic TV personality Ian Turpie, the regatta MC, tried to open a bag of chips from the top but exploded the contents out the bottom of the bag, providing plenty of on board entertainment for the crew of Joss.

With the Beneteaus all tucked up in their berths and crews showered and changed (well most) the day ended with the prizegiving dinner that evening at RPAYC. This is where the regatta’s secondary name, ‘the talk-it-up-Cup’ became a reality, the stories getting more and more colourful as the huge array of novelty and racing prizes were handed out to the worthy winners prior to the crowd kicking up their heels on the dance floor.

One of the many lucky dip prizes on offer was provided by regatta sponsors Zanussi and J.L.Lennard with the choice of an Electrolux dishwasher or front load washing machine going to the delighted winner,  a crew member from First Light.