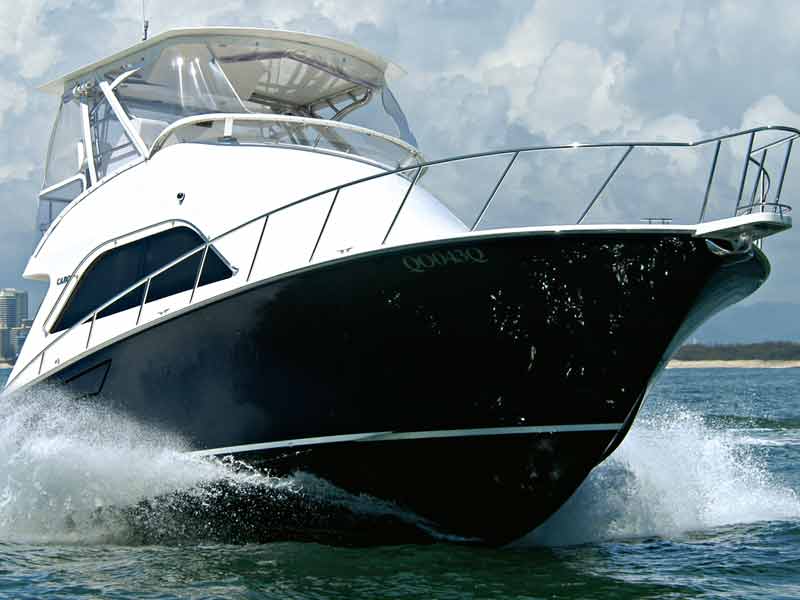 Workmanship and performance go hand in hand on a Cabo

The Cabo 43 Flybridge is a bit of a dark horse. There may be a few 43ft flybridges on the market, but look closer at this vessel and you would swear it was a custom-built craft.

There is no doubt that the Cabo 43 has been built for sportsfishing, but even so, if an owner wasn’t that way inclined it would still serve as a very nice cruiser.

The heart of a sportsfisher is the cockpit; so let’s start there. As you step through the transom door it is impossible not to notice the big stainless steel hinges on the door and the folding top rail. Then have another look, all the slotted bolt heads are lined up, in the industry it’s called headed. Off the shelf hardware has not even been considered here. The custom-built door and top rail are just the first examples of the attention to detail and craftsmanship that has gone into this craft.

Men behind the boat
The owners of Cabo, Henry Mohrschladt and Michael Howarth founded Pacific Seacraft and built world class, globe-circling sailing boats. The company was sold and the pair made the seamless transition to building powerboats, because there was nothing in the sale contract that said they couldn’t build powercraft.

So, it follows that much of the sailing yacht builder’s art has been continued in their powerboats. The Cabo marque burst onto the market in 1991 with the 35 Flybridge. It was a boat that made the builders of the more well-known makes sit up and exclaim, “where did that come from?” Cabo has since expanded with a 45 and 47 and now the 43.

Cabo has introduced a completely different hull with the 43. It’s the result of many hours of tank testing with different hull variations. Cabo has produced a 43 hull with some unusual characteristics – it’s a hull that runs drier and smoother than many larger boats.

No Strakes
For starters there are no running strakes between the chine and the keel, the hull is clean and smooth with a constant 18.5-degree deadrise all the way aft. Most boats have a deadrise that varies as it moves aft.

It may be called a 43, but with an overall length of 46 feet and a 15ft beam it’s a big volume boat that gives the impression of being much bigger than it is.

The heart of any sportsfisher is the cockpit and in keeping with the Cabo philosophy there is a place for everything. There’s the traditional bait preparation station, lockable tackle locker and freezer next to the engine access door and more a rod and gaff storage in lockable side lockers.

The glass-fronted bait tank in the transom can be divided into a tuna tube on one side and a live bait tank on the other. Optional LED lights are also available to light up the tank at night and turn it into an aquarium.

There are a couple of kill tanks in the cockpit floor. The lids, on full-length piano hinges, fit so well that it’s impossible to slam them down ? no matter how hard you try, and I tried.

There’s a plate to mount a 130kg fighting chair in the cockpit floor and the padded coamings are just the right height. But it doesn’t stop there, the padding covers are zippered so the foam can be taken out if it needs replacing and there’s mesh sewn into the underside of the covers to let it all breath.

This boat had a solid hull colour and when water runs down the side of the deck it can leave unsightly white streaks on the hull. Cabo has solved this problem, they have added small, clear flaps at deck level that direct the water away from the hull. Unless they are pointed out, the flaps are not readily noticeable. Just more attention to detail.

In the saloon
The main cabin is simple but classy with a teak finish. Another example of the yacht builder’s art are the teak plugs, which hide the screws in the wood.

An L-shaped dinette sits one step up from the saloon with a teak and holly floor and an L-shaped settee. Big windows, particularly in the aft bulkhead, open the cabin up so it’s light and airy.

But it’s the switch panel that an owner will gladly show off to his friends. It’s the neatest I have seen with all the wires meticulously laid out. You would be pushed to find a better one on a mega yacht.

The galley is compact and all the cupboards are lined with carpet! It is equipped with a deep sink, a knife drawer and drawers for cutlery and other odds and ends, a large rubbish receptacle, freezer drawers, fridge, cooktop and a microwave.

A set of steps leads down to the accommodation, the steps also lift up to reveal a washer dryer. The master cabin has a fore and aft double berth and an ensuite with full shower and an attractive swirl pattern on the bench top.

The day head is opposite and up front are three bunks with plenty of drawers and cupboard space for the boys. The bottom bunk is a three-quarter and is big enough for a cosy couple.

While most flybridge designs are now going for steps, Cabo has stayed with a ladder to the flybridge, I guess they reckon that any one who goes fishing offshore is still fairly athletic.

Despite this the ladder is easy to negotiate and I managed to descend facing away from the ladder without any trouble. Again the design of the flybridge is simple and modern with a lounge in front of the helm station and one down the side opposite.

The helm station is set back at the flybridge so the driver can get a good view of the action out the back.

On most flybridges the driver’s view is often restricted by the helm seat, especially when fishing and looking aft. Cabo has solved that problem too; the back of the pompanette seat lifts off out of the way.

The helm station is compact with plenty of room for electronics. Cabo may have overdone this a bit because there is room for more screens than is normally needed these days. However, if the owner wants extra screens there’s room for them.

Cat Power
The electronic controls for the Cat C12, 770hp engines are mounted either side of the wheel in Palm Beach fashion and in true game-boat style.

The hardtop is an option. It’s a copy of the US version but built here in Australia and the excellent stainless steel framework complements the boat. It’s a fine example of what Australian craftsmen are capable of as well.

The Cabo’s ride is soft, even out through the Gold Coast Seaway during the week, and I was surprised just how nimble the boat was. It handled like a smaller boat with a big boat ride.

The steering was very light and predictable. Put the boat into a turn and then quickly turn the wheel the other way and the boat just followed without the slightest protest. It was as if it was saying, “you want me to go that way now, OK.” It backed down quickly too.

Once on station with the lures set the boat runs easily at 830rpm and 8.7 knots using an economical 11lt per hour per side.