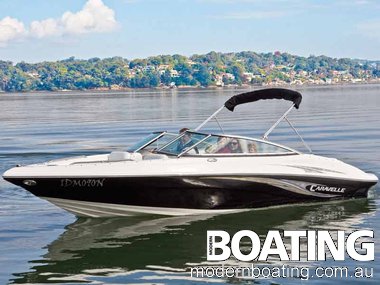 Lifestyle, family and fun are the bywords of recreational boating these days. It’s a formula the Americans grasped more than 20 years ago and while we were a little slow on the uptake we have now well and truly caught up. It seems that the humble bowrider (a boat the Americans have designed and refined for decades) is now the family boat of choice in this country.

Today, there are hundreds of bowriders on the market in various shapes and sizes, but they all share a similar layout, so when a relative newcomer to Australia gains general approval almost overnight, it says a lot about the boat’s build, quality, ride and performance. The Modern Boating Best of the Best awards’ judges certainly thought so and named the Caravelle 196 Bowrider the 2008 Best Imported Boat (Under 24ft). I am pleased to say that the Caravelle 217 Bowrider continues along that vein. She even goes a step further, because the 217 can also handle a bit of offshore fun thanks to her cleverly designed hull.

XP… what‘
The 217 is built around Caravelle’s XPV (eXtended running surface, Pad bottom, and deep-Vee) hull design. The extended running surfaces help the boat to plane extremely quickly, remain stable and flat in turns and minimise “bow rise” on take off. And because the hull extends past the sterndrive leg on both sides, if the boat flies off a swell when running off the coast, the weight of the rear-mounted motor brings her down on the transom. The extensions hit first and force the bow down, so the sharp bow and deep-vee keel slice through the next wave cleanly, softening the ride.
This hull has a deadrise of 21 degrees and extremely aggressive chines that she carries well forward. These improve the 217’s ride in two ways. When the boat is planing, air is trapped between the keel and the outer edges of the chines, which cushion the ride. And unlike a boat with a heavily-flared bow that throws water up and away from the boat (wind can blow some of this water back on board under certain conditions), the water peels down and away from a point just in front of the windscreen. The result is a soft, dry ride.

The ‘P’ in XPV is for ‘pad bottom’. Instead of having a traditional-vee keel at the transom, this boat has a ‘delta flat’. This helps it plane quicker, increases top-end speed and stops the transom digging in, similar to a ski boat. And while this will slightly reduce wake heights at slow speeds, she still ‘walls up’ enough water for beginners and intermediate wakeboarders. With the wake tower option fitted, this boat’s destined to become a top, all-round, fun vehicle for all bowrider.

But there’s another factor in her build quality that gives the 217 even more credibility and longevity: there’s no wood used anywhere in her construction'”no wood, no rot” as the Caravelle slogan states.

Performance & handling
The conditions on the day of this test were ideal’ideal for watersports that is, but not boat testing’it was as smooth as a politician at election time. But by jumping wakes and throwing the boat around in a series of fast, tight turns, I was able to ascertain her potential. Unfortunately, it wasn’t her full potential, because as this was the first Caravelle 217 into Oz she was still in ‘trial mode’ and running a big 21in three-blade Vengeance prop.

The prop might give this 21-footer a top speed of 45 knots, but it reduces her ‘hole shot’ and ‘time to plane’ and does allow some cavitation in tight turns. It was no big deal, but by fitting an 18in four-blade prop she’ll rocket onto the plane like her award-winning sister model the 196, albeit with the loss of a couple of knots off the top end. Who drives around flat out all of the time anyway’

Still on performance, the hull has two strakes on each side of the keel. These are set at 90 degrees to the hull and extend two thirds of the way along the length of the hull, so the 217 tracks dead straight and snaps back to straight running after a tight turn.

Clever layout
The layout of the 217 is typical of all good American bowriders, but her 2.59m beam gives more usable interior space and a larger bowrider cockpit than you expect in a 21-footer. Like the rest of the boat, this area features quality, heavy-duty marine vinyl, infill cushions and grab rails where you can reach them. There’s plenty of under-cushion storage, two pop-up bow cleats and even a dedicated anchor locker!

But it doesn’t stop there. Positioned at the top of the anchor locker is a handy bow ladder, which is great for off-loading at a beach. There’s also a wrap-around windscreen that’s set at the right height, so you can see over it when using the bolster seat, or through the screen when fully seated.

Directly under the split screen opening is a massive ski locker. It’s that big an adult could lie in it, so I doubt you’ll have any trouble storing skis and wakeboards here. But there was one obvious exclusion; especially at this time of year, a method (read removable door/panel) to seal off the bow cockpit from the main cockpit. Seated in the middle of the rear lounge while under way I was copping 40 knots of breeze up my kilt.

The adjustable driver’s seat makes it easy to obtain an ideal driving position, while the 271 features full instrumentation, all of which were clearly visible while driving. The navigator/observer’s seat is also fully adjustable and swivels so you can watch a rider behind the boat.

There’s a wrap-around transom lounge, with extra storage and a dedicated rubbish bin under the cushions, clip-in carpets, a fully-integrated, moulded and extra large swim platform with boarding ladder, but the piece de resistance is the transom walk-through. Under the step is a portable Esky and it has a padded gate that lifts to 45 degree and makes a headrest for the sun bed on top of the engine bay.

The wrap
This imported bowrider gets a tick in all the right boxes and would make any boating family happy. Her performance and handling are extremely good, so good that this boat will handle sensible offshore running. So a run from Sydney Harbour up to the Hawkesbury River or similar’is feasible. She’ll slice through that afternoon chop on Moreton Bay with ease.

I also think this 21-footer’s price tag of $75,990 is pretty good value for money, especially when you consider her engine upgrade, options like bow lights, top-of-the-line stereo and a fully-rollered Dunbier trailer with electronic brakes. If you’re in the market for a classy Harbour blaster the Caravelle 217 is well worth a closer inspection.