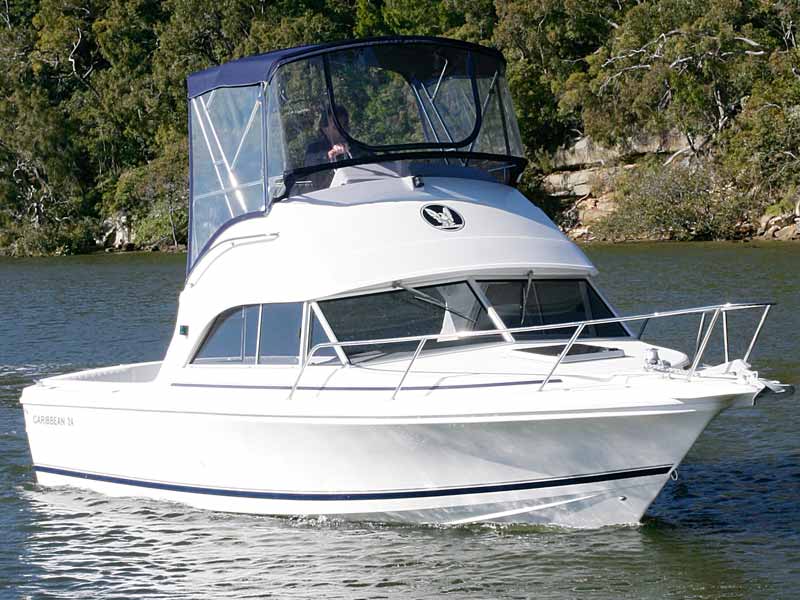 Are you in the market for a new flybridge cruiser? What would you say if I said you could now get behind the wheel of a true-blue Aussie sportfisher for under $105,000? B#^& S#%*! But it’s true. And if you’re prepared to push the bank manager for $110,000 all up, you could become the proud owner of a full-blown, offshore sportfishing battlewagon.
Sylvania Marina, Caribbean’s Sydney-based distributors, have given its 24ft Flybridge Cruiser a new lease on life and come up with a solid, albeit basic, flybridge vessel with a starting price of only $104,000. But spend an extra $6000 and you’ll get all the sportfishing extras (rocket launcher, outriggers, live-bait tank, berley bucket, GPS/Chartplotter, VHF radio, etc. etc.) to get you and your mates out where the big ones lurk. It’s the best value sportfishing package I’ve come across in years.

Don’t scoff
Many boating correspondents often scoff at Caribbean boats saying that it hasn’t modified its hulls in years, so they can’t possibly be as good as the new generation hulls on the market today. But I disagree. The ‘if it ain’t broke don’t fix it’ principle certainly comes into play here. This 24 footer displays all the excellent sea-keeping characteristics of many much larger craft.

And this ‘is’ a new hull. Caribbean didn’t just stretch its existing 23ft hull, or take the 24ft hull and simply add a flybridge, it created a new hull for the job that retains the same design principles as the other hulls in the Caribbean line-up. In fact, its on-water performance is almost identical to that of Caribbean’s 26ft Flybridge.

The chines on this boat aren’t as aggressive as some of the newer hulls around, so Caribbean opted for a moderate-vee (to ensure the flybridge doesn’t over balance the hull), a sharp bow entry and a pronounced bow flare that produces a top rough-water ride.

Base boat
The 2400 FBSF base boat is powered by a 5lt V8 MPI MerCruiser sterndrive, which gives the boat a top speed of around 30 knots. It features an upper and lower helm station, windscreen wipers, bimini, flybridge clears, storm covers, dual batteries, anchor winch, automatic bilge pump, clip-in carpets, freshwater transom shower, two-burner stove, sink unit and a Porta Loo, but still only retails for $104,000. In my book that’s exceptional value for money, even before we add the optional extras required to create a top offshore fishing boat.

Yes, the test boat’s interior finish was a bit agricultural, but it’s functional, easy to keep clean and in 10 years time it will look as tidy as it does now. But note I said, ‘test boat’. Within a week this boat will be completely refitted with teak decking and inlays, all the required sportfishing paraphernalia and a Furuno colour sounder/GPS with a lower station repeater – all for just $110,000. I challenge any reader to come up with a better sportfishing package for that kind of money.

With an overall length of 7.2m (plus swim platform and bowsprit) and a beam of 2.69m, a permit is all that’s required to tow this boat with a large 4WD. But you will need to mount the boat on a dual-axle trailer with electronic brakes and this will add around $16,000 to the purchase price.

Interior layout
This boat has an aft cockpit of 4.5m sq, which is an added bonus for we fishos and makes her an ideal fishing platform for four anglers.

The main cabin has a vee-berth with an in-fill cushion – so two burly fishos can curl up here to spend the night out on the ‘grounds’. The U-shaped dinette on the portside coverts into another bunk for the third angler, while the fourth fisho can sprawl out on a Li Lo in the cockpit under the storm covers.

There’s a galley on the starboard side behind the skipper’s seat, so breakfast isn’t a problem and there’s plenty of under-bunk storage in the cabin, under the dinette and in the deep side pockets.

The gunwales had good ‘toes in under’ access, so anglers can brace themselves when fighting a big fish, but this wasn’t the case at the transom. The engine box doesn’t encroach into the cockpit too much, but the battery cover panels, on either side of the engine box, go all the way to the floor.

You can’t get your toes under at the transom when fishing. It’s only a minor point, that’s easily fixed in a couple of minutes with a rip saw, a job that’s already been charted for the boat’s upgrade.

Solid performer
Out on the water the 2400 FBSF sliced through chop and swell easily, without too much banging and crashing – the extra fibreglass hand-laid into the hull reduces running noise considerably. Engine noise up on the flybridge was negligible and even at the lower station you didn’t have to yell to hold a normal conversation.

Throwing the boat into tight turns at full noise, something you normally wouldn’t need to do offshore, didn’t phase the boat and a stiff breeze quartering onto the bow didn’t blow her lateral trim. Even so, I’d fit trim tabs even if I weren’t doing the full sportfishing fit-out. (These are included in the $110,000 price tag).

With her 300lt fuel capacity, the 2400 FBSF has a cruising range of around 250 nautical miles. Split the fuel bill four ways between anglers and that’s a full day’s fishing for just over $100 a head. You can’t even get a six-hour inshore charter for that kind of money.

As I said earlier, her top speed was 30 knots, but she’ll cruise all day around 20-25 knots. But drop back to a 7-knot troll speed and her range increases dramatically.

If I were in the market for a value for money flybridge sportfishing platform, I’d be taking a serious look at this new Caribbean 2400 FBSF.