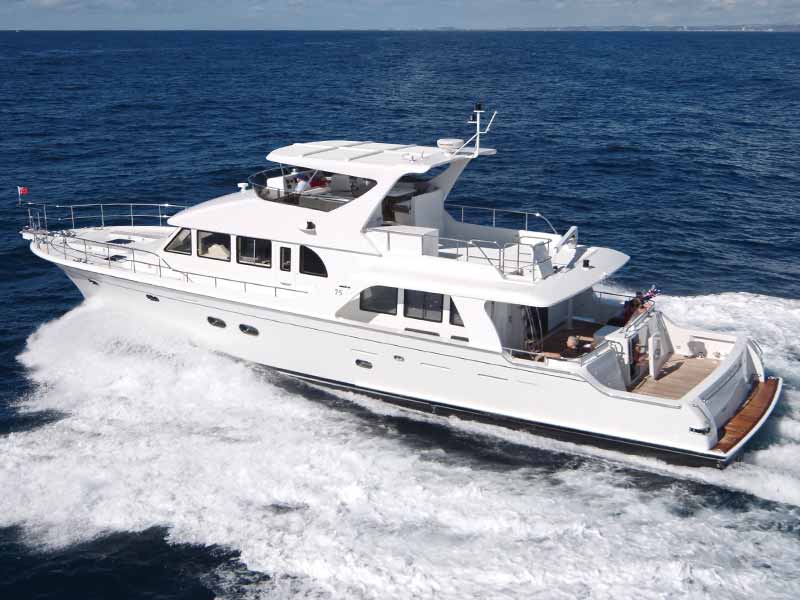 You may remember ‘Cheoy Lee’ – a name missing from the Australian market for some time – as belonging to the beautifully finished sailing yachts that came to Australia more than 20 years ago. What is not so well known is that Cheoy Lee has been around for 135 years and now builds a range of small ships, from oil rig tenders to ocean going tugs and patrol boats, as well as a range of luxury motor and mega yachts up to 52m.

The 75 is one of a new generation of Cheoy Lee luxury yachts from the Bahama Pilothouse series, but it’s been reconfigured for the Australian market and called, more appropriately, the Daydream.

Adrian Alle, who heads Cheoy Lee Yachts in Australia, went to the Hong Kong factory to commission a Daydream 75-C and was handed a 38-page document of fitout items to fill out. Such is the attention to detail that the list includes all fittings, right down to the bathroom taps and lights. Thus, the vessel was custom built to Adrian’s specific wants. It’s a big job and, as Adrian says, it pays to employ a specialist yacht interior designer. He choose to ask Versace interior designers to help out, given that their office faces his at Main Beach on the Gold Coast.

A-MAZE-ING DAYDREAM
The Daydream is a small ship. Backed into the dock at Sanctuary Cove, it looks overwhelmingly huge, particularly at the close of the Sanctuary Cove International Boat Show, when getting out of the marina can be a bit of a nightmare – tight pontoons and boats every which way. But it proves no problem for the Daydream. With the twin Caterpillar C18 1000hp engines (that’s right, only 1000hp, not the 1500hp you’d expect on a 75-footer) in idle and just using the control lever, it slides easily out of the berth and through the maze. There is no need to switch on the bowthruster.

Indeed, there is no need for Adrian to use the wheel. He just plays with the electronic control lever and the big boat responds.

LAYOUT
Step aboard through the rear transom door into a cockpit that has enough room to cast out a couple of light tackle rods. From there, a watertight door leads to the engine room, through which you can make your way to the crew quarters. You could effectively handle the vessel with one other person who knows what he’s doing, if you’re an experienced owner. But if you’re new to boating, it would pay to have a skipper and a deckie, at least until you get used to the ‘small ship’ systems that the Daydream employs.

Up from the cockpit is a mezzanine with a couple of lounges for people who want to sit out the back, and entry side doors for when the vessel is alongside a pontoon – bring your own steps, though. Side doors also lead onto the side decks, where it is an easy walk up to the bow.

Enter the main cabin through a solid, stainless steel-framed door, and your first word will be “Wow!” A light mahogany sideboard accented with cherrywood-like Sapelle and topped with black granite, features all the way down the port side. In the middle is a glass-fronted bar which shows off glasses, crystal (of course!) and a selection of top shelf wines and spirits. A couple of hand-painted wall-mounted lights with porcelain shades sets it all off.

A small sink is tucked away aft and there is a place forward in the bulkhead for a coffee maker and the Bose N38 surround system. The advantage of an owner being able to pick his own appliances is that they can be sourced in Australia – for shipping to the Hong Kong factory for fitting – and so will be suited to Australian conditions, with any warranty claims that may arise handled locally.

Opposite is a lounge, with a dining table that is Adrian’s pride and joy. He worked the design, which includes three different inlaid timbers. It’s a real talking point, as is the seascape painting on the bulkhead. The carpet is unusual too; it’s red with a gold fleur-de-lis pattern.

The other thing that stands out is the cabinetry, bearing stylistic curves, throughout the boat. There is a trick to this. Cheoy Lee pioneered foam and light weight composites and has used the technology to form the curves and then finish them off with a timber veneer. This also keeps the weight down, and in a boat this size, that’s important. Indeed, the Daydream displaces 48 tonnes – about 12 tonnes less than a vessel of similar size – and so needs only 1000hp engines to power the craft, instead of the customary (and more expensive) 1500hp variety.

Situated behind the pilothouse, up some steps, is a galley that would rival a full size kitchen in a Gold Coast apartment. The workspace again features the impressive granite top. There’s a blender set into the work bench, plus an oven with a four-burner top, dishwasher, full size upright fridge and freezer and a microwave set in an overhead cabinet – which needs about 50mm off the bottom because I kept banging my head on it! There is also a dinette next to the galley. Again, all the appliances were sourced locally.

The pilothouse helm station is set in a leather-trimmed console with a burl insert and a real compass on top. Along with the normal Cat readouts, a Raymarine electronic package offers a radar monitor, E120 plotter tridata readout, autopilot and VHF and HF radios. Stabilisers also have been fitted.

The area is finished off with an old fashioned wooden steering wheel and a very comfortable leather helm chair. I only get to sit in it when Adrian is upstairs, driving.

There’s still a lot to see from here, and we have a choice: down a set of curved, carpeted stairs, to the accommodation, or up another set of internal stairs to the flybridge.

VERY ACCOMMODATING
The centerpiece of the impressive master cabin is an island double bed behind which are mirrors that make the cabin look large. On one side are a writing desk and a vanity with a stool. The cabin also comes with a walk-in cedar-lined dressing room and another walk-in hanging locker, as well as a bench seat.

The bathroom lives up to its name, big enough to house a bath at one end as well as a full-size shower cubicle at the other with a ‘his ‘n’ hers’ basin and mirror.

Guests get a big cabin with a bathroom as well, and the third cabin has a couple of single bunks and its own head.
Upstairs on the flybridge is where you’d spend most of your time. The hardtop covers another entertainment area. Up here the driver gets a similar chair to the one at the lower helm station, only it comes in white leather. There is another one for a companion, as well as the usual lounge and table and a bench seat up front with the driver.

At the back is a big balcony that covers the mezzanine. The dinghy can be lifted with a crane and stored here, but there is still enough room for a wet bar, barbecue grill, fridge and a few deckchairs for guests. And the more I look the more things I find, such as two fold down full-length deck chairs on the bow instead of a sunpad, a washer/dryer hidden in a cupboard in the accommodation companionway and small rechargeable torches in each cabin – just in case you have to get up in the middle of the night and don’t want to wake your partner.

TWO HULLS IN ONE
The hull of the Daydream is virtually two hulls in one. At 10-12 knots it behaves like a displacement hull, but up the revs and it becomes a planing hull with a top speed of 24 knots. The engines are well forward with short shafts in semi tunnels, swinging five-blade 36×30 props

I can’t find the trim tab buttons on the dash. That’s because there aren’t any. The hull extends all the way back to the end of the boarding platform to lift the stern at speed, so trim tabs aren’t required.

Cheoy Lee also builds its motoryachts with double hulls, housing the fuel and water tanks between them in order to keep the weight low in the boat. The 8000lt of fuel is contained in four separate tanks for balance and this would get the boat, cruising at 18 knots, from the Gold Coast to Sydney in one hop with fuel to spare.

The surprisingly quiet Daydream has an easy sea motion, turning easily at 18 knots, although the steering is low geared and needs a few turns of the wheel to get the boat around.

The view from the flybridge is good forward, but there is very little vision out the back because of the rubber inflatable and the crane. Even from the pilothouse, with the side doors open, the view is restricted, so a remote that can be operated from the aft cockpit is supplied. This makes docking a lot easier, but, being a big boat, a couple of people are still required to take up the lines on the dock. If the boat catches the wind and gets too heavy to haul in, electric winches have been provided at the aft fairleads to take up the tension.