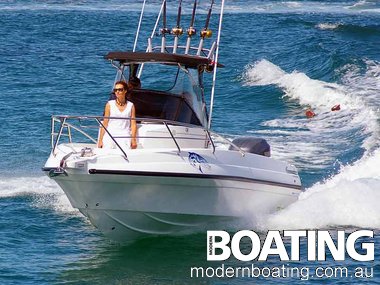 Western Australia’s Commodore Marine range has only two basic moulds, but within those parameters, Commodore certainly rings the changes. The latest variant is the Couta 685 Centre Cabin that shows the thoughtful detail Commodore typically puts into its designs.

At 6.7m, the Couta’s hull is the same as that of the 670 All-Rounder, a boat with quite a rough water reputation. It’s not immediately obvious why the hull works so well. The bow entry is pretty fine with some solid shoulders above, and the deadrise flattens out from 33 to 22 degrees at the transom. To remove some buoyancy and aid stability at rest, Commodore did not go the route of a planing plank. Instead, the keel is distinctly rounded, which helps soften landings with the boat heeled.

Whatever, somebody got the balance dead right and the ride is even better in the Couta than the 670. The cab is set well back, which places the driving position further behind the slam zone.

The Couta’s walk-around format is an enlarged centre console that leaves plenty of room to move. All around the boat’s perimeter, toe room has been left in the bulwarks for fishing comfort anywhere on board.

And fish very securely too. In contrast to most of the imported centre cabs and consoles, the Commodore has almost extravagantly high coamings reaching almost to the base of the spine in the after cockpit. The deck is higher forward, but heavy-duty guardrails take up the safety load?the 32mm diameter instead of the usual 25 gives you some confidence. And the guardrails fit inside the boat’s footprint, so they are not de facto fenders.

NO TIMBER
The Couta’s structure uses no timber. Commodore chose to use Nidaplast for the deck. This is a synthetic honeycomb board 25mm thick that has tremendous rigidity without weight.

Her beam is 2.4m and all of this is needed to fit in the walk-around side decks and still leave room for a cabin. The cabin is something of a Tardis, with a lot more space inside than you would guess from the jetty. Not a lot of width, but enough for sitting or to use the electric toilet. Her length, meanwhile, is remarkable, allowing a couple of basketball players to sleep down there.

The door is fabric, the only practical option for the available space, although it is often the best option anywhere if you like an absence of rattles.

The limited space between the extended cabin sides inevitably has the two swivel seats close to each other, although it is no great struggle to get between them to the door. The instant fix for space is to remove the seats, pedestals and all, which is a simple but unusual idea of Commodore’s. Divers particularly, with their generally shorter trips and greater need for elbowroom will like this.

The cushion of the rear lounge has been given hinges, allowing the choice of folding or removal. Stripping out the seating has a big visual impact and effectively turns the Couta into a workboat.

The one permanent seat is moulded into the forward extension of the cabin. Usually a magnet for children, during the photo session it was taken over by the best-looking person on board, who found it extremely comfortable.

POWER ON
Electrics have been given the attention they deserve. The cranking battery and deep-cycle house battery run on a system that quarantines them and gives charging priority to the starter, but allows paralleling for emergency starts.
Lighting power demands should be negligible as Hella LEDs account for all lighting fixtures, including spotlights. A Lewmar power windlass periodically bolsters the demand and it, like everything else that would normally use a fuse, is protected by circuit breaker.

The Couta as reviewed is a standard product. The builders did their research and found that Commodore buyers generally went for a full set of options, and it was simpler and cheaper?for builder and buyer?to include everything in the price. And they have not skimped on the quality of what is standard. The anchor cable, for instance, has 10m of chain and 100m of 12mm nylon?a far cry from the bad old days of 45m of ‘polyprop’.

The bimini is also special. It covers a sizeable area, with forward and aft extensions, and it is made of heavyweight, genuine high UV-resistant canvas?not plastic-backed fabric.

Mainly dedicated fishos buy centre cabs. A lot of them would probably have bought centre consoles instead if their wives had not insisted on toilets, although they soon appreciate the benefits of extra protection. They do, though, want to see the fishing essentials built in, and Commodore does not disappoint.

Rocket launcher, coaming sockets and bulwark racks accommodate 14 rods. When casual fishermen like myself ask if a boat that will fish maybe three or four anglers really needs so many, we get the bent eye and the “of course it does”, so I accept that the Couta has barely enough. Although not fitted to the review boat, outriggers are near certain to become standard fittings.

Cleverly, the sockets for the bait board are duplicated at the transom and right forward, so you could carry two, or fight over which end got the one. Or?and I think I am onto something here you could use one for the barbecue to appeal to second-class anglers.

There is a live bait tank, and an associated deck wash and shower, and an under-deck kill tank nice at more than 1.4m long and 300L.

The driving experience is as pleasant as the appearance suggests it should be. The driving position faces a dash that says drive-me, and is in a nice relationship with the main controls. The steering is hydraulic and its fingertip qualities encouraged us to throw the Couta around.

PERFORMANCE
The Couta laid into hard turns less than the average boat, probably a function of its rounded keel and a reassuring sensation to more nervous boaters. No adverse reaction came from the propeller, which hung on notably hard. We spent quite a chunk of the on-water time getting the right match of propeller with the 200hp Yamaha four-stroke.

Our final choice saw 38 knots at 6000rpm with a full load of six people and 200L of fuel. A respectable result, and very near the top end for this hull (rated up to 225hp).

We used a lot of the speed in the fairly mild conditions and found the boat not just suited to the typical Western Australian driving habits. Sandgropers generally drive downhill most of the time, heading out to sea on an easterly, and coming back with the sea breeze. Their plate aluminium boats work well in those conditions, but the Couta was more versatile.

Courtesy of the wakes of passing cray boats, we assessed head sea performance as considerably good, and running with the same wakes and whatever nature gave us still provided hands-off straight tracking.

All up, a good overall performance from a well-priced boat. The as-tested price, sitting on an electric-braked trailer, was $88,990 from the WA factory door. Delivery to the east coast adds $2500, making it still a modest proposition for what is essentially a custom boat.