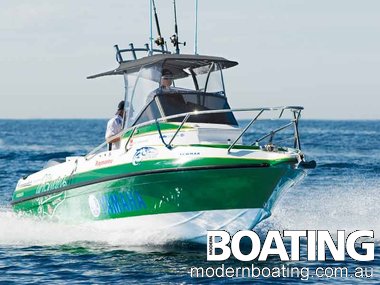 Startling tales of shipwreck and bad weather couldn’t keep Danny Green and his Green Machine from going toe-to-toe with the Abrolhos.

Recently a boutique West Australian boat manufacturer had the inspired idea of taking a handful of their customers, including boxer Danny Green, on a live-aboard fishing odyssey to the Abrolhos Islands.

Perth based boat builder, Commodore Marine, has forged a formidable reputation for sea handling boats with a range of ‘glass hulls from 5.7-8m in length. The most popular hull, the 670 or 685, is available in three top-deck configurations a classic centre console, a true ‘walkaround’ and a full cabin version.

Champion boxer and local Perth boy, Danny ‘Green Machine’ Green asked Commodore Marine to customise his Couta 685 Green Machine, and the result is an impressive trailerable rig. Danny and his Green Machine joined the nine-boat flotilla from Geraldton to the Abrolhos group, some 60km west.

After a six-hour drive from Perth to Geraldton, towing nine boats, the group were ready for a live-aboard adventure, island hopping throughout the Abrolhos. Crews needed to make plans for fuel, water, food, drinks, bedding and fishing equipment as there are no supplies available on the islands?apart from a seemingly endless stock of fresh lobster!

The secret Abrolhos
The Abrolhos group of islands is one of the west coast’s best-kept fishing secrets. You’re not allowed to just ‘rock up’ to the Abrolhos Islands, there’s simply nowhere to stay. We all went as guests of the local fisheries department who escorted us from Geraldton and throughout most of our stay in an effort to educate us about the fragility of the area and its unique attributes.

This diverse fishery is home to a blend of temperate and tropical fish species that range from snapper, tailor and samson fish to mackerel, sailfish and coral trout. This mix makes it a special location for divers and anglers.
We slept in the local fisheries lodging facility, which was ideally placed on Rat Island, a perfect base to some outstanding fishing grounds, dive sites and geographical sites.

The nine boat loads of adventurers had several goals when they set off. Firstly, to explore one of Australia’s most beautiful, diverse and pristine marine environments. An afternoon dive on the marine park grounds of Anemone Lump presented unbelievable fish life. An abundance of large nor’-west snapper (spangled emperors) and baldchin gropers were extremely friendly towards the swimmers. I marvelled as coral trout ducked into hideaways in the rugged bottom then torpedoed towards the surface for a piece of bread! There are countless top class dive sites around the Abrolhos, and this one certainly rivalled many of Australia’s best.

A light plane flight over the entire region demonstrated the expanse of shallow reefs and coral. An endless array of bommies, sand cays and coral holes filtered the turquoise waters. Only the bright pastels of the cray fishermen’s huts on the many island groups interrupted the collage of blues and greens.

Also scheduled was a visit to the local school for a fundraising auction and barbecue. This proved a huge success. Danny’s efforts contributed three-quarters of the money needed to re-roof the school, a project they had been working towards for the past 18 months.

Fish finding mission
Danny loves his fishing, and the group’s efforts concentrated mostly on either trolling for Spanish mackerel or bottom fishing the countless lumps around the islands. The mackerel were in good supply. We identified some lumps on the chart and trolled over them with a pair of bibbed lures with success. These high-octane predators gave us sizzling runs and averaged around 10kg.

The bottom fishing also lived up to its reputation with awesome stocks of coral trout that appeared to have never seen a soft plastic lure. Westralian dhufish added to the list of fine table species. Every corner of reef seemed to hold great stocks of fish for the bait fishers and soft plastic lure enthusiasts alike. Catching a fresh seafood dinner was not a problem!

Danny’s compact Couta 685 showed plenty of thought had to gone into storage to accommodate fishing space. Another advantage of these boats was the impressive speeds, which aided in covering a lot of ground. And there is plenty of it to cover in the Abrolhos Islands!

Our four-day trip rushed by, as we moved around, exploring one area, then another. Yet we only scraped the tip of the reef in relation to how much great cruising, diving and fishing is really on offer here.

This brief glimpse was a revelation about what the Abrolhos Islands have to offer the sailing, fishing or diving enthusiast. I’ve heard that an Abrolhos adventure can include nasty weather and that heaven can easily be hell, but for me, and until next time, it’s heaven!

The hull shape at the transom is a convex half-circle with an approximate 22 degrees of deadrise. This shifts into a sharper 33 degrees closer to the bow for enhanced chop-handling ability.

Often, you’ll see a boat’s hull with either a deep-vee with a sharp keel line or a flat running or planing plank in the centre both of these options have their advantages and disadvantages. But the Couta’s convex shape is something completely different. The most obvious advantage is when underway with the sea behind and to one side. With a vee-hull design, the tendency here as the boat steers down the wave is for the hull to lurch down into the hole of the ocean, as one side of the vee follows the shape of the wave.

With the convex hull shape, this does not happen. Instead, there is always a flat surface parallel to the wave because of this true, variable deadrise approach.

The addition of a series of running strakes and reversed chines gives the hull solid tracking and stability at rest.

WEATHER PROOF
The Couta 685 has a big reputation in the West for its ability to handle the worst the weather Gods can dish out and its build quality and construction strength are further testament to that.

This boat is a timber-free zone. The floor is made of 25mm Nidaplast, a synthetic ‘honeycomb’ deck that adds tremendous strength without adding weight. The remaining under floor is filled with positive foam flotation so these boats are not only built to last but literally can’t be sunk.

Danny’s Green Machine is a centre cab or ‘walkaround’ design. What’s nice about this boat is that the ‘walkaround’ is full height and wide enough to actually walk around. Now there’s a novel idea! It achieves a real space both along either side of the cab and in front.

Normally, the result of such a generous walk is a compromised cab. But in the case of the Couta, there are two full-length bunks that could sleep Basil Fawlty at full stretch (or a couple of Manuels?). The width isn’t huge?enough room to sit and use the toilet but at least the bunks are serious.