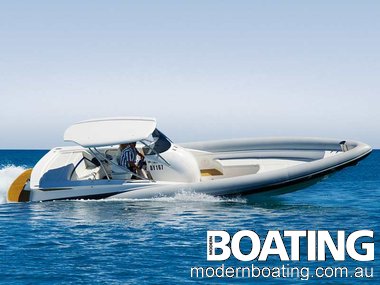 This RIB’s size, speed and style raises the bar.

If your mental picture of rigid inflatables (RIBs) is strongly influenced by surf rescue duckies and Special Forces assault boats, be prepared for something different with the boats from Cougar Marine. ‘Utilitarian’ is definitely not the key adjective here.

Importers Eagle Yachts expect Cougars to appeal to people who want to get places quickly, in comfort and style. The RIBs make natural tenders for Eagle Yachts’ major imports, Bertrams, but they stand alone fine as well. If your lunch appointment is 20 miles away in 25 minutes time, you will be glad you have the keys to one of these. On the way you will have the pleasure of envious and admiring eyes looking at an extremely attractive boat.

While we were reviewing the biggest Cougar, the R11, we had the smallest, the R8, as camera boat. Naturally, I took the opportunity to play with both and, unsurprisingly, found more similarities than differences.

The design originates in Britain, which has been an enthusiastic country for RIBs for many years. The Cougars that will be appearing in increasing numbers in Australia, though, are built in New Zealand under licence. Unusually for boat building anywhere these days, the home factory can’t keep up with European demand, and New Zealand-built Cougars are now being exported to Britain.

Interestingly, despite their origins, the two Cougars I played with had at least one feature typical of NZ RIBs: a high-set buoyant collar. I got the first evidence of this when I stepped onto the collar of the R11 to board it and caused a list. It was nothing huge or worrying, but more than you would get on, say, a Naiad.

The other indicator was when simply driving alongside another Cougar and seeing the entire length of collar out of the water. This obviously does wonders for drag removal, and is no doubt one of the reasons for the Cougar’s very good conversion of power to speed. And, while on the subject of collars, the Cougars are tapered fore and aft: unusual, attractive and, who knows, perhaps aerodynamic.

The R11’s hull has a balsa core, sandwiched between aramid hybrid-E-glass laminations using vinylester resin. Sophisticated stuff, and the hull shape itself is sophisticated, too. Deadrise is a sharp 24?, and the bottom has two steps in it to aerate the water flow aft of the steps and reduce drag. The Cougar hull is the direct descendant of a racing family, and the steps were put in at least as much to influence trim and inhibit hobby horsing as to improve performance.

Considering the R11 is trailerable by the likes of a Land Cruiser (so long as you have the over-width permit), it is a very big boat: 10.7m overall with a 2.95m beam. That’s gross beam, of course, with the collar consuming a fair chunk of it. But think of the advantages you get with it. A narrow deep-V hull is just what you want for economic speed in rough conditions, and you have the collar doing the job of trainer wheels?making up for the stability lost by the extreme hull shape.

UNDERWAY
Unlike most other RIBs where the GRP or aluminium component of the structure is pretty much hidden by the collar, from the console aft the R11’s moulded sides rise above the collar to make a completely solid cockpit. You can sprawl on the rear lounge with an arm on the rail, looking very cool indeed.

Or you can feel cool in one of the pair of matched bucket seat-bolsters at the console. Literally cool, because at speed the air comes at you from everywhere: raise your arms and it will suck the shirt off you.

All the power options for the R11 are sterndrive, ranging from single diesel of up to 400hp, to twin petrol and 900hp. The test boat had the more-or-less standard twin MerCruiser 350s; with a claimed top speed of 56 knots from them, you would need a really good reason to go the extra 200hp.

But we had the right day for 900hp, and a poor day for assessing an offshore rough water hull. On the rippled side of flat, it gave the kind of ride you dream about. We hunted out the wakes of ferries to give the hull some sort of stress, but it just ate them up.

The top speed we achieved flickered between 50 and 52 knots. The boat having spent the previous two weeks in a pen with an unprotected bottom explained the missing handful. A snorkeller with a broom had done his best, but at blistering speeds like these anything less than perfection does nasty things to performance.

This style of boat has to be fun to drive or half the point of it has disappeared; plenty of air movement despite the windscreen was part of that. So was the acceleration real kick-in-the-back stuff. Although the boat is self-trimming to a large extent, playing with the trim button was still worthwhile, the tacho and driver’s ears revealing the load coming off the props.

There was sheer joy in giving handfuls of wheel to this big responsive boat at 50 knots. The high-set collar let the boat take on bigger angles of heel than the typical RIB, and it hung on like a barnacle in the tightest turns (although at rather less than full throttle). Wound on to give G-numbers like a centrifuge, there was not the slightest indication that the propellers or hull would ever let go.

The driver’s office is business-like and simple. Throttles mounted centrally mean left-handed operation; some people find this unnatural, but what hand do they use for their car’s gear lever? A Raymarine C120 plotter-sounder sits above the throttles, with stereo and VHF to its left and the SmartCraft screen and the switch panel to its right.

THE FITOUT
For what is basically an open boat, the R11 has a lot of luxury and tricky fittings. To convert the bolsters to seats when the speed drops, you press a button and let electricity do the rest. Electricity also lifts the rear lounge to expose the engine room, and powers the twin pumps that automatically top up the pressure in the collar’s seven air chambers.
The deck and swim platform were so obviously sheathed in teak that I could barely believe the news that it was actually synthetic wood, Flexiteek. It has the great advantages, of course, of never producing splinters or absorbing spilt shiraz.

And with quantities of that consumed, another luxury item might come into play: the head. This is a beauty. Plenty of larger centre consoles have some form of toilet, but in most cases it helps to be an acrobat if you want to use it. This compartment is vast, containing head, washbasin and shower, and enough room to use them. It also houses the Cougar’s circuit breaker panel, which shows faith in its water-resistant properties.

One of the advantages of sterndrives is that most builders feel obliged to put some sort of protective platform over the legs. In the R11’s case, this too is decked with Flexiteek. It’s also extra large and makes a good intermediate stage between water and boat for divers. It’s big enough to take a beanbag or deck chair for some relaxed fishing at anchor.

Stainless steel is nicely handled. The support frame for the hardtop, as well as being very strong?handy at 50 knots is attractive in its own right: sculptured is probably the word. Which might also apply to the coaming grab rails aft: these are oval in section, contrasting with the round section rails across the seat rears.

More utilitarian items include pop-up cleats, amidships for spring lines as well as aft, and a massive king post forward an unbreakable attachment if you ever need a tow. There is no bowsprit up there: the anchor (stainless, of course) lives in a hawse pipe below the collar. More of the metal protects the hull from the anchor. The windlass lives in a compartment beneath the forward lounge. It drives a large capacity drum, winding up chain and fibre rather than trusting to luck to stow it.

It is a lot of well-equipped boat and surprisingly light. For many people, it could replace a penned boat, with the R11 living instead on a trailer, hardstand or in a rack. There are very few boats of any size that are this much fun to drive.