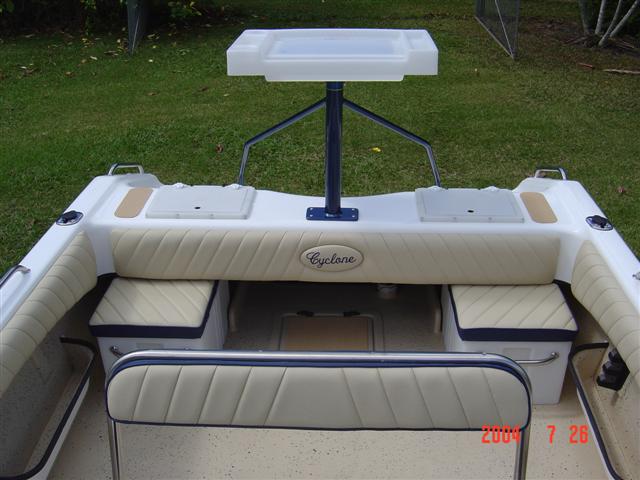 Sheltered by geographical isolation, Cyclone Boats do their own thing. They do it well and continue to grow. Cyclone mainly build ski racers. And in this ultra-competitive and fickle field they have established a lofty reputation.

So you can imagine the Modern Boating team’s interest when we heard about the company’s latest offering, the Cyclone 680 Centre Console – a full-on, hardcore fishing boat. It’s an extreme departure from the world championship ski racers it produces.

Boutique boat builders are usually individual characters and Ross is no exception. He’s a dedicated ski racer, but his surfer looks immediately give away another of his life long addictions. In fact, as we discuss this new boat with him there are times we feel as if we are discussing custom surfboard design instead of fishing boats. But Ross has a refreshing approach to a fishing boat’s on-water performance and it certainly shows.

The hull of this centre console has a 21-degree deadrise with an entry set well aft by the finely raked bow. It maintains a flat attitude at any speed as a result of a deliberate hook (concave curve) in the hull’s bottom.

As expected the 680 handles like a performance ski boat more than a mundane blood and guts fishing pontoon. But after our brief time with the boat during the test, we couldn’t completely explore its full potential.

You see, Ross was demonstrating the boat to a prospective buyer during the photo shoot, so obviously the buyer got the longest run. Even so, Ross didn’t hold back, throwing the boat into plenty of gravity defying turns and high speed runs.

So while we didn’t have enough time to get a true feel for this boat, we were left wanting more after our casual encounter with the Cyclone 680 Centre Console. This boat’s performance really gets the adrenalin pumping. You can blow the socks off other boats heading out to far flung fishing grounds in this baby.

At rest, despite the steep deadrise angle, the Cyclone remains stable, unlike some other deep-vee hulls, which tend to list as people move about. But its biggest plus – in fishing boat terms – is its centre console. This gives anglers 360-degree access around the boat, which comes in handy when fighting a big fish.

This is compromised slightly in the bow where the finely tapered chines rise. They tuck the deck’s toe line inboard of the topsides, forcing you to lean your body over centre to gain leg support. But this isn’t to a degree we find overly disconcerting.

It’s worth pointing out that the Cyclone Boat Co is small enough to be flexible. All customer’s layout requirement can be met. After testing the boat one alteration we thought could be useful would be to raise the deck forward of the helm area. A raised foredeck would eliminate the need to lean over in the bow to brace against the gunwales while fishing.

But this also lowers the height of the topsides in the bow relative to the deck. Some readers may see this as a reduction of the boat’s freeboard. Others will agree with us that it will make casting from the bow easier. This will be a real benefit when presenting lures or flies to fish on the surface, or casting to structures. An added bonus may be that you can incorporate a long, slim, insulated-fish box centrally between the front of the console and the bow.

For a centre console the Cyclone has an amazing amount of storage space. In a 6.8m boat you might expect plenty of room for the inevitable bits and pieces a true fishing nut must carry, but Ross has taken storage way beyond that. Many of the boat’s accessories come from the Bermuda Fishing Essentials range. These include the helm seat, two slide-out storage bins, tucked away in the transom, and a hide-away swing-out live bait tank.

There are small bait wells with lids each side of the transom and a bait cutting board that slots into two rod holders. This can be moved about the cockpit and foredeck area as required. There are also bait bins that can be hung in the bow.

There’s a tackle box built into the transom, an underfloor ice/fish box in the cockpit, more dry storage under the seat in front of the console and a 25lt icebox tucked away inside the console. Anyone who has ever tried to keep the sangers out of the slime in the fish box will appreciate the reasoning behind this separate food storage space. The transom storage bins have padded lids that double as seats if needed.

And, as you can see in the pics, Ross’ partner Chris invoked the lady’s privilege on the day and took over the comfortable seat in front of the console.

By centre console standards this boat’s console is huge. More than big enough for a couple to hide behind in rough weather. But this extra size also leaves minimal room to pass down each side of the console. For a slim framed person this is more than adequate, but a heavily set owner may have to opt for a bit of customising here.

The starboard side of the console sweeps back past the seat blocking any movement from the helm in this direction. This may take a bit of getting used to, but that’s probably the worst of it. Of course again you can always have a bit of customising done during the boat’s construction if it bothers you.

The stainless steel framed-shade top on the test boat did its job well. This will be considered an essential by most owners in today’s skin cancer conscious world.

The one thing we didn’t like about the console was the position of the steering wheel. Helm ergonomics are important in any boat if the skipper has to spend extended periods at the helm. The Modern Boating team would have preferred the wheel higher with a flatter angle than the vertical position in the test boat.

When we mentioned this to Ross he was surprised, because he preferred the helm the way he’d set it up. Obviously a personal preference that can be easily resolved if the customer wishes during the fit-up stage.

The standard of workmanship applied during this boat’s construction is obvious. Only top quality fixtures and fitting have been used with an attention to detail sufficient to satisfy the most pedantic eye.

Mercury’s 200hp OptiMax is one motor that challenges the benefits of four strokes, because of its low emissions and excellent fuel consumption. Hanging a 200hp OptiMax on the back of this Cyclone 680 put plenty of sting in the boat’s tail. Swinging a 21″ four-blade Mercury Trophy prop it really got out of the hole. Top speed was 46.2 knots.

Ross reckoned he could get a few more knots out of this combination with some fine tuning, but just to go fishing we considered that would be a bit excessive. As it was the performance of that big black motor was way beyond the needs of the average fishing enthusiast. A smaller 140 or 150hp should be ample. Indeed most of the boats Cyclone deliver are fitted with a 150hp outboard.