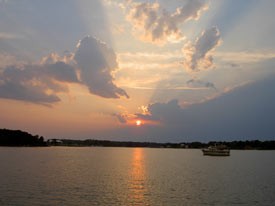 I’ve driven so many planing hulls during the past few months, testing their performances by running down the Gold Coast Broadwater at speed and out through the Seaway, I’ve done this so many times that I lost count. So it was a pleasure to step aboard a DeFever Heritage East 36 Sundeck motoryacht and take things a little easier.

Designer Arthur DeFever is a native of California who got his start in naval architecture at the end of WWII, designing commercial tuna clippers and retro-fitting them for cruising. All his designs have a distinctive profile with a swept sheer, high prow and a displacement hull form that gives them great sea-keeping qualities. Until recently, the vessels were built in Taiwan, but Art is in his 80s now and has retired.

All his designs and moulds have now been sold to a mainland China builder, which is continuing the DeFever cruising tradition.

The Heritage East 36 Sundeck is a classic trawler-style motor yacht that retains the lines and characteristics of the original DeFevers, which made the brand so popular with the cruising fraternity, especially in California.

The interior layout has been cleverly designed into the space limits of the hull, so well that the boat feels a lot bigger than a 36-footer.

The sundeck design allows for a very big aft owner’s cabin with a queen-size island bed that is just at the right height so you don’t need a ladder to climb into it.

The cabin layout is very stylish with long mirrors down each side that sit above chested draws and lockers. There are side tables either side of the bed with draws ‘ just like at home ‘ and a full-length, lined, hanging locker with an internal light. The en suite is big enough with oldfashioned wooden grates on the floor. If you want to bring the outside world in, there is a large hatch in the aft bulkhead ‘ just like a picture window ‘ and the whole lot can be closed off with a lockable sliding door.

A couple of guests can be accommodated up front in and off set, with a Pullman-style double bed; and shelves around the cabin, plus a full-length hanging locker as well. The day head is right next door.

While stainless steel (instead of teak) has been liberally used outside, the teak woodwork in the main cabin is first class. The workmanship in the joinery has to be seen it is all hand-sanded and is as smooth as…

While all the cabinetry in the main cabin is completed, the 36 is imported without any furnishings. I can imagine a new owner and his partner having a great time planning the decor for the cabin of their new boat. The large windows let a lot of light into the cabin and open the boat up to let air in, unless optional air conditioning is installed.

The storage on the Heritage East 36 is unbelievable, there are deep lockers everywhere, with DeFever not wasting a centimetre of space. He has been designing and building cruising boats for a long time and knows what people want in a longrange cruising boat.

Most of the driving will be done on the flybridge, but if you want to come inside on a not so nice day, there is a lower helm station. Between this and the forward cabin is the galley. Again, with more lockers and drawers than is normally found in a domestic kitchen. If there is room to put a couple of draws in or a locker for storage, DeFever has done it. The fridge is an upright with a freezer on top and the stove has a cover over the top to match the rest of the workbench.

One criticism of aft cabin sundeck cruisers is the steep ladder that has to be climbed up from the boarding platform. DeFever has thought of the more mature people who would be attracted to this craft, so instead of the ladder there is a set of steps leading up to the sundeck. Similarly, the steps down into the main cabin from the sundeck have a wooden banister and there are also steps up to the flybridge.

Thought has also been put into the side decks, at 400mm they are the widest I have seen on a boat of this type and with the 1m-high rails, walking up to the bow is safe and secure.

The flybridge will seat eight plus the driver and with an inflatable on top of the sundeck roof the all-round view is good. The Targa stands at 4.9m above the water line. Although it folds down, the boat would be pushing to get under some of the Gold Coast bridges. However, this boat is not meant for canal cruising, it belongs in the open sea.

Don’t expect to go places fast in this craft, that’s not the name of the game. Underway the motion is comfortable, almost lazy. The boat felt like it could easily put many sea miles under its keel.

The bow thruster takes care of any handling problems with the single engine.

Before the advent of bow thrusters people used to handle these craft with only one engine without any problems. Admittedly, a bow thruster makes life a lot easier, especially when maneouvring in a tight space or turning around in a channel.

The Heritage East 36 is powered by a single Cummins 6BT5.9M diesel with a shaft drive and four-bladed prop, and gets along at a very comfortable 9 knots at a lazy 2000rpm. The GPS recorded 8.4 knots, but that was into a 15-20 knots southerly out on the Broadwater.

The extra 600rpm left in the engine doesn’t add much to the speed, so the best cruising revs are at 2000 where the engine is using a miserly 15lt per hour.

At these revs the noise level in the cabin (remembering there were no furnishings on the boat) was a low 79.5dB and on the flybridge 68.9dB.

The DeFever 36 is ideal for a couple who just want to cruise off for three or four months of the year up to the reef or just spend weekends on the Broadwater or around Moreton Bay.

With a starting price of $425,000, it is cheaper than buying a holiday house. If you are not in a hurry to get anywhere it is a quiet, gentlemanly way to go. It certainly makes a change from pounding through the Seaway in a planing hull.

The new Heritage East 36 enters the motoryacht marketplace fulfilling the demand for high quality, efficiency, stability and value in a cruising trawler. Combining old world craftsmanship with modern technology and US-built components, the Heritage East reflects the ultimate expression of classic tradition and contemporary function. Bow to stern quality of materials is the most remarkable feature of the Heritage East. Generations of woodworking skills are demonstrated by ornate detailing of exotic hardwoods and highly varnished teak and holly sole.

The DeFever 38 was powered by a single Cummins, 220hp diesel engine with shaftdrive. A 270hp Cummins is an option, but it adds another $10,000 to the starting price.

The Heritage East 36 gets along at a very comfortable 9 knots at a lazy 2000rpm. The GPS recorded 8.4 knots, but that was into a 15-20 knots southerly out on the Broadwater.