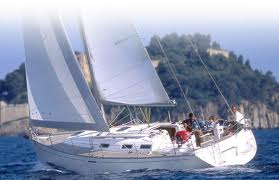 Two Boats In One

This classy cruiser still figures in the twilight sailing stakes.

When Dufour Marketing Director Paul Wuyts visited the Sydney Boat Show in July, he explained why being a product planner in the production yacht business can give you a headache. It’s because decisions have to be made that can result in serious damage to the fingernails.

When Dufour introduced its new line with 40-footer in 2003, (followed by the 44 and 34) the team used sophisticated moulding techniques to control weight. The hulls were vacuum-bagged and the decks injection-moulded (where the resin is injected between male and female moulds giving a good finish both sides) saving weight, volume and materials. It also gives control over the expelled gases, the sort of control the EC was talking about making compulsory.

Like all yacht builders, Dufour has had to confront a wave of cheaper yachts from opposition builders. They could have saved money by simplifying the construction, but instead chose, as did Beneteau, to create a new line of simpler boats. The Dufour 40, 44 and 34 are the fruits of this labour and are known as Performance Cruisers. And the boat you see here, the Dufour 385, is one of the new Grand Large series (which translates to mean Off shore, or the Big Blue, or something like that.

FELCI DESIGNED
For the new boats, the company again went to Umberto Felci (who designed the earlier boats). It was a logical choice as Umberto draws a good-looking hull. The 385 has more freeboard and a higher cabin profile than the Performance Cruisers, but she still looks good. Felci is not shy of using beam to generate internal volume; at first glance the 385 is wide and with quite a high displacement/length ratio.

A comparison with other newly-released Euro production boats reveals she is quite moderate in these dimensions; other boats of similar size are wider and heavier. Only a lowish sail area/displacement ratio reveals the Dufour 385’s cruising character.

The keel is iron and the standard auxiliary is a 28hp Volvo.

This boat has the 40hp option, with Saildrive and a fixed two-blade Volvo prop. The rig is a surprise, as the builders chose a two-spreader set-up with continuous diagonals, so rig tension can be adjusted at deck level. This is good race practice adapted to cruisers.

By that I mean it’s a good size, not too small, not too big, but at the point where small boats become big boats. Again, as Beneteau did, Felci has opted for two steering positions, but the Dufour has smallish wheels. On each console is a compass and immediately ahead of each wheel is a primary winch.

Because the wheels are small, the skipper can easily steer and sheet the headsail at the same time.

A drop-side teak table, with a stainless steel grab rail, is fixed on the cockpit centreline, but it’s easy to walk past.

The transom features Dufour’s unique transom seat, a full-width bench whose central panel folds down to form the boarding step.

The mainsheet traveller is forward of the main hatch and the sheet is controlled by a winch on the coachroof. All winches are by Harken; the headsail winches are No.44s.

The accommodation layout is modern classic. There’s three cabins (one in the bow, two in the stern) and two bathrooms, one en suite with the owner’s cab forward and the other aft on the portside.

With two cabins aft , the designer didn’t have a lot of choice but to put the galley amidships, on the portside. The big dinette is opposite and the centreline seating gives the cook something to brace against when the boat is on port tack.

Two other layouts are available as options. For both you lose the forward bathroom and the bed in the forward cabin is moved to the hull’s starboard side.

Aft, you can have two double cabins, or one double cabin to starboard, a big lazarette to port and a bigger and better bathroom. Both these latter arrangements also give more stowage in the bow.

The interior trim is timber up to the deckline; the overhead lining is moulded, with fabric inserts. The quality of the internal mouldings, particularly in the stern cabins, is high, with the material itself ‘soft ‘ to the touch.

SAILING
How does she sail ? All modern boats sail well, it’s only a matter of degree. We had only 5-8 knots, and for a short-canvassed boat with a fixed prop, she was responsive to the helm and to the gusts. The helm is firm (as two-wheel systems tend to be) but high-geared, so the response to wheel movement was immediate.

Some people prefer slower steering for off shore work, but I reckon when you need a quick response, close manoeuvring inshore, you need it fast.

I hate old-style slow gearing, particularly when you’re new to the boat and you spin the wheel half a turn, wait for the nose to react, then unwind by the amount you over-steered.

The 385’s helmsman can easily work the headsail winches from the wheel position. The 385 tracks pretty straight, so you can tack the headsail when beating, or when bearing away, ease the headsail then stroll forward and deal with the main.

The sails, in a cruising Dacron cloth, look pretty good. There was a time when a buyer would have been better off paying extra to delete the standard sails provided by most builders and order locally.

These days the standards are much higher. The Dufour sailmaker is Elvstrom Europe, but the logo looks a lot like the old and familiar Tasker boomerang.

The 40hp Volvo pushes the 385 quickly to hull speed and she manoeuvres well under power, both forward and in reverse. The engine controls and basic instruments are on the portside pedestal; the autopilot, if fitted, goes on the starboard side.

OVERALL
Who will buy this new Grand Large ? Pacific Yachting’s Glenn Coulton reckons it’s a cruiser that would be OK for twilight racing, but if you have higher racing aspirations you would go for the other Dufours, the Performance Cruisers.

In any case, for the Dufour Grand Large it would be worth ordering the asymmetric spinnaker (a bargain for an extra $2061, which comes with a short bowsprit and extra winch on the coachroof, for the halyard, to give you more sail area off the breeze, particularly in light air.

But if you want a comfortable cruiser that is easy to live with, easy to sail and easy to enjoy, the Grand’Large will look after you. It may be one of an alternative, cheaper line and it is a different style from the cruiser/racers, but not much has been lost in the translation.

DUFOUR ADVANCED TECHNOLOGY
To enhance its yachts’ performance, strength and finish, Dufour Yachts has invested in high-tech construction processes. Proven avant-garde techniques not only provide added pleasure and safety for future Dufour owners, they also protect the environment. At the leading edge of technology, Dufour Yachts are using these processes on all of today’s models.

Vacuum injection moulding, or resin transfer moulding, is used for the decks. Polyester resin is injected between a male and female mould and creates homogeneous GRP structures with a faultless finish and much better mechanical quality.

All Dufour yachts have a stringer system reinforced with Twaron in the keel area. The full structure is laminated on to the outer hull, to ensure a perfect spread of the load on the entire hull structure.

+ Position of headsail winches; Good interior volume
– Nothing to report