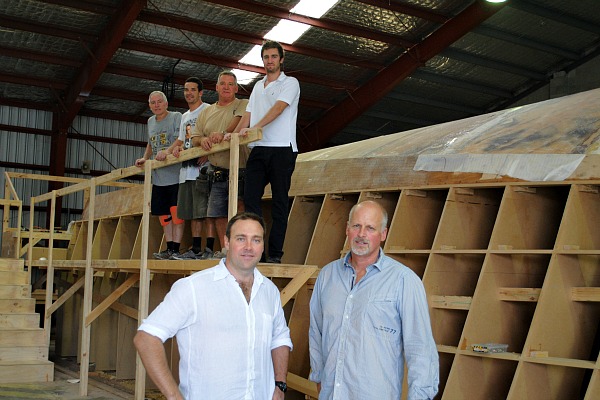 The first model, a 53-foot sports yacht, is already under development at the company’s yard on Queensland’s Gold Coast.

“Elandra Yachts is dedicated to building semi-custom cruisers for a discerning market,” said Durman. “Our customers are people who have owned a number of boats over many years and know exactly what they require for their next purchase, be they coastal cruisers, retreat seekers or entertainers.

“We’ve studied current sports yacht offerings and feel that there is a niche in the market. It’s not mass market we’re appealing to. Our buyers are looking for that something extra, be it build quality, space and volume, ride and handling, cruising range and fuel efficiency, the ability to customise, or a better buying and owning experience.”

Durman said Elandra sports yachts are designed for elegance and practicality at rest in an idyllic bay and engineered for performance, strength and safety at sea.

Durman said the company plans to build no more than three boats in the year following the official launch of its first boat, scheduled for the Sydney International Boat Show in July 2014.

The brand has developed rapidly from a meeting of minds between Durman and renowned boat builder and naval architect Grant Senior, two individuals with a vision to create a brand and a boat that is world class in style, quality and performance.

Surprisingly, Durman and Senior met only in May of last year. By the end of the year they started sharing ideas and sketching their early plans for a new kind of luxury cruising boat and a new approach to the customer experience.

“We began with the idea of a sports yacht,” said Grant Senior. “It is a versatile design that is equally suited to bays and harbours or the open sea. We began with a 53-footer simply because of the client base we will attract. These people have owned a number of boats, they know what they want in terms of build quality, function and performance; and overall size and space are important factors. Our research has shown that our position in the marketplace would not allow for anything smaller than 50 feet.

“The hull has a fine ‘point of entry’ bow with a slight flair for seakeeping and efficiency and broadens out to a wide 17 feet that is maintained all the way aft to the transom. So the cockpit is vast for a boat of this size. It is one of the widest-beam boats in this category and one of the most fuel-efficient.

“We studied and discussed propulsion at length and finally opted for a traditional turbo-diesel and shaft system both for efficiency and maintenance purposes. The boat will have shallow prop pockets to miminise shaft angle and increase efficiency.

“We have designed the running surface so that pod drives can be accommodated if the customer wants them.”

‘Versatile’ is word that both Durman and Senior use often is describing the concept for Elandra.

“Our plan is to show customers what we have in mind and then listen to their ideas,” said Durman. “Anything is possible within the framework of the major moulds and structural bulkheads.

“The concept design for Elandra was a collaborative effort and we want the evolution from here to be collaboration between our team and our customers. They will have owned a number of boats over many years and we expect they will have firm ideas about how they want a new boat to work for them.”

THE NAME AND LOGO

“We wanted a name that is quintessentially Australian,” said Durman. “I began with a search of place names along our coastline for ideas and inspiration. One or two kept appearing but I wanted something that was associated with the ocean, with Australiaand was a little intriguing.

“Elandra stood out and its general translation from indigenous language as ‘home by the sea’ has a beautiful connection with our vision.

“We also needed to celebrate the trans-Tasman make-up of our team. Senior and Bill Cranston both hail from the land of the long white cloud and they are vital to the development of Elandra. So the logo incorporates a subtle New Zealand Maori fish scale pattern.”

“We have set the build quality benchmark high,” said Durman. “And we have to stand behind what we deliver.

“We are offering a world-class warranty and a level of service that is second to none. Being a semi-custom builder, we accept that our volumes are not nearly as high as a production builder, but a higher quality product and service offering is what we’re all about.”

The company has developed software that records every element of each boat, the serial number of every major component, its warranty and service history, all contacts with customers, and scheduled maintenance and service programs. However, Durman is quick to point out “the software alone does not do the job; it simply provides us the facility to manage and monitor effectively and efficiently.

“We want nothing to fall between the cracks,” said Durman. “From the moment of our first conversation with a customer and well beyond delivery, we stay with the boat, ensuring that all regular servicing is completed to our and the original manufacturer’s recommendation. The idea is: ‘you don’t call us with a problem, we call you and arrange a service before there is a problem’.”

According to Senior, the single biggest grievance to owning a big boat is warranty and component failures, quite often resulting in the owners not feeling confident about their boats or the brands in which they have invested.

“Most of these issues can be eliminated,” he said. “We ensure exceptional build quality, use high quality components correctly installed and allow for component redundancy. We also equip our vessels with automatic back-up systems and adopt a scheduled service and maintenance program. The result is a dependable, reliable and capable boat that is ready to roll out when you are.”

Senior brings more than 30 years as a boat builder, designer and innovator, first with blue water racing yachts and more recently with Formula Cruisers in his nativeNew Zealand. His responsibilities cover operations and naval architecture.

Durman grew up around boats on the northern beaches ofSydney. He learned to water ski before he was old enough to go to school. He was an avid weekend sailor out of the RSYS at Kirribilli and also competed in Melbourne toHobartand Pittwater toCoffsHarbouroffshore races.

More recently, Durman switched from wind power to piston power, competing in offshore powerboat racing and won the Australian title in his rookie year in 2006 and again in 2011. Later in 2011 he and co-pilot Ross Willaton earned a creditable second place in the Key West World Powerboat Championships.

His love of boating was tempered by a fascination with business, with a particular focus on marketing.

Following business studies at theUniversityofTechnologyinSydney, he gained employment with advertising, design and digital agencies, working on iconic brands such as Telstra, Volvo, Hyundai, Sun Microsystems, HMV Music, and Dymocks Bookstores. In 1999 he founded his own design and marketing consultancy.

Within a few years Durman had grown the business to an annual turnover of more than a million dollars. In 2003 the team won the advertising and marketing pitch for Maritimo. It was a win that would change his life’s journey.

The growth and subsequent demands of the new boat builder required more of his time and, in 2007, he sold his agency and took up a full-time role as Marketing Director with Maritimo. The role expanded to international business development, distribution, costing and pricing and product development.

“I am proud of our achievements at Maritimo,” he said. “In a few short years we took the brand from a single model motor yacht launched in 2004 to a wider range and strong acceptance in the markets both here and around the world. Bill (Barry-Cotter) had a great vision and it was the team that delivered it. I still admire the brand and the boats – the enclosed flybridge cruisers are world class.

“The qualities of teamwork I had in my own business were reinforced at Maritimo. Bill surrounded himself with excellent people including Ross Willaton, Craig Jones, Greg Swain, Peter McGrath and Martin Lewis. But the two greatest influences on me – other than Bill – were Peter Jenkins and Dave Northrop, the company’s representative inNorth America. They’re salt-of-the-earth blokes you could depend on. We didn’t always agree but our success was in the scrutiny of ideas and once a decision was made we all worked well together to achieve it.”

But Durman again wanted to stamp something of his own capabilities in business and the meeting with Grant Senior fed the seed of an idea.

“We will build a range of boats that stand at the pinnacle of Australian craftsmanship,” he said. “As a semi-custom builder, our role is to listen to our customers, to incorporate their ideas and to build boats that bring their dreams to life. After all, they are experienced boaters, they know what they want and our job is to deliver that, to make ownership of an Elandra Sports Yacht a dependable and delightful experience.”

Senior began his boat building career as a young boy, curving a sheet of corrugated iron into a crude canoe, powered by a lawn-mower engine.

“She could spin along at about 12 knots – but we had a bit of difficultly steering!” he said.

As a boy growing up inAuckland, Senior learned to sail with his father.

“We were out on the water most weekends, particular during the summer, either racing or cruising,” he said.

By the time he was 15 he had built a 22-foot Pied Piper sail boat designed by Des Townsend.

He began a boat building apprenticeship straight out of school, learning to build both power and sail boats.

On his 21st birthday, he moved to theUnited States and began building sail boats, the first as a commission through legendary designer Carl Schumacher.

He combined building with racing and delivering yachts around the world, returning briefly toNew Zealand.

“I knew a great deal about boat design by then, but I wanted to tick off all the boxes,” he said.

While in theUS, he designed a range of retro-style runabouts for a company based at Lake Tahoe inCalifornia.

In 1997 Senior took up the reigns as General Manager at Delta Boats, a shipyard inNorthern California. It was there a few years later he met Graeme Turner, owner of Formula Cruisers inNew Zealand.

“Graeme had delivered a boat there and was looking for a service and warranty agent to look after the boat,” said Senior. “We got talking and, after a year taking care of his customer, he offered me the opportunity to design his new range of Icon game fishing boats. I had designed the first hull when Graeme asked me to join Formula Cruisers as a full-time designer.”

A few months later Senior took up the General Manager role at Formula Cruisers and designed the new range of boats for the company over the next 12 years.

Eventually he wanted to build something for himself and the chance meeting with Luke Durman blossomed into a co-ownership opportunity.

“The more Luke and I spoke, the more we learned about each other’s vision,” he said. “I think what really resonated with me was that Luke and I shared the same passion for a high quality luxury sports yacht, we had similar views on how an organisation should be run, especially to creating a collaborative culture with employees and customers.”

Senior moved to Australia’s Gold Coast at the end of last year and work began on the first sports yacht in March.