Exhibitors off the blocks and booking for SCIBS 2014 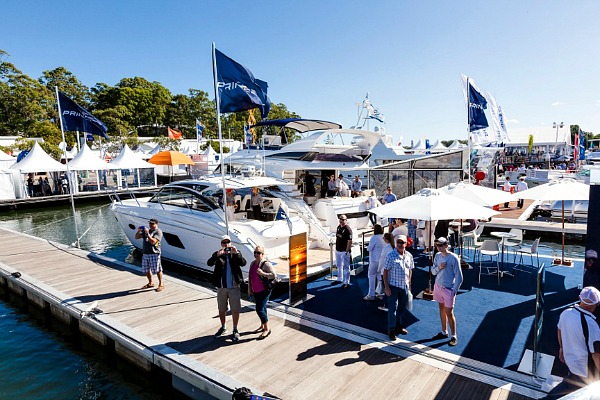 Exhibitors are clamouring to secure a spot at next year’s Sanctuary Cove International Boat Show (SCIBS), with twice as many bookings confirmed compared to the same time last year, just days after applications opened.

SCIBS head of events Johan Hasser said it was a positive sign exhibitors were feeling confident and looking forward to a great show next year.

“Exhibitors have responded well to the improvements we have made including our website upgrade, new pavilion layouts, revised display rate calculations and more networking and social events ” he said.

“It’s also a signal that the marine industry is feeling that consumer confidence is beginning to return and they are ready to capitalise on that, with the right product and the right message for 2014.”

Six months out, the Boat Show team is hard at work meeting exhibitor requests and refining the event program.

Mr Hasser said one of the main reasons exhibitors have been eager to get their bookings in was positive pickup of the 10 per cent Early Bird incentive.

The first company to get its booking in was Multihull Solutions, long-time exhibitors at SCIBS.

Multihull Solutions managing director Mark Elkington said the main motivation for getting their booking in early was to secure the best possible positions for a new concept in 2014.

“2014 will see Multihull Solutions change our SCIBS stand layout with not only boats on display in the marina, but a marquee on shore to exhibit our new brands,” said Mr Elkington.

According to Elkington, SCIBS 2013 was the best show in the company’s history of attendance.

“Sanctuary Cove is our largest show in terms of number of boats displayed, and represents a major budgetary commitment.”

Another early booker, 10-year veteran of the boat show, Maritimo has big plans for its on-water display in 2014.

“SCIBS is an important part of our worldwide marketing as we have overseas dealers in attendance each year,” said marketing manager Greg Haines.

“In 2014, we will be displaying at least six boats plus the race boat.”

Also hot off the mark was stalwart show exhibitor, Boat Books Australia. Managing director Christian Brook, said he was quick to take advantage of the new orientation of the Pavilion floor plan which offers better opportunities to position their site in a high traffic area.

“Our books are impulse purchases, so we need to be located where people flow past. We took advantage of the 10 per cent discount, and found the registration process online easier to navigate than in previous years.”

For Brook, SCIBS is one of the major boat shows on the calendar.

“SCIBS attracts people from all over the country and the world,” he said.

“We no longer have a Brisbane office, so we need to be at Sanctuary Cove, flying the flag and driving online sales.”

Sam Nicholas, Australian agent for Fleming Motor Yachts Australia, also got in early to secure the best position on water.

“Our product is niche, as our boats are built to order,” said Mr Nicholas.

“In 2014, we will have a brand new Fleming 55 on show. Sanctuary Cove is a great market for us as it attracts people from the Gold Coast, Brisbane and around Australia who may be considering heading to The Whitsundays. Fleming is known for its passage maker yachts, so it’s a great place for people to see us.”

Nicholas said he was optimistic about SCIBS 2014, with the phones already starting to ring again.

Leigh Francis of All Marine Spares is a veteran of around 20 Sanctuary Cove Boat Shows, as both a visitor and exhibitor. His reason for booking early was to ensure All Marine Spares could secure the same space and take advantage of the 10 per cent discount.

“We have booked the same space as in 2013 – a prominent, high traffic position on The Promenade.  It worked well for us in 2013,” said Mr Francis.

“SCIBS is a consistently good quality show. We meet with dealers and promote products to consumers from all over Queensland and interstate.”

A relative newcomer to SCIBS, FLIR Systems will be on show for the third year in 2014.

Distribution manager Peter De Ieso said booking early was a case of being organised before the end of year rush.

“It’s our aim to raise awareness and show that our technology is accessible through talking to people at trade shows,” said Mr De Ieso.

“FLIR’s maritime sales have grown in the past year, and our thermal technology is relatively new. We are still going through our growth phase, so there’s a lot of potential there.

“The FLIR range of thermal technology is premium product, so Sanctuary Cove is a good fit. The visitors are high quality.”

Johan Hasser urged prospective exhibitors to visit the revamped website www.sanctuarycoveboatshow.com  which includes details on the new layout for SCIBS 2014.

“Once you register, the dedicated My SCIBS section allows exhibitors to update their preferences from the time they apply, right through until the lead-up to the show,” said Mr Hasser.

“We encourage exhibitors to get in before November 20 as Pavilions A and B were sold out by Christmas time last year.”

New in 2014, Pavilions A and B have been combined and rotated 90°, positioning the main entry at the north end. Inside, they have been reconfigured to increase floor space to 5,450 sqm, with the added advantage of wider aisles.

In The Marine Village there have been significant changes: the old Village Green will become the site of a new restaurant, there’s a brand new IGA Village Market on Masthead Way and the lower boardwalk on The Promenade has been raised to street level.

These additions have resulted in a new Open Area layout with added display space on the Promenade/Quay St, and newly landscaped Docks.

The Sea Trial Display Area offers exhibitors the ideal zone to demonstrate boats, products and services to clients, the media and the broader public.

For exhibitors, there will be more networking and social events, the same great atmosphere and 9am to 5pm show hours to allow you and your crew to close the deal over dinner or a drink, renew old acquaintances, or see the sights the Gold Coast is famous for.