Expo heralds a buoyant start to the 2013 Summer Boating Season 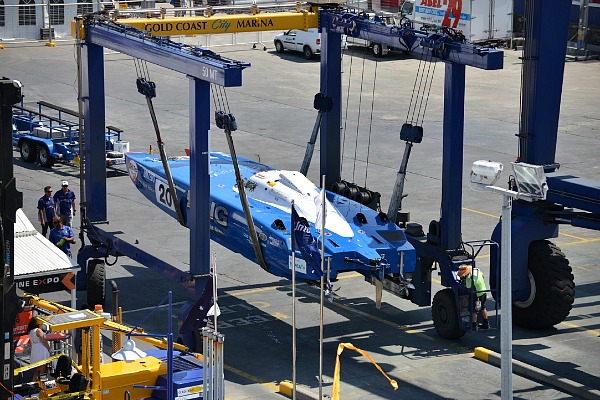 Marine industry leaders have hailed the 3rd annual Gold Coast International Marine Expo, which concluded on Sunday, a huge success with many recording the best sales results at a boat show in years.

The not-for-profit Expo has been described as 'breathing life back into the marine industry' and since its inception in 2011 has provided a real boost to the boating industry which was impacted by the GFC.

With more than 200 exhibitors, over 600 boats on show on both the land and in the water, and an expanded 3km exhibitor display circuit, Expo is certainly one of the major boating attractions on the Australian boat show calendar and is expected to grow again in 2014.

The perfect sunny days marked a great start to the summer boating season and the warm Queensland 30 degree heat that just makes you want to go boating attracted 21, 326 visitors through the gates from around Australia and New Zealand over the three-day event as independently counted and verified by Rotary Club members.

Exhibitor numbers were up on the previous year and the Expo site was expanded by 30 per cent to meet the growing demand. There were also a number of new attractions and live entertainment every 15 minutes including, the Expo High Divers presented by JSW Powersports, the Club Marine cooking show with Bart Beek, the Coomera Cup kayaking race, the new 2000sq m Family Zone, Sea World Research and Rescue Boat Tour, factory tours, workshops, presentations and seminars entertained the massive crowds with a kaleidoscope of activities.

Carly Schneider from C Worthy Marine said the Gold Coast International Marine Expo was the best boat show they had attended in the past four years.

"We sold five boats at this year's Expo with a total value of $180,000 and have an entire week booked with sea trials. Every year we attend Queensland's major boat shows but this is the best boat show result we have experienced in years," Carly said.

"I love the Expo, the organisers do a fantastic job and we look forward to next year."

JSW Powersports is one of Expo's founding exhibitors and dealer principal, Jeff McNiven, said they would definitely be back next year.

"It was a fantastic turn out this year and we had a very successful show doubling last year's sales, so we are very happy," Jeff said.

Multihull Solutions had five catamarans on display ranging in size from 41 to 59 feet including both sail and powered catamarans and sales and marketing consultant, Rachel Haynes said they were really impressed with the Expo.

"It was a really good show for us. We sold two catamarans and we have just opened our Gold Coast office at the Boatworks so we were really pleased with our sales success," Rachel said.

"The Gold Coast International Marine Expo is really well organised, everyone is so friendly and we look forward to attending next year's Expo."

Sirocco Marine North's managing director, Dylan Lopez, said they were the largest land based exhibitor at this year's Expo.

"On day one of the Expo we sold a Sealegs Amphibious Craft to the value of $105,000 and over the three day event we sold two Briggs, and have eight sea trials booked, which is a fantastic result," Dylan said.

"We just keep expanding our site and the concept behind the Expo of the event being run by the industry for the industry is what makes Expo so successful.

"We also supplied the Sirocco Bumper Boats for the Family Zone and our Queensland Sales Manager, Tom Carlisle was interviewed with Premier Campbell Newman on board the world's largest bow rider, the Chaparal 327SSX."

As one of the founding exhibitors, Sirocco Marine North are already is discussion with Expo organisers about increasing their exhibitor space and making it more interactive.

"We are extremely proud of how quickly Expo has grown in three years. The growing support of this community focused event was recognised this year with the Queensland Premier Campbell Newman officially opening the 2013 Expo," Emma said.

"The gold coin entry donation and funds raised during the Expo will be given directly back to our four charities, the Rotary Club of Coomera River, Paradise Kids, the Westpac Life Saver Helicopter Rescue Service and Sailability.

"We had almost 100 volunteers from the Rotary Club of Coomera River and Sailability assisting us with Expo and we can't thank them enough for their continued support over the past three years. Without their support, Expo would not be possible.

"There was such a positive attitude from exhibitors and Expo visitors who were impressed with the high quality entertainment, food, the Family Zone and the action-packed line up of attractions, which made Expo a great day out for the entire family.

"I would like to thank the Expo team and committee for all their hard work, all of whom volunteered their time so willingly to make this year's Expo the success that it was. The Expo is a real team effort and I am honoured to be a part of this special team of people.

"We have announced the dates for the 2014 Gold Coast International Marine Expo, which will be held on October 31, November 1, and 2."