Fairline Boats a short history of this Luxury brand 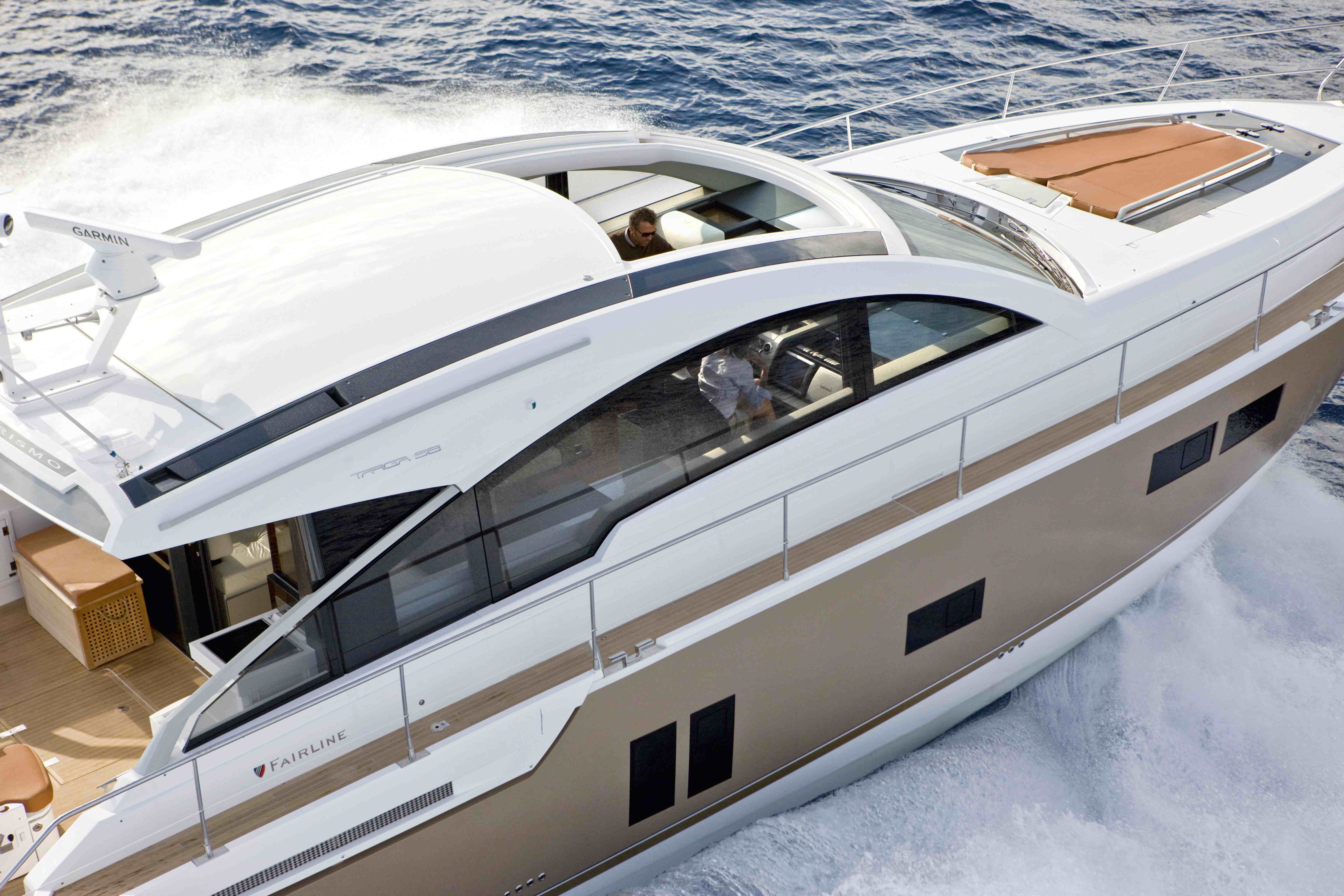 Squadron 65 wins Flybridges over 55ft in Motor Boat of the Year Award.

Squadron 65 is nominated in the Yachts over 50ft category – European Powerboat of  the Year Award.

Targa 38 is nominated in the Sportscruisers up to 45ft category – Motor Boat of the Year Award.

Squadron 55 wins Flybridge Above 50ft in Motor Boat of the Year Award.

Targa 38 wins Powercruiser Below 45ft in Motor Boat of the Year Award.

Phantom 48 is ‘Highly Commended’ in Powercruiser Above 45ft.

Squadron 68 wins Flybridge Above 50ft in Motor Boat of the Year Award.

1967 – Fairline 19 Deluxe is designed and built by Jack Newington, at his boat repair and fit-out shop in Oundle Marina.

1971 – Jack retires, passing the reins of the business to his son, Sam.

1974 – The Fairline Phantom range is introduced.

1985 – The Fairline Targa range is launched.

1991 – The Fairline Squadron range is introduced with the Squadron 62.

1996 – Sam Newington retires and Derek Carter joins from Lewmar plc as Managing Director, bringing with him a new era of modern management.

The company begins its development into a Global Brand:

1998 – US subsidiary company, Fairline Boats of North America is created to support  the brand’s development in the US market.

2001 – His Royal Highness, The Duke of York opens a new 60,000 square foot factory to supply increased capacity that had resulted from strong export sales.

A dedicated testing centre at Ipswich opens to provide a year-round temperature controlled facility for pre-delivery inspections and on-board diagnostics of electronics.

With direct access to the sea, dealer and customer trials can now be undertaken.

2005 – MBO (Management buyout) by six-strong management team headed by Derek Carter in a deal worth £40 million. The MBO is backed by Europe’s leading private equity company, 3i.

2007 – The company celebrates 40 years in business and growth from single, British operator to global brand.

Derek Carter, CEO and Alan Bowers, Commercial Director attend a Reception for winners and recipients of The Queen’s Award for Enterprise 2008 at Buckingham Palace given by Her Majesty The Queen and His Royal Highness The Duke of Edinburgh.

Thirteen years after the launch of the iconic Fairline Squadron 55, Fairline introduces the new generation model to Europe in autumn 2008.

2009 – Fairline opens a new corporate office in Singapore during April 2009 to support development of the brand throughout Australasia.

In May 2009, Fairline enhances the flagship Squadron marque with the launch of the all-new Squadron 65.

In December 2009, Fairline’s 12,000th hull goes into production at its Nene Valley factory in the United Kingdom.

2010 – In January 2010, Fairline launches the magnificent new Targa 58 GRAN TURISMO, which offers a new style and layout of cabin space from Fairline.

Fairline’s production of its 12,000th hull is completed for a Squadron 55, which arrives in Italy for customer delivery in June 2010.

In July 2010, the new Squadron 42 leaves the factory prior to her first show debut in September. The smallest in the Squadron line-up, she is still ‘every inch a Squadron’ and carries many of the design and technology advances pioneered in the larger models.

Fairline has updated and redesigned the award-winning Squadron 55 to create the Squadron 58, which is also launched in January.