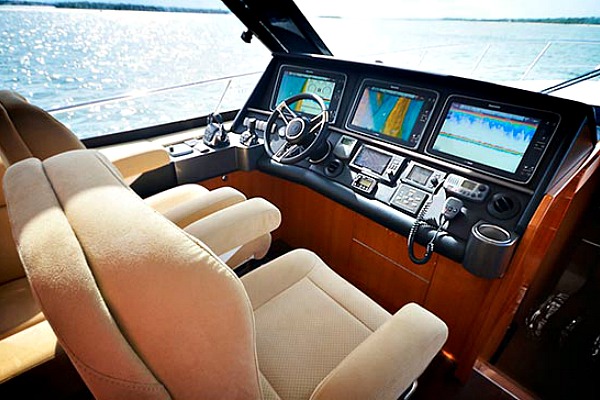 The latest new model from Riviera, the stunning 565 SUV, underwent its first sea trial this month with impressive results.

Riviera’s director of brand and communications, Stephen Milne, said this new model was a true bridge between the high performance, blue water cruising abilities of the classic Flybridge with the fish raising abilities of the Offshore Express and the single level leisurely entertaining features of the popular Sport Yacht series.

“The 565 looked extremely handsome on the water, was whisper quiet and performed exceptionally well in all of her initial offshore sea trials.

“Riviera’s craftsmen have been working around the clock to ready this brand new model for completion ahead of her world premier at the second annual Riviera Festival of Boating from May 23 to 26.

“The Festival will provide all power boat owners and those aspiring power boat owners with a unique opportunity to learn from recognised industry experts in a raft of 76 individual educational events and workshops. There are also a number of very special social events planned. The Festival is held at Riviera’s manufacturing facility on the Gold Coast where a red carpet, undercover new boat showcase is held. The new 565 SUV will hold pride of place in this impressive $15 million line-up.”

This exquisite new model has been sold sight unseen to a Melbourne client who is eagerly awaiting delivery of the first boat in this unique new model series.

The launch of the 445 SUV, the first model in this new series, was met with great enthusiasm at last year’s Sydney International Boat Show. Since, 10 new 445s have already been sold internationally and around Australia and Riviera anticipates a similar response to the sleek and stylish new 565.

Riviera’s head of design, Stephen Ford, said the new 565 SUV had a flexible accommodation plan with sleeping capacity for six to eight adults.

“The forward cabin has an optional layout with the choice of either a queen size island bed or a triple bunk bed arrangement, as displayed on hull one. This cabin also features large hull windows and deck hatch for ventilation.

“The third cabin has two metre long bunk beds, making this vessel ideal for extended stays aboard with family or friends.”

The new 565 SUV has many clever design and aesthetic features such as, the sleek, low profile hardtop with two large manually sliding sunroof hatches, which bring an abundance of natural light and fresh air into the saloon.

“The saloon features an L-shaped lounge and dining area to port with storage below. We have customised the dining table to allow it to swivel 90 degrees and drop down level with the lounge to create a double bed with cushion insert,” Mr Ford said.

A large awning window and glass sliding door opens the galley into the cockpit area, creating one large entertainment space.

A key design feature that sets this model apart is the expansive and uncluttered cockpit space with plenty of storage including, an insulated fish bin to starboard, plus clever storage inside the engine room hatch – simply lift up the hinged cockpit floor and the two large fore and aft fish/storage bins lift with the deck whilst a third square storage compartment is revealed. The mezzanine seating to port also features a top loading refrigerated cool box under the seating.

There is the option to have a barbecue centre in the transom with barbecue, sink, rubbish bin and storage or optional live bait tank or standard storage bin, as well as an optional hydraulic swim platform for a smaller tender.

Mr Milne said the new 565 SUV’s décor will give a modern and contemporary feel.

“Hull two will show the new style interior design, which features two-pack painted finishes, satin finish American oak timber, wall fabrics and timber flooring, which give a true Euro feel. Hull one however, will feature a custom décor utilising Riviera’s traditional Cherry interior requested by the owner. Such interior versatility demonstrates Riviera’s flexibility to be able to create each owner’s dream boat by customising many aspects of the boat,” Mr Milne said.

“The saloon and helm area has been designed to give all passengers excellent all-round viewing when underway.

“The large, ergonomically designed helm station to port has plenty of room for electronics including three display screens, controls and the Volvo joystick. There are four high-quality helm chairs, two of which swivel 180 degrees to face the saloon allowing occupants to join in the conversation in the saloon area.”

The recent sea trials of this exciting new SUV has exceeded expectations, and with a predicted range of more than 380 nautical miles, the new 565 will certainly make an impression at her world premier at the Riviera Festival of Boating held from May 23 to 26 at Riviera’s Coomera facility. For more information visit rivieraaustralia.com