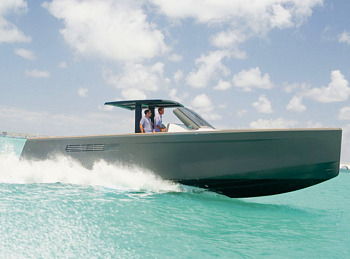 The Fjord 40 Open has a great on-water presence. This unique boat asks why hide inside when you can enjoy the outdoors ?

The rearmost seat can be flipped over to face aft. The Fjord’s state-of-the-art electronics will keep you on track. The cabin has a good sized bed and plenty of headroom thanks to high topsides. Navico recommends the Simrad NX45 NavStation for the Fjord 40. It can be a standalone central system or a network of GPS chartplotter, radar, fishfinder and engine data on a single display.

You may or may not have heard of Wally yachts. Despite their silly name, they are the most talked-about boats in the world. I don’t know how many have been built—maybe 20—but their radical, austere lines have had an influence on boat styling out of all proportion to their numbers. Wallys are superyachts built in several yards but the design themes are constant. There are no pulpits, lifelines, on-deck anchors or even protruding hatches. If winches can be excluded—replaced perhaps by an underdeck hydraulic system—they will be. Coachroofs are frowned upon, and forests of teak are felled to clad the uninterrupted decks.

What have Wally superyachts got to do with this Fjord 40 ? The Wallys introduced, or perhaps refined, a style that has affected both yachts and powerboats. I am not too sure what postmodern design is, but i suspect this Fjord comes close.

The Norwegian brand has been around since the 1960s, and the Fjords, which were imported here, were the first sports cruisers we had seen. The company is now owned by Hanse yachts of Germany whose principal, Michael Schmidt, has encouraged superyacht styling and detailing in his yachts. The larger ones have the high topsides and clean decks featured on the Wally-built boats.

Hanse bought Fjord, and now the powerboats have these characteristics. Then Hanse bought Moody, and the new 45-deck saloon yacht—introduced at Sydney Boat Show—is more of the same. The 45’s hull looks like the Fjord. The Fjord 40 is available as an open boat, like this one, or in a cruiser style, which we have yet to see here.

Not many years ago Aussies were cautious about radical styling and steered clear of dayboats. Everyone wanted to believe they would live aboard for weeks at a time. But we never do, so the fact that five of these Fjord 40s have been sold here already represents a major shift in popular opinion. Of the 30 Fjord 40s built so far, Aussie agents Windcraft have sold more than any other Hanse dealer.

The epoxy hull has a simple deep-vee bottom but the entry is quite fine so the extended bow produces that menacing, coming-at-you look, with the knuckle clear of the water, as on so many modern yachts.

The high freeboard means you can have mid-thigh-height gunwales to keep you on board.

Down below is a double bed plus a single, and a bathroom. The galley is on deck, immediately aft of the helm seats.

If you’re worried about sunburn, you can rig a bimini between the trailing edge of the roof and poles set up in the stern. There are drop curtains too if you need to keep the weather out.

The table and seat at the stern deck lift up on power struts to reveal the engine room. You can climb down into this area to communicate with the machinery.

At the heart of the Fjord are the twin Volvo Penta iPS power units. You can have the IPS 400, 450, 500 or 600. The 400 is a 300hp four; the 600—as used on this boat—is a 435hp, 5.5L straight six. The IPS refers to the Volvo drive system, the electronically-controlled drive legs with forward-facing props which can spin through 360 degrees, and enable you to drive the boat sideways, or at any angle you like.

Volvo says the 600 refers to the fact that the IPS is so efficient this engine is the equal of a 600hp with conventional drive.

The Fjord has terrific detailing. The chunky fairleads drop down into the gunwale after you press four little buttons at the base of each cleat, leaving the gunwale line clear.

Set into the gunwale sides are stainless bars protecting rectangular recesses. These are for the special square-section Fjord fenders.

The galley has a fridge/freezer with slide-out drawers. This boat’s owner had installed a second fridge to the right of the galley.

Our boat was fitted with a generator which supports a 240V Gaggenau cooktop. You can have gas, but a diesel stove is also an option.

The rear most seat can be flipped over to face aft, and the table can be lowered to form a sunbed. There are cushions for the sunbed forward, and you lift out the centre panel to let light in to the cabin below.

The cabin is a nice room with an island bed, another single (later boats have a sofa bed arrangement) and ensuite bathroom. Those big topsides mean there is good headroom.

You can carry a lot of people in comfort, and you can entertain a lot of people, too. This is a great picnic boat, but it would also be a great weekender. You could sleep a number of people on the aft seat/sunbed area, under the bimini.

If you ignore this messing around and simply push open the throttles she rockets away, the nose rises slightly then drops immediately and we are at top speed. Good modern boats accelerate so hard we should be timing them from 0-30 knots, say, as the car testers do.

The Fjord runs happily at any speed and rev range, which leads me to suspect that even the base model would have enough power for lively performance.

We had smooth seas—we always have smooth seas—but chad from Windcraft, who has done several coastal runs, reckons she’s smooth and dry upwind, directionally stable and dry downwind. Toss her around a bit and she is very sure-footed. The structure feels very solid.

IPS installations are quieter and smoother than other set-ups; you feel that something is missing and although you can’t quite place what it is, you’re better off without it. Cruising home at 27 knots, we talk easily.

Nick puts her away into a nasty, tight berth. As we approach he rotates the little IPS joystick and she spins in her own length. Then we proceed, stern-first. The hull slowly turns through 90 degrees and she is alongside the wharf. reacquainted with the mooring lines, we are reattached to Mother earth. Slow, says nick, is the secret.

You can’t really fault this boat. It is a perverse world where the Germans and Norwegians produce an open boat that Aussies recognise as something they need and embrace so readily, no longer is this the land of the flybridge.

Perhaps we have too much outdoors and in the past people have needed to hide from it.

The Fjord 40 has great on-water presence. This boat was moored side-on, so that as we approached we could see a large plane of metallic-finished fibreglass, which dominated the seascape. it was obviously a boat, but there was nothing else like it in sight.

What I like about the Fjord is that in other ultra-modern boats, the determined pursuit of clean lines has been carried too far to the point where the boat was uncomfortable or, in some extreme craft, unseaworthy. Not in this case. There is no point in suffering for art or status. Enjoy it.

With full fuel, water and eight people on board performance was as follows: