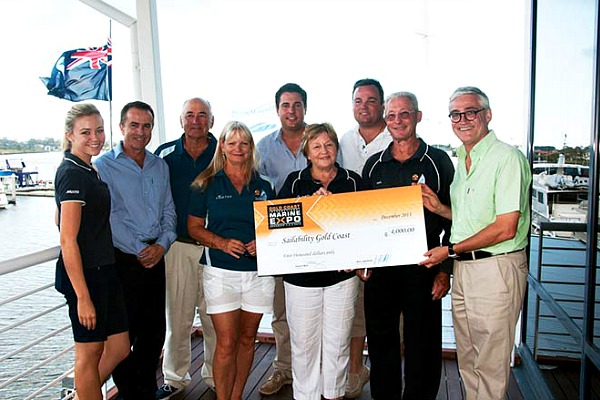 The Rotary Club of Coomera River, Sailability Gold Coast, Westpac Surf Life Saver Helicopter Rescue Service, and Paradise Kids will share in $22,000 raised at the Expo, which is a 26 per cent increase from last year. Each charity was presented with a cheque at a special ceremony held on December 13. To date the Gold Coast International Marine Expo is proud to have raised a total of $51,000 for these four charities.

The Rotary Club of Coomera River will use some of the funds to provide Christmas food vouchers to distressed families in the Coomera area, as well as assisting with their numerous other projects.

"Rotary is a global organisation and the thousands of gold coin donations will go a long way in supporting our work in the local community as well as our international projects, such as improving the health and education of children in East Timor and Myanmar, and providing skills to refugee women in Thailand fleeing from political oppression in Burma/Myanmar," she said.

Sailability Gold Coast is a local charity that supports, promotes and encourages sailing among people with disabilities and diminished capabilities.

The funds donated to Sailability Gold Coast were the largest single contribution the not-for-profit organisation has received all year.

President Paul Dinniss said the funds would be used to support the ongoing operation, maintenance, repairs and replacement of boats and six outboard motors, life jackets, cranes, and the multitude of small equipment and tools.

"We hope to put some of the funds towards a new access dinghy that we plan to buy in 2014," said Mr Dinniss.

"This year we exhibited at the Expo, which received a lot of interest from the public. We demonstrated our operations through a video showcasing how our dock-mounted crane can move sailors with a disability from the dock or their wheelchairs into the boats and we were pleased to recruit some new volunteers.

"We are extremely grateful to the Expo consortium for their continued support over the past three years."

The Westpac Surf Life Saver Helicopter Rescue Service has welcomed the funds, which will be used to purchase new communication equipment.

State helicopter services advisor for Queensland, Thomas Hughes, said these funds would help them to purchase Down the Wire Communications, allowing rescue crew to talk back to the helicopter through devices built into their helmets rather than relying on hand signals.

"These devices cost $1,200 each but will greatly assist with our rescue operations," he said.

"We are the longest running community based rescue helicopter service in the world. We proactively fly a set route looking for things people can get into trouble with such as rips and sharks. About 90 per cent of our work comes from these proactive patrols because we can see people who have fallen off surf skis or boats that have capsized.

"As we move into summer we will be extending our patrols from December 14 until the end of January, so the funds raised from Expo are very welcome as we move into our busiest time of year."

The Westpac Surf Life Saver Rescue Helicopter Service had a stand at the Expo and also performed a rescue demonstration each day with the helicopter and crew to better educate people about the vital service they provide patrolling the City's beaches.

Community relations manager, Mireille Allan, said the proceeds raised from the Expo would help support local families who are struggling with illness, grief or loss.

"Our work is complex as the families that seek support from Paradise Kids are experiencing multiple losses. One third of the families who come to us have been impacted by domestic violence, a quarter by drugs and alcohol, and 40 per cent of families contact us because of a death in the family.

"We are extremely grateful for the ongoing support from the Gold Coast International Marine Expo."

Gold Coast International Marine Expo spokeswoman, Emma Milne, said attendance and exhibitor numbers had grown from last year and so too was the amount raised for these four local charities and not-for-profit organisations.

"The Expo is a not-for-profit event and we appreciate the community's generosity in supporting our four local charities," Ms Milne said.

"In keeping with the Expo's philosophy of being a totally family and community focused event, it is pleasing to see these funds go directly back into our local community at all levels – helping distressed families, assisting people with disabilities, supporting our surf life saving rescue service, and assisting families struggling with grief, loss or illness.

"This year's Expo was a huge success with more than 200 exhibitors, over 600 boats on show on both the land and in the water, and an expanded 3km exhibitor display circuit.

"Expo is certainly one of the major boating attractions on the Australian boat show calendar and it is expected to grow again in 2014.

"The Expo committee would like to thank our almost 100 volunteers who put in a tremendous effort over the three day event and the support of our four charities, the Rotary Club of Coomera River, Sailability Gold Coast, the Westpac Surf Life Saver Helicopter Service, and Paradise Kids.

"These charities and not-for-profit organisations do an amazing job in our community and we are extremely proud to be able to support the great work that they do and we look forward to seeing them at the 2014 Gold Coast International Marine Expo."