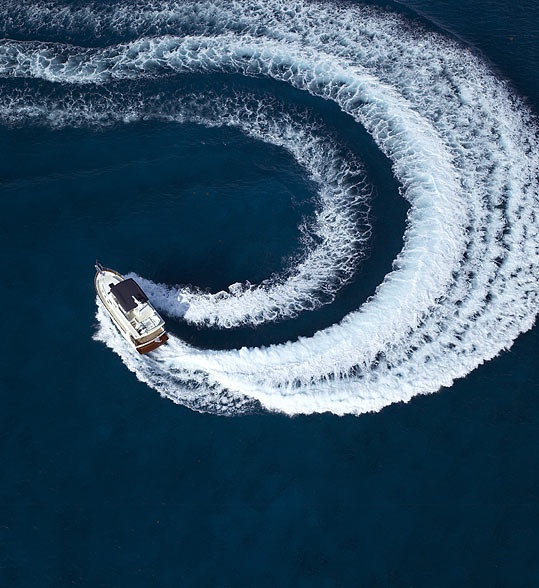 There comes a time in every boaties life that the youthful need for speed and owning a vessel that’s capable of getting from Point A to B in no time flat, fades. It gives way to a more sedate need for life’s little luxuries and being able to take in the scenery as opposed to watching it flash by.

Don’t get me wrong, it is not that older (note I said older not old) boaties can’t hack the pace anymore, let’s just say they appreciate life a bit more. Plus, having worked hard all their lives, why shouldn’t they enjoy the fruits of their labour.

By the time most boaties get to this stage they have already owned a few boats and in the case of the owner of this new Grand Banks 42, no names, no pack drill, his last boat was a Riviera flybridge, fully decked out for game fishing. He’d done it all, starting out in small boats and working his way up. But now that his passion for fishing has ebbed and he’s semi-retired, he and his wife are intent of seeing out their golden years cruising the East Coast of Australia from The Cape to Tasmania.

They needed a seaworthy and stable craft, capable of making long passages in comfort.They didn’t want to be cramped, they wanted to be able to occasionally take another couple along for company and they wanted to do it in style.

The owner and his wife were doing the rounds at last year’s Sanctuary Cove International Boat Show and considering a few options, when they came across the Grand Banks 42. They went onboard for the guided tour and basically said ‘we’ll take one’, no ifs or buts.

So, what attracted them to the 42 ? Well, unlike some boat manufacturers that include the bowsprit and swim platform when sizing their boats, which means a ‘so-in-so’ 42 footer may really only have a waterline length of about 37 feet, the Grand Banks 42 has a waterline length of 42 feet, which equates to almost 50 feet overall. That makes for a lot more usable interior space and use that they have.

And apart from all the beautiful teak joinery and panelling, lavish suede upholstery and quality fittings, one of the biggest drawcards for this new owner was the immense aft stateroom. Not only is it spacious, but with the new owner being 6′ 2″, the 6′ 4″ head height’s a real bonus.

The aft stateroom boasts a queen-sized island bed, hanging lockers, two en suites “the head’s to port and the shower is to starboard” cavernous drawers under the bed, bedside cupboards, a bench with draws along the starboard wall and a mini office area to port. It’s just like having a luxurious office, albeit a small one, inside a five-star hotel.

So what’s the Grand Bank’s story ? These boats are built at two factories in Johor Bahru in Malaysia, where around 14,000 employees produce around 160 boats per year. And while only six boats were brought into Australia last year our strong dollar against the US dollar is making them a much more attractive option. Another plus for this boat builder is the fact that no two boats are the same, Grand Banks is a semi-custom builder. For example, even though this hull has been around since the 60s and was reworked a decade ago it is still regarded as a new boat. This one was the 1525th to roll off the factory floor and there are many subtle changes to number 1525, starting with remodelling the saloon.

The point of entry is now via stairs leading through the aft bulkhead on the port side. This means that when running in a bit of a sea the aft saloon door can now be left open to aid ventilation and spray isn’t sucked into the saloon. The sliding skipper’s door next to the helm on the starboard size was retained. 1525 has also had a change of forward cabin layout. Standard layout is two veeberths in the bow, a port cabin with two single bunks and the head and shower to starboard. But this boat uses the entire bow area as the forward stateroom, which makes it almost as large as the owner’s stateroom aft, but the head height is slightly lower. The guests are certainly going to get looked after. And while this layout only caters for two couples, each get ample and private accommodation.

The joinery and panel work in both staterooms is superb. Grand Banks actually owns its own teak plantation in Burma to ensure a reliable supply of timber for its boats.

So what does this mean to prospective new owners ? Uniformity. The woodwork on each boat is all cut from the same teak tree. The timber colour remains uniform throughout the boat.

Natural light is also well catered for with eight portholes in the aft cabin, six plus three hatches in the forward stateroom and large glass windows surrounding the saloon. The saloon uses all available space well and again the joinery and panelling were superb. The galley is L-shaped and features a four-burner gas stove, wall-mounted convection/microwave oven and a small freezer and fridge. For extended cruising I feel another bigger refrigerator would need to be fitted, although there were two large Esky come storage boxes out on the aft deck.

Across from the galley is a removable dinette surrounded by an L-shape lounge upholstered in beautiful bone-coloured Ultrasuede. Two chairs are also supplied, so the dinette can comfortably seat six. A lovely brass lamp is positioned above the dinette and this adds a touch of old-world charm. Behind the helm seat is a cocktail cabinet and icemaker. You almost don’t even have to leave your seat when it’s your shout. The helm is a work of art in itself. It’s a highly polished, wooden ‘six spoker’. But while all the polished timber about the helm and saloon depicts a time long gone, thecomprehensive electronics package and engine gauges quickly remind us this is a state-of-the-art vessel.

Seated at the lower helm station the skipper gets excellent 360-degree views, but you do lose a little forward vision when the bow is trimmed up. Up on the flybridge there’s no such problem. There are no clears up here, but the area is covered by a large bimini. There is two heavily padded seats at the helm, so the skipper and his companion can still enjoy each other’s company when underway. Because of the large amount of room on the flybridge, this area becomes an ideal area for alfresco dining, while the aft deck is large enough to be used as a dance floor.

There are wide walkways down each side of the forward stateroom roof that lead to another work-of-art ‘ the bowsprit, winch and anchor locker. It’s fully automated and finished in Burmese teak and highly polished stainless steel. Access to the roomy engine room is via a hatch and ladder beside the helm seat.

Because Grand Banks are built for the American market, the onboard wiring and plumbing is coded. The boat comes with an excellent manual outlining the procedures for regular maintenance, warranty requirements, fittings and their suppliers and plumbing, it even tells you how to remove the engines out. Everything about this engine room has been designed to make life easier for the skipper and any mechanic who may be required to work on the engines.

Access around the twin 330B Cummins diesels is ample, there are sight gauges in the fuel tanks and the dipsticks for each motor are clearly visible and easy to get at for daily maintenance. The engines are fitted with Aqualift exhausts, while the optional 9.5kVa Onan generator also features a Vernay silent exhaust system that discharges underwater. It’s all designed to limit noise, as is the 5cm thick high-density lead and foam sound installation in the engine room. Even at ‘WOT’ pulling 19.5 knots the engine noise in the saloon only required me to raise my voice slightly to carry on a conversation; dropping her back to cruise speed at 2200rpm and engine noise was minimal.

Out on the water the ride from this semi-displacement hull with her massive 28″ props was leisurely, stable and surefooted, but not slow, stable and surefooted. Top speed was 19.5 knots, but she’s probably capable of a tad over 20 knots with a clean bum. At 2000rpm she cruised along at 10 knots, 2200rpm put 14 knots on the GPS and at 2700rpm she hit 16 knots.

Acceleration was smooth from a standing start right up to ‘WOT’ and being a semi-displacement hull there was no transition onto the plane. The rudders on this boat seemed relatively small to me, but the hull reacted to the helm well, it tracked straight and those 28′ props aid manoeuvring dockside and at slow speeds. Weighing-in at around 16,000kg this boat is no lightweight, but it’s her weight and heavy chines that keep this hull so stable. She also has plenty of bulk below the waterline, so without the clears on the flybridge, which tend to act like sails, she isn’t too susceptible to the wind during closequarter manoeuvring. However, as manoeuvrable as this boat is using the motors, I’d still like to see a bow thruster fitted, because it really would make life easier.

The Grand Banks 42 Motoryacht is a boat designed for people who wish to enjoy cruising. The semi-displacement hull of every Grand Banks offers the best of both worlds, economical and comfortable cruising around 9 knots, with the ability to achieve planing speed with bigger motors fitted. According to the brochure the demands of many different cruising experiences as well as the wide experiences of so many owners has enabled Grand Banks to earn a reputation for being the choice of those who truly understand what it takes to go cruising. It’s all about economy, comfort and cruising in style. And that is an understatement when people start talking about the Grand Banks 42 Motoryacht.