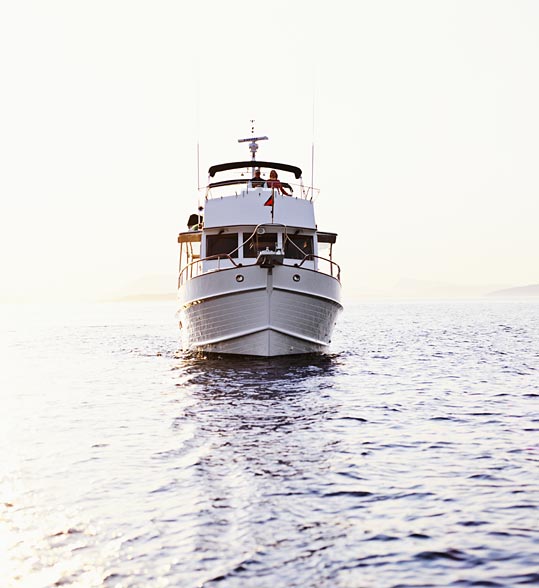 EPITOME OF A LADY

This one’s for those who enjoy the journey as much as the destination.

Part of the fun of cruising is getting there comfortably and safely. That’s why Grand Banks cruisers have been popular with the cruising fraternity since the first 36 was launched some 40 years ago. The original Grand Banks design was the epitome of the classic trawler. It was comfortable, seaworthy, but also slow and with limitations.

Over the years American Marine, the owner of the Grand Banks design, have expanded the range. After setting up factories in Singapore and Malaysia, Grand Banks now offer three very different designs – the Eastbay Series, Aleution Series and the classic Heritage models like the Grand Banks 52 Europa.

When Gold Coast Grand Banks agents Adrian and Bill Alle landed a 52 Europa in Sydney for a customer just before Christmas, it was all go to get the boat commissioned as the new owner wanted to go cruising over the holiday break.

This meant a dash to Sydney to review the boat because it would not be coming to Queenland until later in the year when the owner and his wife planned to cruise to the Whitsundays.

As you can appreciate, when a boat is being commissioned, there are all sorts of technical types bolting and screwing things in place. There’s the odd toolbox to trip over and protective plastic everywhere. The boat was not at its best, but what I saw looked pretty impressive.

PERFORMANCE & HANDLING
Even though the 52 Europa is a cruising vessel, she gets along in a most lady-like manner. She has a nice motion and feels solid. Cruising down Sydney Harbour at 11 knots and a low 1500rpm was comfortable. We poked the nose into the swell at the Heads and increased the speed to 12 knots where she sat happily.

But if you want to get somewhere quickly, it will push along at 20 knots. Probably the best cruising speed on a long trip is around 2000rpm and 14 knots. At this speed the Smartcraft readout was showing a fuel usage of around 48lt per hour.

It is even more relaxing using the autopilot. Coming back in on the swell the boat sat virtually straight with the autopilot, we only needed to correct the swing about two to four degrees either side. It only needed a slight tweak to change course to miss the Sow and Pigs and at Bradley’s Head, winding on 10 degrees had us heading back under the bridge.

The stabilisers came into their own in the washing machine chop set up by the ferries coming and going from Circular Quay.

CONSTRUCTION & LAYOUT
Although the overall length is 16.48m (with the boarding platform and the pulpit), it’s a full 15.7m (52ft ) on the waterline, which gives the hull enormous internal volume.

The simulated-plank moulded hull has the traditional straight bow with a low chine that hardens towards the stern, with a deep skeg on the centre line that’s deep enough to protect the propellers. It flattens out aft to a slightly rounded transom, which helps the boat to almost plane and gives a very stable motion. Even without the stabilisers the owner had fitted.

The superstructure is square – there’s not a curve in it. The designers have broken the shape up, however, with two side plates that run from the low bulwarks to the flybridge deck. The side deck is full walk-around from the bow to the generous aft cockpit.

A large hatch in the cockpit sole leads to the engine room through a large void space that houses a washer and a dryer on one side and a workbench on the other, and there’s still plenty of room for storage. Now step through the door into the engine room, it’s the biggest I’ve ever seen on a small ship of this size. The space houses twin Cummins 540hp QSC diesels, is full stand up and walk around. It’s an engineer’s dream.

The square superstructure gives full headroom in the saloon with a level walk-in from the cockpit. The saloon is open plan with a full view past the galley, right through to the pilothouse windows. The lounge area is aft with an L-shaped settee around a folding table that can be raised or lowered hydraulically, with two armchairs sitting opposite.

The large galley is on the starboard side with all the mod cons including microwave, dishwasher, two fridges, four-burner cook top with fiddle rails to hold kettles and saucepans firmly in place, plus a garbage compactor. A feature is the drop-down plate and cup storage mounted above the Corian bench top. The cabinetry is top class with all the draws built using good old-fashioned dovetail joins.

The pilothouse is a true pilothouse, but without the bulkhead that usually separates it from the saloon. But there’s a small partition with a forward facing bench seat on the back of the dinette.

The helm station is on the centre-line with a very comfortable driver’s seat behind a traditional wooden wheel. The centre windscreen opens electrically. It’s too far to reach over the console to open it manually.

With the Cummins engines comes the Smartcraft engine management system and as well as a Raymarine plotter and a sounder, the owner has installed a forward-looking sonar scanner for use on the reef. The engines are controlled by a smooth Morse electronic system.

Two substantial doors lead out either side for access to the side decks and the bow. These give the feeling of standing in the pilothouse of a much bigger boat. Although when you look behind, there’s a lot of boat out the back.

The companionway leading down to the three sleeping cabins is on the port side of the helm station.

The owners cabin is amidships and is bigger than many main bedrooms in a Gold Coast apartment. The cedar-lined his and hers hanging space has louvred doors, there are bedside tables and a large vanity table with a big mirror and plenty of drawers. The head and shower are in separate compartments. The cabin is very comfortable.

The guests or family is well looked after also. Up front is another cabin with a Vee-berth that can be filled-in to make a sizable double. There’s another double cabin on the starboard side and both share a guest bathroom.

But wait, there’s more. Up top there’s plenty of room for entertaining on the flybridge deck. Access is by a moulded stairway from the cockpit.

The upper helm station is virtually a duplication of the lower one. There are lounges, a table and an area for a barbeque and wetbar. There is another icemaker up here too. The owner’s philosophy is you can’t have too many.

The tender is brought onboard by a crane and stored on the deck over the aft cockpit.

There are so many places for people to relax on this boat that the skipper would need to take a head count to make sure everyone was onboard before leaving the wharf or an anchorage.

GRAND BANKS HERITAGE
The Grand Banks 52 Europa is a fine, long-range cruiser with superb entertainment and living spaces. With accommodation for six adults, this yacht has the space and dependability cruising boaters demand.

Backed by decades of Grand Banks history and refined boatbuilding techniques, the 52 Europa provides you with superior long-range cruising without skimping on luxurious living.

One look at the spacious salon and pilothouse and you’ll see why the Grand Banks 52 Europa was designed with families and friends in mind.

ENGINE ROOM
The engine room of the Grand Banks 52 Europa is huge. There is full stand up headroom and space to virtually walk around the two Cummins QSC 540hp diesels.