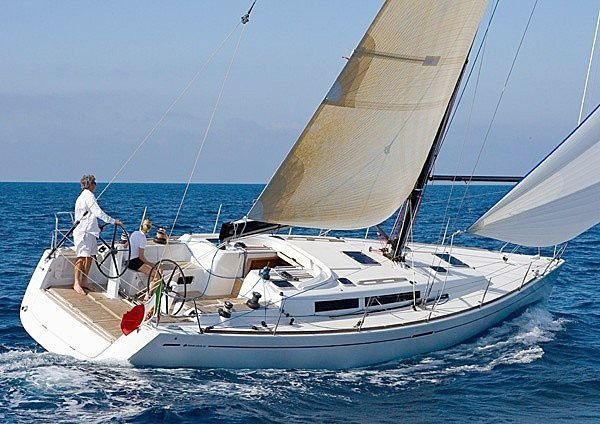 But a cruising boat ? A lot harder. I once chartered a production cruising boat, which worked beautifully as a day-sailer. In the middle of the night I discovered that if you sat up in bed from the wrong position you knocked your brains out on the moulding overhead.

So it is nice to ask someone who has experience of the test boat. In the case of the Grand Soleil 43, fate delivered to Sydney Josette Verkerk who, with Peter Hoving, sailed their Grand Soleil 43 Quiddity 17,000 miles in nine months, from Holland to Sydney. And then, at the time of writing they were having Quiddity measured for an IMS rating and had entered the Sydney-Hobart.

A bit of background. The Grand Soleil range is built by Cantiere del Pardo in Forli, an inland town 70km SE of Bologna in Italy’s north. The yard’s reputation was built on traditional cruising yachts, but this northern summer they claim overall victory in the IMS European titles and class C1 and C2 in the IMS Worlds in Capri.

Australian importer Ken Langford brought in a 38, then decided to get serious about the business and set up Yacht Italia in a flash headquarters at The Spit in Sydney. The company also handles Ferretti cruisers.

The 43 and the cruiser/racer 40 were moored side by side, a classy duo in dark-blue hulls with the freshest, brownest teak decks you have ever seen.

The 43 is a classic cruiser, with longish overhangs and weighing in at 8500kg, with 3000kg in the bulbed keel. The rudder is a high-aspect spade.

The builder offers a choice of deep or shallow keel, horsepower for the auxiliary and size of the (masthead) rig. You can also specify a cutter rig, with runners and a removable inner forestay.

Ken reckons it is a great bluewater rig, because the boat is happy in a blow under staysail and triple-reefed main.

When sailing under furling genoa, the forestay unclips and stows, and you can tie up the runners out of the way.

The three-cabin arrangement limits cockpit stowage, as the volume beneath the cockpit seats is given over to cabin space. As a result the cockpit lockers are quite shallow, though on Quiddity the deflated dinghy lives in one.

The hull is strengthened by a grid system bonded to the handlaid hull.

There is no choice of accommodation layout –  there are three cabins, the master cabin forward and mirror-image double cabins aft either side of the centreline.

The galley is an in-line arrangement down the port side of the saloon, but support for the cook is provided by the fore and aft centreline seat. The 40 has a terrific arrangement where the centreline seat can be slid towards the galley for cook support.

Josette: “The galley is perfect. Peter and I both believe in good meals in heavy weather, because it is usually cold, but neither of us gets seasick”.

The interior is trimmed in honey-coloured mahogany with a high-gloss finish, a style the Italians have made all their own and it certainly works for me.

There are two bathrooms, one en suite with the owner’s cabin and the second is on the port side aft of the galley. The owner’s bathroom includes a nifty double door arrangement, in a clear, lightweight material that protects the bathroom area from shower spray.

Before you sail, you motor. Ken Langford reckons the smaller motor (40hp) is fine for the Mediterranean, but for local conditions he prefers the 56hp Yanmar. It is a very quiet motor, even at hull speed, about 7.5 knots.

We unhook the runners (simple tackles with camcleats) and put them away. Ken winds on the backstay with the winch handle. The crew fiddles around to get the sheet leads right. The mainsheet is a simple 6:1 tackle; the traveller lines are 4:1 leading to camcleats.

The traveller is on the bridgedeck at the front of the cockpit. It looks as if the mainsheet will get in the way when using the companionway, but in practice it does not. Ken reckons that for racing he would add a fine-tune system.

There is a lot of Harken on deck, but the standard furler is a European brand. Ken says that if you want to race you would specify Harken here as well, because the drum is removable and race sails can tack at deck level.

With everything trimmed properly this cruising hull starts to frolic. It wants to sail high. I’m trying to keep the windward tufts streaming on the headsail until I get a feel for things, but the hull pushes its nose up higher than 30 degrees and shows no sign of slowing. And when it reaches the angle it wants it settles down and almost steers itself.

Josette reckons that Quiddity’s North sail wardrobe enables the boat to go as high as 27 degrees and do 7.6 knots in 15. “With the small jib she will point even higher, up to around 24 degrees”, she says.

The wheel is very big and beautifully bound in stitched leather. The steering is low-geared, a surprise to me after sailing so many racer/cruisers recently, but perhaps it is better for cruising where razor-sharp reactions are not needed.

The Grand Soleil is not a complex boat, but the builders have departed from the norm where they thought necessary e.g. in the rigging. The standing rigging is continuous, the upper diagonals are carried to the deck so they can be adjusted.

Uppers, intermediates and lowers attach to rigging screws at the chainplate, which in turn is connected through the deck to a below decks stainless strut which feeds rigging loads into the grid system. For better rig tension open-faced bottle screws are used, instead of the more familiar turnbuckles.

And then there is the optional cutter arrangement (sloop/cutters used to be called ‘slutters’, but perhaps that term is best forgotten here).

“We use the cutter rig when the wind reaches 25 knots”, says Josette, “and the boat is very stable with this rig.

“But we had a lot of light-wind sailing, when we use the gennaker”.

Ken Langford adds that the boat is very comfortable in a blow under staysail and triple-reefed main.

This is a stylish boat that sails well. The standard-spec 43 is priced at $434,000, rigged and ready to go, but that will vary with exchange rate.

It is not cheap, but neither is the price stratospheric. Ken Langford reckons that even in Europe Grand Soleil attracts second and third-boat buyers, because you need a bit of experience to shop wisely in this corner of the boating market. Josette and Peter have no doubts.

Peter flew back to Holland to attend to business and Josette set about getting Quiddity rated under IMS for the Sydney-Hobart race.

The Modern Boating team asked Josette about their boat. Why did you choose the Grand Soleil ?

Performance and beauty in one package.

What changes did you make to the standard boat?

We had the underfloor grid/bulkhead system strengthened at the factory, because we were planning to sail Quiddity around the World. When we get back to Europe the company wants to slip the boat and check it all over.

We upgraded the winches, added a suit of North sails, and put 13 gel batteries under the floor. We added central heating and the Autohelm 7000 has been fantastic.

The standard fridge was not good enough for tropical conditions, so the company paid for a better system.

A few days after we reached Sydney the hot water element burned out. But a new one arrived from the factory four days later.

What would you change now? Only the HF radio.

Worst weather ? With more than 50 knots of wind we were running towards the Colombian coast in 8m seas when a freak wave knocked us flat. Quiddity came straight back up and nothing broke. We put up more sail to run a little faster.

We also had strange cross-seas, from Samoa to Tonga and Tonga to Fiji, where sea mountains come very close to the surface.