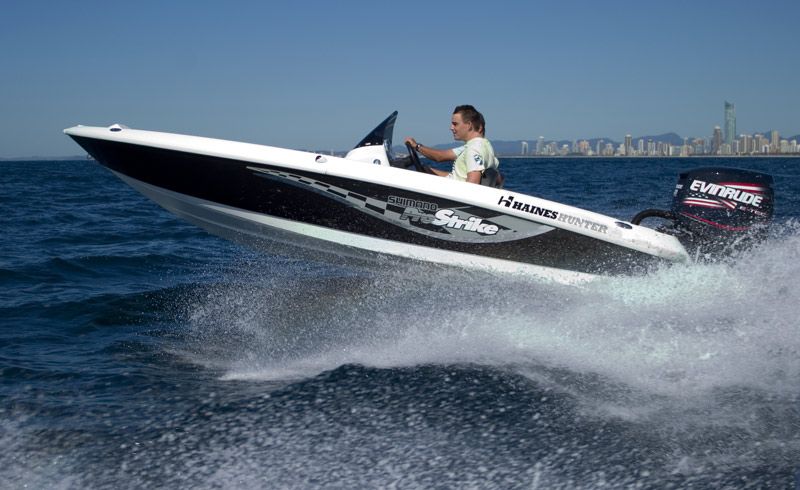 Haines Hunter’s 490 Pro Strike is one of the most exciting new fishing boats to hit the market in years. It also bursts onto the Aussie barra, bass and bream fishing scene right when many local fishos have finally realised that there’s more to this style of fishing boats than tinnies.

Even if Australians just happen to build the best fishing tinnies in the world. The 490 Pro Strike takes the concepts introduced to this country by some imported ‘bass’ boats and delivers them with a distinctly Australian favour. But this new piece of Australian fishing history was a long time coming.

Mainly because it was developed by Haines Hunter after much consultation with a carefully selected group of high profile tournament fishos, who included Modern Fishing columnist Ian Miller, television personality ‘ET’ Ettinghausen and the Shimano Fishing Team.

As you can see from the photos, the 490 Pro Strike is a low side, high deck, side console, enclosed water sport fisher. The hull was designed for this boat and no others in the Haines Hunter range. It features quite a steep deadrise at the keel (deep-vee if you insist) and extra wide down-turned chines.

The configuration delivers a soft ride, but maintains excellent stability at rest, which are ideal characteristics for an enclosed water sport fishing boat. She sits like a proverbial rock, even with a couple of hefty fishos standing on one side.

Over choppy water her ride is outstanding ‘ within the limits of enclosed water conditions, that is. Within those limits she’s remarkably dry, throwing water down and well away from the hull, which minimising the chances of any spray drifting inboard.

At speed, she handles like a dream and is very forgiving. It would take utter stupidity by the driver to catch this boat out. Thanks to her impeccable manners, excellent helm ergonomics, foot brace and those strategically placed ‘grab onto things’, any enthusiastic manoeuvres this boat’s racy mien encourages amount to nothing more than sheer fun.

Simply hang on, brace yourself securely with your legs and enjoy the ride. The 150hp Yamaha four-stroke on the test boat was new and as stiff as a board. According to the team at Haines Hunter, in the last minute rush to prepare the 490 Pro Strike for her release on the Gold Coast recently, the Haines Hunter team were still trying to get the prop right, but; needless to say, she went like stink topping out at more than 47 knots.

The 490 Pro Strike’s low sides and high decks dictate her enclosed water job description, but that’s exactly what all barramundi, Australian bass and bream fishos are after.

Both the bow and aft casting decks are spacious. Plenty of attention has been paid to maximising deck space by extending the deck surface as far as possible towards the bows and stern.

There’s also an integrated deflector incorporated into the aft deck in front of the motor to prevent any slop coming inboard after a fast stop. Hatches conceal dry-storage Compartments and the battery and lives wells below decks. Each of these wells drains overboard independently to avoid any water entry into the storage areas.

Alf there’s a 120lt tournament-style live well set behind three low-set bucket seats. It features an aeration system and a central-baffle that is now specified for the popular catch and release tournaments that are being run around the country. On either side of this are separate storage compartment with lift-out bins.

Between the casting decks is what I call a passenger well. The seats are heavily upholstered and the helm position faces a racy instrument panel with a tinted-windscreen over the console. As readers would have probably already figured out by the big lump of a Yamaha outboard hanging of her transom, she’s an extremely quick boat. So it makes good sense to have grab rails in front of the passenger seating (commonly referred to as sheeeitt bars!).

The helm itself goes beyond sporty and towards racy. So it’s reassuring to nd a well-placed foot brace incorporated into the moulding of the passenger accommodation (commonly referred to as the sheeeitt brace!).

The bow casting deck hides a pair of eight-foot long rod lockers that features an internal rack system. And while talking rod racks, along the portside there are tie downs for securing the rods you are using during quick moves.

Central under the bow deck is a 200lt dry-storage compartment with space for dual batteries to power an electric motor. An electric motor mount is integrated into the bow beside a moulded panel to site a second sounder on. Behind that there’s a special recess for the foot control. This boat is designed for electric motor power when fishing.

This is quick tour leaves out a lot of detail, but it would take another couple of pages to list all features.

Instead, I’d prefer to make this comment. The Haine Hunter 490 Pro Strike is the first fishing boat I’ve tested that I felt completely comfortable with. For the fishing she’s designed for, I wouldn’t change a thing.

The Haines Hunter 490 Pro Strike is one of the most exciting fishing boat to come along in a long, long time!

Ordinarily, I’d say that outright speed and how fast a boat can get from here to there, is fairly inconsequential for a pure fishing boat. But this boat is going to be used in a lot of pro tournaments and the fast point-to point times she’s capable of are an asset in that scene. Still, I suspect she would still perform well with less power. In my opinion the E-TEC 90hp option could be an interesting one if outright pace was of lesser importance than budget.

The Haines Hunter was powered by a 150hp fourstroke outboard for getting from Point A to B fast, but she’s also designed to operate on electric power when fishing.
Performance