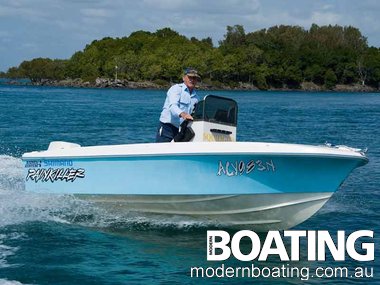 PHIL BENNETT converts an old Haines Hunter V16 R into a sporty centre console. Here’s how he did it.

After years in tin boats, I finally saw the light. It only took one outing in the Modern Fishing 1703 Trophy to convince me fibreglass is the way to go. If you read the write-up in the June ’07 issue, you’ll recall it’s a classy 5m (17ft) centre console, ideally suited to inshore sportfishing. The addition of an electric motor makes it at home on our big northern impoundments or deep in a mangrove-lined creek.

Like most anglers, I’m not rolling in money. I knew I wanted a soft riding glass boat but didn’t have the funds for a new rig. The solution ? A lot of research to find out what is the best riding 4.8m hull. It didn’t take long to work out that earlier Haines Hunters were the star performers. Models like the 445F (a production-made centre console), the 16 and 17R and Cs, and the big brother, the 565, are all classics.

I jumped in a few 445Fs. Great boats but a little too cramped for my liking. Then I went for a run in the 565 centre console. Awesome boat, but it needed too much horsepower (140hp minimum). It’s effectively too big for my small water lure and fly fishing. A good mate had a 17R, another great boat, it rides like a magic carpet, but again needed too much horsepower (115 being ideal) for my liking. A little more research revealed that Haines made a 16ft hull, both in a runabout and a cuddy cab configuration; surely this was the happy medium between comfort and minimum horsepower.

With my 4.6m tinnie sold, I was on a mission. I’d actually never seen let alone been for a run in a 4.8 Haines Hunter, but I was confident they’d have to be a half decent boat.

After finding a string of them on eBay and in the Trading Post (most with huge 20-year-old engines) I stumbled on one in pretty good nick with a comparatively late model engine for $4000. You beauty!

The hull and motor were in good condition (although the floor was rotted and the 1998 model 70hp Johnson looked like it was 30-years-old), but little else worked properly. The steering was so tight it felt like it was going to snap, and the trailer rollers were shot, not one looked like rolling. I passed on a test run, fearing I’d have to paddle back to shore, so it was muffs at the boat yard. She ran fine, so I bought it.

With the boat home, and still having no idea how it rode, I spent the next few weeks chopping the stuffing out of her.  First to go was the top. You can only handle your mates calling it the Bonny Doon Carp Killer for so long. It had to turn into something more respectable, and fast!

The spongy floor was also on the hit list, another four hours with an angle grinder sorted that out. I then had a totally gutted, unfishable shell. It was time to get serious and start rebuilding the Haines. The only problem was I had no idea how to fibreglass…

More research was required, this time on floor reconstruction, fibreglassing techniques, how to make a console and flow coating. The Internet proved invaluable, with plenty of local and overseas forums pointing me in the right direction. There’s plenty of good info on-line. And one of the most inspiring comments I stumbled across was, “It’s not rocket science, do some research and use your commonsense.” With that advice, I was confident in tackling the job.

Thankfully the stringers (fancy term for long wooden things under floor) seemed okay. I had no real fears simply cutting a new sheet of ply to replace the old floor, but if the stringers were rotten, I wasn’t going to touch them. Basically, if only the timber floor is rotten it’s a fairly small job to replace. If the stringers are gone, you’re really better off seeking professional help. Unfortunately you wont really know until you pull the old, spongy floor up. Ideally, pick a boat with a solid floor to start with.

Several days in the sun allowed the stringers to dry sufficiently before I gave them a good coating of resin prior to screwing down the new floor. With the floor in place, it was time to rebuild “literally” from the ground up.

Firstly, I put a hatch covering the recessed area directly in front of the back-to-back seats. This was the perfect spot for a kill tank. Throw in some ice and it should keep a nice feed of fish cold for hours.

No sportfishing boat is complete without a decent casting platform. So, directly in front of the kill tank, I put a bulkhead (fancy word for piece of timber supporting raised floor), 250mm high. This was a good height for the sizable platform that ran right to the nose. Through good luck the existing shelf for life jackets, formerly under the nose cone, was just the right height for the casting platform. It also made a nice, solid base with additional storage underneath.

The raised casting platform also gave me room to put the dual batteries for the 24V, 75lb Wireless Motor Guide. In my last boat I simply put the battery on the deck and fished around it. This time I had the option to conceal batteries and wiring, and was more than happy to clear the deck of trip and fly line hazards.

With the floor and platform done, it was time to build a centre console. My wood working skills are on par with Homer Simpson ( remember his spice rack ? ), but at around $1500 for a nice looking, prefabricated glass one, I figured I’d get good at making stuff real quick. I checked out a few on-line consoles, copied a few ideas and built my own out of 9mm ply. Thankfully there weren’t too many stuff-ups, and within a few hours I had a half reasonable ply box ready for glassing.

With the floor, casting deck structure and console done, it was time to reconstruct all those gunwales I’d chopped in half with the four-inch grinder. I thought long and hard about the line I took before removing the top deck. I had to imagining how it would look once I’d reconstructed the coamings and nose cone. Again, a little patience and forethought ended up with a shape that looked nice and reduced the workload to rebuild. You could go crazy and modify everything, but I simply wanted a nice, tidy centre console boat that could be ready to fish in a month.

To finish off the console, I had a local marine fabricator make a tidy alloy handrail, which I fitted with a custom-made Perspex windscreen. I installed a pre-made fibreglass hatch, a flush-mount GME marine radio, my colour Eagle sounder/GPS and the console came to life. From raw ply to a neat console for one third the price of a new one.

It was now time to start glassing. Cutting 450-chop mat to fit neatly over the casting platform, I made up manageable mixes of resin (don’t mix more than you can put down in 20 minutes) and poured it on, pushing it around with both the brush and consolidating roller (an essential metal tool for removing air bubbles and bonding fibreglass snug to timber). And same again for the floor. Get a good canister mask, eye goggles and enjoy the sticky mess and fumes.

Re-shaping the gunwales wasn’t so easy. I ended up slotting 60mm foam sheet between the two skins to create an even space for the top curve. Some careful sanding and it wasn’t long before I had a nice curved lip ready for glassing. Three layers of 10oz cloth covered the foam, and a nice layer of Q-cell tidied up the rough edges. Plenty of filling and sanding eventually created a nice, smooth surface again.

To make the back more angler-friendly and look a little smarter, I added a rear face board to cover the open corner seats and create a comfortable fascia to rest the legs against. This also created great little pockets in each corner to throw pliers, leader material, lures and flies. I may make lids for both sides yet, though as it stands the corners look quite tidy and are functional.

I also had a good think about the best area for a live bait tank. I wasn’t too keen to lose the newly opened floor space, so when a mate pointed out the size of the motor well, suggesting I could probably sneak a livewell in there, I soon cut and glassed in some 9mm ply to split the motor well. With a 500-gallon pump, the 25-litre well circulates nicely and holds a good number of live baits.

The newly shaped top deck and console was ready to paint after plenty of sanding. Two coats of International Pre-Kote, and four of International Brightside Polyurethane enamel soon had the top deck looking like new. Originally I was going to re-gel-coat the entire top, but with my limited skill decided it was just easier to spray with enamel paint.

The floor was done shortly after with flow coat. I mixed black pigment paste in four litres of white flow coat and brushed the sides and floor. Again, use a good canister mask. This stuff is equally potent and it’s hard to escape the dangerous fumes when you’re on your knees in the bottom of the boat.

Boats like the Haines are soft riding, but I still opted for a helm pad behind the console. The 14mm high-density SeaDek pad (from flybridge.com.au) not only looks great, it’s heaven to stand on, further reducing bumps. It doesn’t retain heat, even on the hottest days. I also put a SeaDek coaming bolster against the transom to make a soft fascia to rest my legs against.

After 28 long days working on the Haines, the old blue boat was turned from a carp killer into a sporty centre console. It was more work than I first anticipated and consumed all my spare time and cash. But now that it’s finished, it was well worth the effort.

There’s immense satisfaction in seriously modifying a boat. You not only save thousands of dollars, you get to create a boat specifically designed to suit your fishing needs. I simply wanted a nice, tidy centre console that rode well out to sea and that, once fitted with an electric motor, would be nice and quiet for my estuary lure fishing. You may want something entirely different.

How you set out your boat will depend on your fishing needs, skill level and budget. For me, the simple layout of the Haines is close to ideal. I just needed a decent sized casting platform at the front for estuary work and plenty of open floor at the back. And as it stands I couldn’t be happier with the appearance, ride and its fish catching ability.