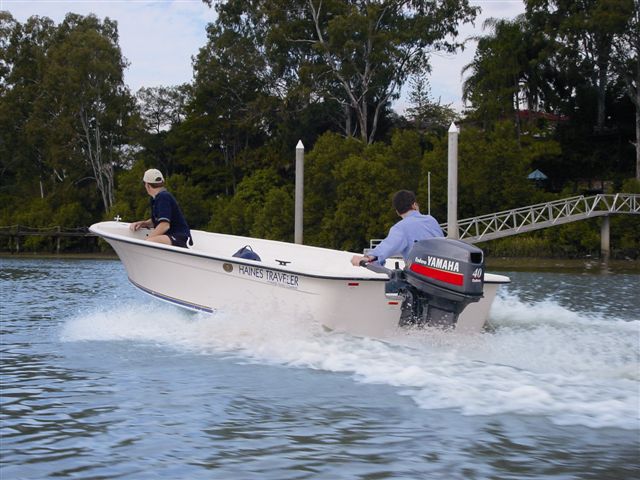 DAMBUSTERS – Two days on the water and 69 barra… what better way to test a fishing boat?

When one of Australia’s best boat builders accepted a commission to build a purpose-built vessel for one of the country’s best fisherman, we knew the result would be something special.

Well-known fishing identity Warren Steptoe worked with the team at The Haines Group to design his ‘perfect’ vessel. And the result is the most innovative 4.5m boat the Modern Boating team has ever seen.

Warren drew on more than 45 years of fishing experience to create a boat suiting the style of fishing he now engages in. Gone are his days spent wide of Lizard Island chasing ‘granders’ and world record fish. He was after an open and uncluttered boat. One he could use to chase the metre-plus barramundi he catches in places like Awoonga Dam, west of Gladstone, but still capable of tackling Moreton Bay’s notoriously choppy conditions in pursuit of big northern bluefin tuna on the fly.

When you think about it, a 5km run across some of these large, open impoundments, straight into the teeth of a howling southerly, is a bit like battling Moreton Bay’s notorious chop anyway. His logic behind choosing a hull that could handle both became clear to me when Warren and I put ‘his’ boat through a two-day test on Awoonga Dam chasing monster barra.

ONLY A 30-POUNDER
What better way to test a fishing boat than to take it out fishing ? And just to wet readers’ appetites, in the two days, between two boats, we caught 69 barramundi! The biggest went better than 1.25m, a fish that, if we could have weighed her, would’ve been close to 70 old-fashioned pounds.

There’s a bit of a ‘furphy’ going around some fishing circles that these big, freshwater barra are slow, fat slugs. Believe me, anyone who thinks that has never caught one. They pull like a freight train and take off like a Polaris missile.

By the end of this test we’d become so blase about the fishing we’d throw 25 to 30lbs fish back without even taking photos.

I never thought I’d see the day when I was disappointed (slightly) by catching “only another 30-pounder”.

PERFORMANCE & HANDLING
The hull ‘Wazza’ chose to build his boat around was a Haines Traveler TD149, powered by a 50hp tiller-steered Suzuki four-stroke. This 4.5m hull has a beam of 2.05m, a sharp-bow entry and a steep, 22.5 degree deadrise. The boat has aggressive, wide, down-turned chines, which provide excellent lateral stability and deliver a soft and reasonably dry ride. I say reasonably dry ride, because punching head-on into a strong wind across a big chop is going to throw some water inboard on any open boat. But on our only rough day, when I was sitting up front, I only had to duck twice.

While there’s a pronounced flare in the hull, the hull liner also helps repel spray, because Warren designed it to incorporate extra wide gunwales, which extend out from the hull’s sides by about 5cm. And it’s surprising the benefits this extra 5cm of ‘flair’ provides.

The boat slices through chop easily thanks to her extremely sharp bow entry, while the two exaggerated strakes on each side of the keel keep the hull tracking straight. Plus, being made from fibreglass, not aluminium, she was considerably quieter than any of her metal sisters. There was no drumming through the hull and none of that tinnie ‘amidships slap’ common with the best aluminium hulls.

With the main motor switched off and running on the bow-mounted electric (which has auto-pilot and a foot control that can be used by the driver in the stern), the only noise to be heard was the dull whirl of the electric and our own conversations. It’s an ideal vessel for sneaking up on easily spooked fish.

CONSTRUCTION
The Traveler hull is constructed using a high-grade fibreglass, double bias matting. It has a finer, tighter, and therefore much stronger weave. It uses less resin, making it less brittle and lighter. The polished gel-coat finish is one of the best on the market. It’s almost 100 per cent impervious to UV-ray damage with little decomposition in colour or resin texture.

The beauty of the Traveler series is its tough fiberglass, which, unlike alloy, is non-corrosive and toughens with age. Plus, a fibreglass boat’s hull is cast in one piece, which makes it stronger than hulls comprised of sections welded together. Fibreglass also flexes, so it acts like a subtle shock absorber for a much smoother ride. And a tinnie is not necessarily lighter than ‘glass, because the compound used in building a Traveler is tough and light.

Steptoe went for a tiller-steer over a side or centre console, because they take up too much fishing space.

LAYOUT
There are two movable seats on this boat; the aft driver seat can be mounted to port or starboard. The forward passenger seat is mounted just behind the forward casting platform to port, but it can be placed in the middle of the boat.

A Humminbird GPS/Sounder unit is mounted on the starboard gunwales just in front of the driver, where there’s also a tacho and compass. There’s another sounder mounted on the port gunwale. It’s positioned so a trolling passenger facing aft can see fish rising to the lures.

In a purpose-built locker on the starboard side behind the driver seat is a back-up starting battery, which is isolated from the 45kg, 150amp-hour absorbed glass mat battery used for the electric motor. On a panel in the transom (under the driver’s legs) is a radio, charge indicator and all the other gauges used to monitor the motor’s operation.

There’s a mini-workbench in front of the driver. It has a non-slip surface, so tackle trays won’t slide off. Under the work bench are racks for tackle trays.

A long-range 65lt fuel tank is mounted centrally under the floor and the entire interior of the boat is carpeted. A well designed deck wash stows neatly coiled in its own tubular housing to the left of the motor. It’s handy for getting slime off the carpet before it dries.

Under the centre of the forward casting platform is dry storage and there’s a large, full-beam icebox across the back. Situated slightly off centre (so the electric motor could be mounted) is a deep anchor locker. There’s rod racks under the gunwales that can handle the latest Graphite rods without damaging them and LED lighting in the cockpit.

I WANT ONE
This boat was built as a one-off project boat for Steptoe, but the response from anglers has been so great, The Haines Group has put the boat into production.

This unique vessel certainly put the brakes on those big Awoonga Dam barra. The deck wash, the gunwale rod racks and the many other Steptoe innovations, like the extended hull liner, combine to turn a great riding hull into a top, purpose-built fishing platform.

PERFORMANCE
With two adults onboard in calm conditions the TD 149 returned the following performance figures.

+ Extended hull liner; All the design innovations
– Are you kidding?

FISHING THE SHORE LINE
1. Fish the main basin a week each side of the full moon.
2. Fish the shoreline the wind is blowing onto at dawn, dusk or whenever the moon first gets high in the sky.
3. Fish near the mouths of the inlets where there are extensive areas of flat bottom 1.5 to 6m deep.
4. Trolling will produce metre fish more consistently than casting.
5. Troll with an electric motor if you have to present your lures slowly.

FISHING OPEN WATER
1. Fish anywhere in the main basin. Moon phase and time of day aren’t so important.
2. Trolling will produce metre fish more than casting.
3. Fish are where you find them. Try areas where you see people catching fish, where birds are feeding, hilltops, and the old submerged river channel, then everywhere else in order of preference.
4. Troll faster (to maximise lure depth) when open water fish are feeding aggressively.
5. Depth doesn’t matter. But choose a lure that matches that depth.

AWOONGA DAM
Awoonga Dam is located 30km south of Gladstone in Central Queensland and boasts spectacular lake and mountain views and a picturesque waterfall. It’s part of the Sunshine State’s famed Bass to Barra trail. It has excellent recreational facilities available free to the public, including shelter sheds and barbeques, walking paths and playgrounds. There is plenty of parking at the top of the twin lane boat ramp.

Boat hire is available and there’s a caravan park and camping grounds, but remember to book well ahead, especially from September to March, when the barra fishing is at its best. There’s also caravan parks and motels at nearby Benaraby and Tannum Sands.

More than two million fish have already been released into the lake and each year approximately 300,000 more are set free. These include 200,000 barramundi, 100,000 mullet and some mangrove jacks. The released fish have thrived on the huge amount of baitfish in the lake (and their brothers in some cases) to elevate Awoonga Dam to Mecca fishing status.