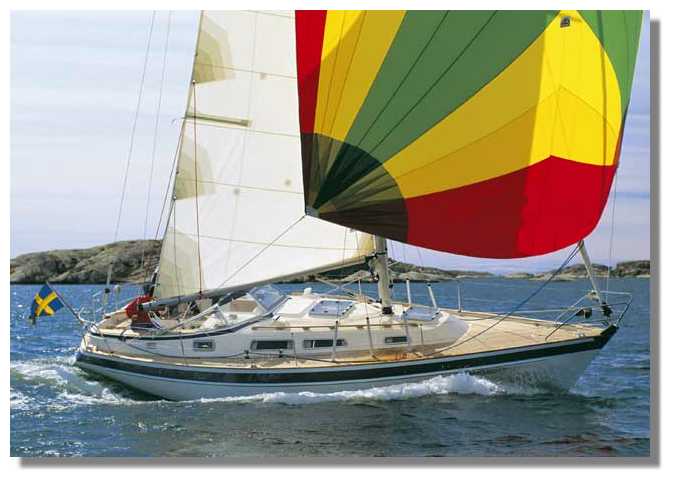 I have never understood why the Devil is in the detail. Production yachts these days have good hulls, so it is the detail which distinguishes one yacht from another. Detail is nearer to God than it is to that of the Devil.

The boatbuilder’s attention to detail is what determines how you will live with your boat, especially if you are cruising far from the marina and far from the bloke who will come and fix whatever has broken. For a large amount of money and only after a lot of persuasion.

Australia is home to 20 Hallberg-Rassy yachts all privately imported, according to agent Peter Hrones of Sydney’s Windcraft. But I had never spotted one until I was walking through an Italian marina with a friend who is a notorious Swan snob. The only non-Swans for which he showed respect were Hallberg-Rassy, the only boats we saw that he judged to be in even the same league as his beloved Swans.

The only other thing I knew about Hallberg-Rassy was that, when I checked the list of entries in the ARC (the Trans-Atlantic race/cruise) the most popular yachts were Swan, Oyster and Hallberg-Rassy. This is worth a separate discussion, but I reckon I’ll save it for my PhD.

Hallberg-Rassy is a Swedish yard which has been around a long time. The story goes that Harry Hallberg had been building in wood for decades (including a series of Folkboats) when in 1963 he started working in glass, a very early practitioner. The year before, young German Christoph Rassy had moved to Sweden to get into boatbuilding. In 1972 Harry Hallberg retired and Christoph Rassy bought the business, retaining the Hallberg name because it had a good reputation. The two were never partners. Since 1988 German Frers has designed all boats in the range, which cannot be a bad thing. The HR 31 and 34 have aft cockpits; the bigger boats, the HR 36, 39, 40, 43, 46, 53 and 62 have centre cockpits.

The first thing you notice when you step onto the 34 for the first time is the fine detail. The second impression is that there is a lot of good old-fashioned salty tradition in that detail.

The HR 34 has shallow bulwarks, capped by a domed teak toerail, which help keep water off the decks and help keep the humans on the decks. Every other boatbuilder in the World would cut scuppers into the bulwark, flush with the deck, to drain the decks. Not Hallberg-Rassy.

They have built vertical drains into the sidedecks, just inside the bulwark/toerail, and these drains are lined with copper which is flared at the upper end. The drains convey water from the sidedecks but the runoff does not run down the topsides, producing those nice vertical grey smudges you have to polish off by hanging over the side with someone sitting on your ankles. There are seacocks at the lower ends of these drains, essential for HR’s A100 rating by Germanischer Lloyd.

The mooring cleats are through-bolted on that beautiful teak toerail capping instead of in their usual position on the deck where they can break your toe. Outboard of each cleat is a strip of copper so the mooring lines don’t rub on that beautiful teak toerail. If your salty soul doesn’t respond to copper and brass, teak and mahogany, you will not appreciate this boat.

Enough of detail; let’s look at the big picture. The HR34 is a completely straightforward 5300kg sloop with a 2100kg lead keel for a 40 per cent ballast ratio. She is driven by 55 sq metres of main and jib in a fractional configuration, supported by a stout mast and massive rigging. The foot of the keel is bulbed (more a sort of flare on a low-aspect fin) and the spade rudder is hung from a notch in the hull profile.

The layout below decks is equally straightforward, though the interior trim is all mahogany. The owner’s double cabin is in the bow with two hanging lockers, plus several smaller lockers mounted high, under the deck. Have a look at the opening hatch overhead. The mahogany hatch surround has been so finely laminated you cannot find the join. The only join is in the lower capping piece which covers the laminations.

There is a smaller double cabin in the stern, on the portside. The bathroom is on the starboard side, aft.

The galley work surface is fiddled. A cover for the stove (two burners and oven) slides up from behind if you want to hide the utilitarian features. There are plenty of small drawers for stowage (small is good) but cups and plates go in a cupboard which has a sort of pegboard base so moveable dowels can hold firmly the individual items of crockery. The rubbish bin is a wire frame which takes bin liners. Hallberg-Rassy provide the bin liners!

The navigation area has a big table which takes a chart with only one fold. To the standard equipment you need to add only the radio.

You can sit six to eight at the table because you use the settees on both sides of the hull . The portside settee back is hinged and lifts up so the settee cushion can provide a wide and comfortable berth. Under the cushion you will find the lee cloth which straps to the handrail overhead. Lift that bunk base and you will find the stainless steel fuel tank which looks to be beautifully-engineered. Fuel line piping is in copper.

To check the engine you can slide out the teak steps in the companionway unit. To service the engine the whole unit is moved. Note the builder has used teak for the wearing surfaces; teak is also used at the head of the companionway, instead of the mahogany, where the weather will have an effect.

Peter Hrones is a six-footer who, wearing shoes, had an inch or two of headroom to spare in the saloon.

On deck you find twin anchor rollers, a Furlex headsail furler, and a Selden gas strut boom vang. The spinny pole is permanently mounted on the mast. The HR trademark windscreen has an opening centre panel, and halyards are led through the base of the screen to jammers on the coachroof. The teak deck is standard.

Winches are Lewmar, the primaries No.44. Hatches , some of them unique to HR, are also by Lewmar.

The main slides up easily on nifty little Frederiksen cars so you need to use the winch only for final tension. On the mooring the headsail is encased in a zippered sausage which hoists on the spinny halyard; ease the halyard, undo the zip as you go and pull down the sausage. To hoist it you really need two people, one on the halyard and one feeding in the bow.

Unroll the jib and we are away, under main and No.2. Pull on the jib car control lines to optimise shape and leech tension . The standard Elvstrom Dacron sails have excellent shape and it was nice to see chafe areas reinforced by greenhide, another traditional material.

Upwind, at first the HL 34 heels easily and I start to move out onto the cockpit coaming, extending the tiller extension as I go and expecting to need a bit of muscle on the tiller to keep her straight. Then the ballast takes charge and the boat stiffens up, refusing to heel further. The load comes off the tiller and the hull accelerates . We did not use the instruments but we definitely had 6 knots in 12-15 knots of breeze. German Frer’s velocity prediction diagram shows that 14 knots of true wind at around 40 degrees True should produce 6.5 knots of boat speed, and I reckon we weren’t far off that on this new boat with a clean bottom.

The mainsheet is a 6:1 tackle attached to a short traveller which spans the cockpit trench. If you are moored for a length of time you can remove the traveller completely to get it out of the way. The mainsheet system has a snap shackle at its base and you fasten that outboard to a fitting on the caprail.

The HR 34 is simple to handle. The Selden vang controls the leech nicely, and the traveller is so short it would make little difference to mainsail shape anyway. You will be comfortable in the cockpit because you can choose to have the dodger up or down and the centre windscreen panel open or closed.

It is difficult to summarise this boat. The trim and detailing are almost from another era, though it is both classy and comfortable, but it is a modern boat with a slippery hull. It is not cheap but how you respond to it depends completely on how much you value quality and only you can answer that one. Quality, and how Australians react to quality, is the subject of another PhD.

Don’t forget you need to add only a radio and wheel steering if you want (which would free up a bit of cockpit space) so before you decide on the HR 34’s value you need to do your homework with care.

Sailing the HR 34 explains why it is one of the top three in the ARC, though it is more Oyster than Swan in concept.

It leaves me interested to see how designer and builder treat the bigger, centre-cockpit (or aft-cabin) boats in the HR range.