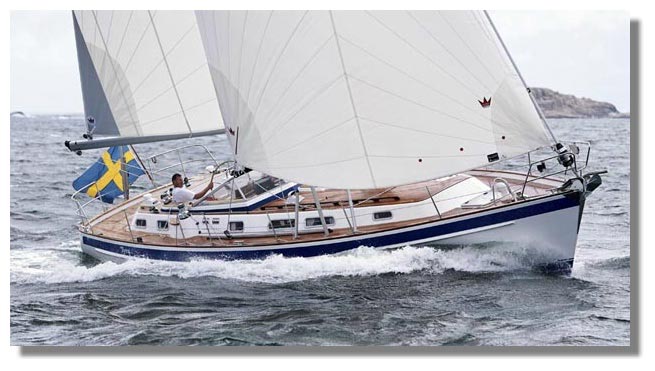 In a world where stylists play an increasingly important role in yacht design, in Europe they now share the design credits with the naval architect who is reduced to the role of number crunching dogsbody, there is strong pressure to eliminate visual clutter from the decks by getting rid of useless details like toerails and lifelines.

So it makes me feel good to see that the Hallberg-Rassy 43 has a substantial bulwark (gunwale’) running the full length of the hull.

It is also good to see that the prop shaft runs through a skeg ‘ the rudder has a half-depth skeg for support ‘ and the rudder shaft is a stainless steel bar, not a tube. There is a rubbing strake on the topsides, which is capped by a brass strip.

And then there is the HR trademark, the deck drains which funnel water inside the hull moulding to emerge near the waterline. So every time it rains the topsides are not stained by the muck washed from the deck and you do not have to hang over the side by the ankles to polish away the stains. The drains are lined with copper.

These details are reassuring because they suggest that the Swedish builders are untroubled by the dictates of fashion and they will pay similar attention to the fundamentals, like hull lay-up, bolting on the keel properly, not to mention the engineering that holds everything together.

If you look at the entry list for the ARC (the Atlantic Race Cruise) Hallberg-Rassy is one of the most popular brand names; HR owners like mixing and taking their boats places.

By ignoring fashion (to some extent, at least) the boats stay in production longer, though they are refined during their run. The original 34 lasted 15 years, the 42 lasted 12 years and 500 were built. The 43 shown here is hull No.101. They are built to meet Germanischer Lloyd’s standards.

German Frers is one of the great artists of yacht design. We will talk about that another time, but he does a great job of drawing a modern hull with traditional influences (or is it a traditional hull with modern influences ? The former, I think). The hull is laid-up in a split mould and the halves are joined at the centreline. The deck moulding goes on before the interior is fitted out which means, says importer Peter Hrones, that what goes in can come out again. If there is a serious problem with anything it can be lifted out through the main hatch.

Some centre cockpits can induce a feeling that you might be tipped out if the boat heels too far. This one doesn’t; the cockpit seats are at the same level as the deck so you do not sit much higher than you would in a stern cockpit.

The boat shown here was fitted with in-mast furling mainsail, one of a number of options for the main. Sailors tend to have strong opinions about mast and boom furlers, but the set-up on this boat, which included one powered winch, enabled Peter Hrones to sail this substantial 43-footer alone and with ease.

You can specify two electric sheet winches ‘ Lewmar 54s ‘ and an electric mainsheet winch. The main furls and unfurls at the press of a button. The main has vertical battens and radial panels on the tack and clew, and it sets much better than many mast-furlers we have seen.

With judicious use of the bow thruster this 43-footer is away from a tight dock and almost instantly under sail.

The layout features two cabins, but detail variations are available. The owner’s stateroom aft features a queen-sized, double berth off set slightly to starboard, but you can have a single berth in the space portside. The bow cabin is quite long and roomier than the stern cabin. It is ensuite with the forward bathroom, which is bigger than the one aft, resumably as it will also act as day head and will be used by the crew.

The galley is to starboard, alongside the main companionway, and is arranged in a tight U-shape. Th ere is a grabrail in front of the two-burner (with oven) stove, so you can wedge yourself in and hang on no matter what the angle of heel or degree of pitch. The fiddles around the worktop are deep. In the crockery lockers the shelves can be adjusted for height, and the shelf where the cups live features a drilled base so dowels can be adjusted to fit any type of crockery you care to buy.

The trim is in mahogany (with lighter coloured stain than usual) and there is a lot of it, up to window height. All the wood is taken from the same log to ensure colour continuity, Rolls-Royce used to do this before wood went out of fashion in cars.

Have a look at the timber trim in the HR’s overhead hatches. No joints are visible in the vertical panels, and the lower edge is capped so the hatch structure looks as if it was chopped from a solid lump of wood. I like the minimal, moulded interiors of modern yachts, but I also like wood, particularly when it is done this well.

The boat shown here has two lounge chairs on the starboard side of the saloon, opposite the dinette. You can specify an extra single berth here, with lee cloth, and you can also choose to swap the curved dinette seating for an angled arrangement that provides for another single berth, also with lee cloth.

The portside passageway between the aft cabin and the saloon is a walkway for me (5ft 8in) and a stoopway for Peter who clears 6ft . Here you will find the navigation area, the freezer (which can also be used as a fridge) and a wet locker, just two steps from the companionway.

The engine room is under the cockpit, reached through a door in the walkway. Open the door and a light switches itself on; this happens a lot on the HR43.

There is room in here for the generator, the hotwater system and the watermaker, which are all fi tted at the factory. Ducting is in place for the aircon, if specified. A heating system is standard, but for the Aussie market Peter recommends deleting it (for a credit) and adding, say, a couple of cooling fans.

Almost all the options are factory installed. Peter says local content is confined to radios, and sometimes the chart plotter. There is a lot of equipment on this boat, too much to talk about here.

The headsail cars have tackle systems so they can be adjusted under load ‘ vital on performance boats, equally vital on cruisers with furling headsails. We had 15-18 knots of breeze, perhaps 20 in the gusts. On the wind, when she got a little hard-mouthed in the gusts, Peter dropped the mainsheet traveller down the track only a few inches and she then tracked straight, almost steering herself.

So there is excellent directional stability. The cockpit is well aft ‘ it is not a true centre cockpit at all ‘ so you stay dry behind the screen. If you want a bit of breeze, the screen’s centre panel opens. This is a comfortable place to sail.

The 55hp Volvo Penta is one of the quietest installations we have ever experienced, and pushes the boat to around 7.5 knots. 75hp is now standard.

On a big and relatively complex boat like this you can write volumes about the design philosophy and the detailing, but we don’t have volumes of magazine space (have a look at the builder’s simple and logical website).

The HR 43 is a size you can take anywhere in great comfort. It is tempting to say again that it is traditional in concept, but that is not strictly true; it is traditional where traditional means practical or seaworthy, modern where appropriate. These are attributes which are being eroded on many production cruisers and cruiser/racers which have become essentially day-sailers, which are used at weekends, then washed and put away.

There is nothing wrong with that ‘ the industry reacts to what the buyers want ‘ but when the intended use becomes more serious, the boat too must take a more serious approach.

Hallberg-Rassy assumes the boat should have the potential to be used for more than weekend sailing.

Its boats seem somehow honest in their approach, and honesty is another old fashioned virtue, which musn’t be allowed to go out of fashion.

In this day of series building and mass production, it is good to know that the Hallberg-Rassy boat-building yard existed when boat building still meant using using wood to construct each individual boats.

The company has stayed true to the concept of sturdy craft, well-protected cockpits, high endurance and good sailing qualities with a high degree of comfort. It also builds boats with a quality that is affordable.

The company has adapted to the changing requirements of its customers, particularly the demand for better sailing qualities.

Because of its strong position in the international market, it has been able to establish a collaboration with one of the best known designers of our time, German Frers.

German Frers is particularly well known for the racing success of his designs.

However, the fact is he comes from a true boat-building family. He knows the difference between a racing and cruising yacht.

The latest Hallberg-Rassy yachts offer you the best that you can buy for the future with regard to sailing features, comfort and overall quality