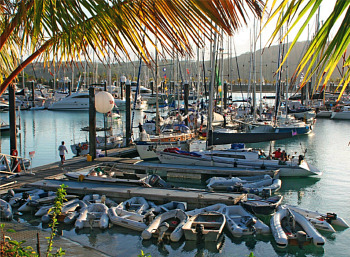 Hamilton Island hosts a full week of fun family events during Race Week. The motivations range from serious competition to the simple pleasure  of sailing in company.

If, some 25 years ago, you’d decided to join the small fleet that started what is now the Audi Hamilton island race Week, there would have been little chance of your returning the following year. Howling winds and almost constant rain made for an inaugural race Week in April 1984 that augured ill for a repeat performance and earned the fledgling regatta the unpromising soubriquet ‘Hamilton island rain Week in the Wetsundays’.

But the inescapable appeal of sailing amongst the spectacular Whitsunday islands and a swift rescheduling of the event to the more benign month of August soon had the regatta marked in many yachtsmen’s diaries as an annual must-do event, particularly among those in the southern states suffering the winter blues.

Race Week has something for everyone

Some 225 yachts created a record entry for this year’s silver Jubilee running of race Week, drawing owners and crew from all corners of the world and from every level of sailing experience to create what the island’s owner, winemaker Bob Oatley, described in samaranch-style as “a fantastic regatta—the best ever”.

Not that Bob Oatley’s personal regatta experience was quite what he might have hoped for—his 66ft Wild Oats X—the smaller sibling to his Sydney to Hobart triple winner Wild Oats XI—was beaten to the line five times out of eight races by Peter Harburg’s new Black Jack, a near sister ship and named in honour of motor racing legend Jack Brabham.

While the stripped-out racing yachts at the front of the fleet always draw spectator and media attention, the great majority of yachts at race Week are to be found in the cruising fleets—some five separate divisions in all this year—for whom the motivations for being there range from serious competition to the simple pleasure of sailing in company.

And therein perhaps, lies the secret to the growing success of this tropical sailing event—there really is something for everyone. Bob Oatley and the race Week’s principal sponsor, Audi, clearly understand that a successful regatta is one in which the whole family can participate, both on and off the water.

So, what was once mostly a bloke’s regatta with the after-racing activity focused on the bar, has turned into an all-comers event with as many shore-based attractions as a theme park.

Spot the Celebrity in Hammo

For starters, it would have been hard to walk along the busy harbourside of Front street this year without rubbing shoulders with one Australian celebrity or another. Jamie Durie and Scott Cam ensured that the Lady’s Lunch was a sell-out and Todd Woodbridge spent as much time being photographed with his trainees as he did teaching tennis in his popular coaching clinic.

Free access to bouncing castles, facepainting and fairy floss also ensured that shore- based partners were not left child-bound.

Perhaps the entertainment highlight of the week was the evening tickertape reception given to the entire olympic sailing Team, barely returned from the beijing Games and sporting their medals: two Gold and one silver. To be welcomed so wholeheartedly by their sailing fraternity was clearly as much a highlight for these high achievers as it was for their enthusiastic audience.

The name race Week has taken on new connotations for many yachtsmen since Audi has become principal sponsor. The prestige car company—which sported more than three million dollars-worth of its product in various prominent locations around the island—gives away an Avant A4 each year to the owner of the yacht that wins its sailing division, on the basis of the fastest lap time driven by one of its crew members in a midweek race contest, held in Audi R8s. Needless to say, the car racing is heavily subscribed and is held on a sailing lay day, to avoid significant absenteeism on the water.

Of course no mention of Race Week is complete without a word about the now famous Whitehaven Beach Day; what started as a major beach party for yachties has become a regional event with hundreds of party-goers transported to this magnificent crystal white sand beach for an all-day  party, described by one over-exuberant participant as being as big to Queenslanders as Melbourne Cup is to Victorians.

With so many extra-curricula activities available it is all too easy to be distracted from the action on the water, but it is here that the real business of the week is focused and the competition is as tough or as easygoing as you want it.

For the serious racers this is no midwinter jaunt, with owners settling-in brand new yachts and bedding down experienced crew for the summer season ahead. Top international tacticians are called on to help navigate the tricky tides around the islands and outwit the opposition.

Each minute saved in the long round- the-island races matters and this year the desire to shave every corner resulted in at least three yachts counting the cost of damage from a close encounter with a hidden underwater ledge on the aptly named Surprise Rock.

Bledisloe on the water

In seeking to attract more international yacht owners to the event, race Week organisers started locally this year, inviting New Zealand to send three boats to compete against three Australian yachts for the inaugural South Pacific Cup. Kiwis are to be found amongst the crew of many of the world’s most successful yachts but outside their America’s Cup record their own yachts have been absent in numbers from major international yacht racing for several years; our Trans Tasman cousins can only hope that they’ll have more luck if they come back for more next year.

Among the top cruising divisions the competition is every bit as tough—if a little slower—with as much noise from crews calling their racing rights at startlines and mark roundings as you would expect from a serious grand prix fleet. inevitably, amongst the cacophony is the occasional monologue reserved for crew members with whom the skipper is evidently less than impressed.

Such noise as can be heard from the more leisurely ends of the cruising fleet, including in the non-spinnaker divisions, seems to be generated from self- deprecating laughter at occasional hiccups at crew work or simply from the call for another drink or a bite to eat.

Many Race Week participants choose to use the various feeder races to get their yachts north in time for the regatta while others simply cruise their yachts from the southern states, with the racing being just another part of a winter-long sortie northward. The increasingly popular option for chartering a yacht locally means the return trip home is no tougher than getting on a plane.

But for some the journey is as important as the arrival and is not to be rushed; Peter Briggs was the winning skipper of that wild and wet first regatta and was clearly not put off. Twenty-five years later he gave his former winning yacht Hitchhiker a lick of paint, got his regular club racing crew to agree to a return trip, put the 41ft boat on the back of a truck and headed off for Hamilton island… from Perth!

The Whitsundays clearly have some winning ways.