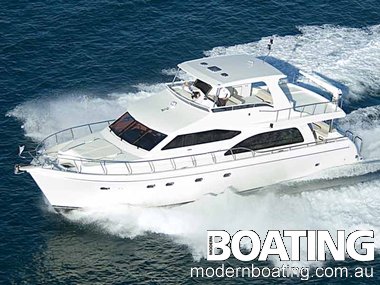 From the team that delivered Alaska, here’s a new boat with a ‘wow’ factor.

The Alaska Pilothouse and Sedan cruisers have proved a big success for Jeff and Dean Leigh-Smith. The Alaskas, built in China with a big input from the team at the Gold Coast City Marina, have hit the right spot in the market for price and value. They have arrived at the right time when the trend is for more economical cruisers that can run in displacement mode and show a turn of speed when called on.

Now the Leigh-Smiths have stepped up and introduced the Hampton 680 Pilothouse. Built in China, the pilothouse design is a real eye opener. It is one boat that has the ‘wow’ factor. It’s no wonder Dean Leigh-Smith has a bigger smile than the one he had on his face when he showed me the first Alaska 56 Pilothouse.

The Hampton Yacht Building Company is one of the first companies from Taiwan to start building in China. Jeff Chen, Chairman of the company, has been building boats for the past 20 years and his family has been building the Formosa line of yachts in Taiwan for 40 years.  “It’s the experience and expertise we are bringing to the Hampton line of fine yachts, which are designed for serious passage making,” Mr Chen told me at the Sanctuary Cove International Boat Show where the 680 made its first Australian appearance.

Hampton employs some 200 skilled workers including carpenters, designers, engineers and in-house naval architects. The company is a semi-custom yacht builder and this allows customers to input their own ideas into the layout and the woods, veneers, fabrics and materials used.

Hampton’s in-house design team has spent some years refining the pilothouse concept. The planing hull incorporates a modified deep-vee design with a high forward deadrise section for smooth entry into a head sea and flatter sections aft with reverse chines to provide an efficient planing surface.

The hull design also uses tunnels for the propellers, which lowers the shaft to a 10-degree angle and adds to the directional stability. The hull is one of the strongest on the market. It’s hand-laid with solid fibreglass and moulded in one piece with five outer layers of Vinylester resin. And if that’s not enough, it’s reinforced with two layers of Kevlar from chine to chine and three layers of Kevlar in the forward impact areas and over the running gear. On top of this the deck, deckhouse and flybridge are cored with high strength Divinycell using a vacuum bag construction process, which provides strength with less weight.

In a world of its own

That’s the start. The rest of the boat is finished just as professionally.

The main saloon is in a world of its own. It exudes class, with superb cherry wood cabinetwork that has obviously been installed by craftsmen. The layout is fairly standard for what has come to be expected of a Pilothouse cruiser, including the two freestanding armchairs. The owner can opt for built-in furniture and a personalised layout’it’s as easy as working with the in-house design team.

The u-shaped galley is separate, up from the main saloon and behind the lower helm station. The bench tops are Corian and instead of continuing the teak and holly floor from the pilothouse, the designers have finished the floor in Corian as well. Opposite the galley is a small desk with a pull-out stool underneath.

The lower helm station runs across the full width of the windscreen and has the feeling of a small ship about it. The electronic package is up to the owner, no electronics have been installed in the console, instead Furuno has supplied full-size colour images of its plotter/sounders and radars that have been placed on the console, so a new owner can see how the screens will look. It’s a good idea and something other electronics suppliers might consider.

Downstairs, the owner’s stateroom is located amidships and takes advantage of the full 18ft 2in (5.5m) beam. The cabin is fully panelled and has a warm, welcoming feeling. It’s obvious the craftsmen have been at work here, too. The cabinetwork is gloss teak with a burl finish on the bedside tabletops, the vanity table and it’s swing-out stool, and the portholes are disguised behind Japanese-style screens. The Cantaloupi reading lights either side of the mirrored bedheads add to the ambience.

Another feature is the cedar-lined walk-in wardrobe; it is more of a dressing room, it is so roomy. The burl highlights are continued in the ensuite as well, which also has an overhead mirror in the ceiling. It’s a funny feeling at first to walk into the ensuite and see your reflection above you but you soon get used to it. The shower is unusual, too. As well as the regular shower head there are five nozzles at various heights on the water inlet. I’ll leave that to your imagination.

The guest cabin is also fully panelled, as is the third cabin, which contains two Pullman-style bunks.
Access to the flybridge is either by a flight of stairs from the cockpit or an internal staircase opposite the galley. There is plenty of room up there for entertaining and instead of the usual vinyl that gets hot despite being under a hardtop, the lounges are finished in a woven fabric.

There are the usual entertainment appliances such as a fridge and barbecue as well as a flat screen TV that folds down from the hardtop.

This boat had the optional crew quarters, which are accessed through either the saloon, via a companionway well hidden in the cabinetwork, or from a door in the transom. The internal companionway leads down to a utility room with an aluminium-topped workbench. The bench is almost too good to work on. I would be reluctant to bolt an engineer’s vice onto it.

A watertight door leads into the engine room where the twin 1015hp C18 Caterpillar ACERT diesels wait for the call to fire up. The boat was also equipped with Wesmar stabilisers and 15hp bow and stern thrusters.

Out through the Southport Seaway the stabilisers did their job well, but in deeper water offshore, the boat was in its element. The Hampton 680 was a delight to drive, with the sweet spot around 20 knots. At this speed, the engines were ticking over at around 1900rpm. Dropping the engines down to 1526rpm and the boat was equally happy running along at 15 knots. Open the throttles wide and the Hampton ran up to a respectable 25.6 knots.

The underwater exhausts kept the noise at a pleasant conversation level, but they are bypassed when the engines are run at low idle when manoeuvring or coming into a berth. Then there is just a gentle burble. From the flybridge and the lower helm station the corners of the boat can’t be seen, so a third control station is positioned in the cockpit for docking. Which makes it easy if there are no helpers on the dock and only two people on board.

The value will sell you

The list of standard items that come with the boat is long and at a tad under $3 million, the Hampton 680 is well positioned in the market. It’s an emerging market for well-priced, economical, pilothouse designs that lend themselves to long-distance cruising.

Since the test was conducted, the boat has been optioned up with the new Raymarine electronics package, which will be released at the Sydney International Boat Show, and includes two C120s on the flybridge and in the pilothouse, a VHF radio, autopilot and a 72 nautical mile radar.