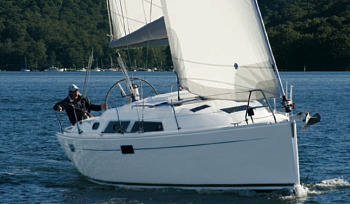 This 35 foot yacht is easy on the eyes and even easier to sail.

The boat has optional genoa tracks with adjuster lines leading back to the cockpit. Yanmar 30hps are standard on Hanse 350s. Mahogany trim (cherry is an option), with optional red upholstery chosen for impact. The angled fitting buys a fiew extra centimetres to help the anchor clear the vertical stem. The dinette and table, angled for extra space. The navigator perches on the aft end of the settee to use the table on lthe portside aft.

Hanse yachts (pronounced ‘HUN-ser’) are the easiest boats to recognise on the marina. The factory literature reckons the design theme for the current boats was set in 1999 when yacht design engineers Judel/Vrolijk & Co worked out how to make yachts with beamy sterns behave themselves when heeling to wind pressure.

But there’s more to it than that. Hanse styling (distinct from hull design) has long been ahead of its time. Influenced by the minimalism of Wally-style superyachts, Judel/Vrolijk have given the Hanses an aggressive edge.

The European market liked the Hanse look and other boatbuilders started to pick up styling cues. In time, buyers accepted the radical Hanses. Even the little Aussie battler, always wary anywhere near the cutting edge, has warmed to Hanses, which now sell very well here.

There is more to boats than styling, but in an era when women and families have a strong say in boat purchase, styling is a big part of the equation. The classic look has not disappeared but its importance has been diminished by the numbers of new buyers who have come to sailing without cultural preconceptions. And here endeth the lesson.

The Hanse 350 is a nice size. These modern hulls with beamy sterns create a lot of volume below decks so a shorter, easy-to-handle boat demands little compromise in accommodation and performance, as well as being cheaper to moor and run.

Hanse has found no reason to depart from the trademark self-tacking rig, a feature that takes all the trouble out of sailing. The mast is supported by two sets of spreaders and a shroud system featuring continuous diagonals, led down to the deck for easy adjustment. This is standard on racing yachts but rare on cruisers.

The standard sails are from the factory, built in Europe by North. The main is reefed by a single line.

The mast, tapered in sections, is mounted on deck, supported below decks by a compression post. The rigging is tied to a ring frame, which also picks up loads from the keel.

The 350’s keel profile is that of an upside-down T, a cast-iron fin and bulb fastened to the hull by stainless steel bolts through a stainless backing plate. The common objection to the T profile, where the bulb projects forward of the fin’s leading edge, is that it can snag underwater lines. But as Windcraft’s Bob Vinks says, in his years of sailing such boats it has never happened.

The designers have divided the hull into three zones—bow, midships and stern—and there are options for each, so you get more layout combinations than I can get my head around. You need to see the brochure.

The most fundamental choice is whether you want two cabins or three. Depending on your choices, the bathroom can be forward or aft.

This boat has the standard layout, which has the head forward (ensuite with the owner’s cabin) and one cabin aft, to starboard. The portside cabin aft is not fitted out, so it becomes a huge storage room, accessible via a lid in the cockpit. Peter Hrones, boss of Hanse importers Windcraft, reckons it would be easy to set up this space with a mattress and use it for both storage and to accommodate an extra body when needed. The dinette and table, angled for extra space. The navigator perches on the aft end of the settee to use the table on portside aft.

The saloon furniture is angled, which opens up the space, and the designers have omitted the usual deck-height lockers in the saloon which boosts the impression of volume—this is the saloon of a 40-footer. The timber trim can be in cherry, or mahogany (as shown on page 80). The stove is a twin-burner with oven.

When he ordered this boat, Peter wanted to use it as the company demonstrator and for club racing, so he opted for the cockpit-mounted mainsheet traveller (instead of the coachroof position for the standard boat) for the superior control over mainsail shape and easy handling—the traveller controls are right in front of the helmsman. A coachroof-mounted traveller leaves the cockpit clear.

The boat also had the optional genoa tracks with adjuster lines led back to the cockpit to control the shape of the genoas (sails which reach aft of the mast). The genoas provide the extra sail area for racing that the self-tacking jib can’t provide, though the 350’s performance calculations confirm Hanse folklore which says that above 12 knots of breeze the small-headsail rig is not disadvantaged.

Years ago Peter decided he would make standard features on Aussie boats the features Aussies usually request. So the 350s will have as standard the 30hp Yanmar and Saildrive.

As with all Hanses, the self-tacking jib helps define the boat’s character. Social sailors who may be put off by the busy-ness of tacking headsails will be astounded by the way this boat handles under sail.

To change direction, when tacking upwind the skipper puts over the helm, both sails change tack and away you go—the occupants of the cockpit need never be disturbed. The self-tacker introduces some of the calm for which sailing should be renowned but often does not deliver.

At a time when many builders are reverting to wire and quadrant steering the Hanse rack and pinion system is a revelation. It is light and it is precise. Sailing this fast cruiser (or cruiser/racer) to windward delivers the tactile pleasure of a grand prix racer. The steering is so responsive I found, on first acquaintance, it was easy to over-steer until I relaxed and let her find her own way. The system would easily handle the optional larger-diameter wheel without losing its razor edge.

There is nothing quite like the Hanses. The company defined its market early in its career and hasn’t deviated. I found little to fault with this 350. In size the cabins are what you would expect on a 35-footer but the all-important entertaining area—the saloon—is huge. And the beam aft gives cockpit space.

She is affordable and easy for small crews to handle. The golden rule is that the smaller the boat the more responsive it is to sail.

She doesn’t have a huge sail area but she is so responsive to handle that it doesn’t matter. A great illustration is watching Peter, while under sail on a very light day, repeatedly spin the boat in its own length and point it in any direction without touching a line while the sails take care of themselves.

The sheer ease of sailing this boat will win over non-believers, including powerboat people who think that sailing is an unnecessarily complex black art. It ain’t necessarily so.