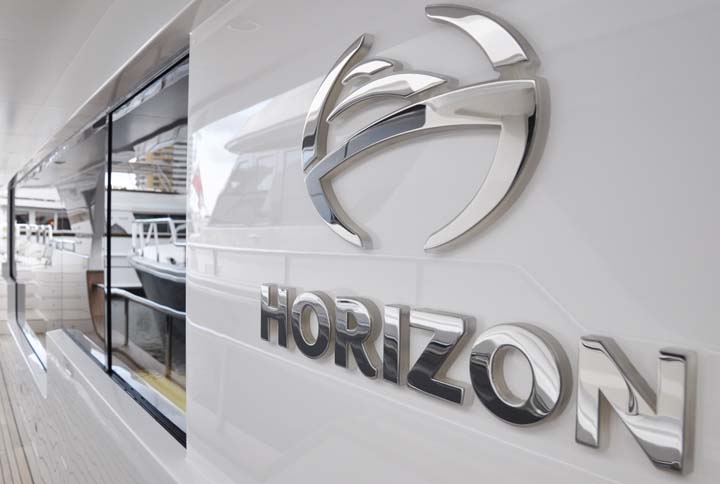 When you walk away from a boat like this Horizon – and you have little choice but to walk away unless you’ve left a cheque for $5.5 million or so behind – it takes a while to get all the impressions into perspective.

A boat of this size and nature is a complex thing. It must be a five-star hotel that pampers its occupants, but it must also continue to pamper those occupants as it puts to sea, even as it crosses oceans, and that’s the difficult bit. It takes a lot of time, and considerable rumination, to consider how well designer and builder have succeeded in reconciling these disparate factors.

We had an unusually satisfying run in the Horizon 80, because a big breeze and a nasty short sea gave us a tough little test of sea-keeping qualities. The gloss and glamour of this vessel is evident from the photographs, but the performance also made a strong impression on the team.

Top speed is a claimed 26.5 knots, not astronomical in the superyacht world – other boats in this category will give a knot or two more – but what is surprising is the way the Horizon 80 achieves its speed. At idle, the twin 1300hp MAN V12s fire on only half their cylinders to reduce noise and fuel consumption, so when you’re just loafing along there’s not a lot of activity in the engine room.

But when Captain Kenny hits the throttles, several things happen at once. The six-cylinder engines become 12-cylinder engines and the turbos, which have also been having a bit of a holiday, go to work. There’s a distant rumble beneath the floor and the hull charges ahead and suddenly we have 25 knots on the clock.

The semi-displacement hull must have lifted, as all spray is now thrown down and away, but there has been no perceptible change in attitude and in this nasty little sea there is no need to worry about spilling your drink. When Ken Cougan and son David decided to get into the megayacht business they did a lot of homework. After a world search they settled on the Horizon line, built in Taiwan by Kha Shing, but they insisted on a few changes.

The boat had to be Australianised – the canopy had to be added, for instance, because the Europeans demand all the sun they can get. And the Cougans decided to have the boat built in survey. This was a big ask. David Cougan spent two and a half years doing even more homework, but now the Horizons destined for Australia are built to DNV (Det Norske Veritas) standards, which demand features like watertight doors, twin fire hoses, a CO2 system in the engine room and minimum prop-shaft size. All drawings go to Norway for approval and the boat is inspected during construction and when completed.

The boats also conform to USL (Uniform Shipping Laws), the Australian Survey Standard. Hull and superstructure are made from fibreglass. This Horizon 80 is thus a truly international affair. The naval architect is Swedish, the external styling is Italian classical and Aussies have had a fair bit of input.

The Horizon is a sort of semi-stock boat, in that hull and superstructure can’t change (though you can have side-decks if required). “Virtually everything between the bulkheads can be customised”, said David Cougan. Horizon offer a delivery time of 12 months; a short time by superyacht standards.

The boat shown here has a wide body – side-decks were eliminated in the interests of liberating interior space. The driving station is part of the main saloon – some owners will prefer to separate them. All sleeping cabins are on the bottom deck – there are four berths aft, in two cabins, one cabin for the crew of two and one for lesser-favoured guests – perhaps that’s where you put the relatives.

Eight people can sleep in four cabins in the forward half of the hull, on the bottom deck. The master stateroom is foremost and spreads across the full width of the hull.

The second driving station is on the top deck, where you will also find the barbecue (more like a full galley), dining area and lounging space. On the after section of this deck the tender is stowed.

Saloon styling is Euro-classy with a touch of retro – extremely glossy cherrywood, fabric headliner, a lot of bevelled glass.

In Sandringham, on Moreton Bay, the Horizon is tied to a dock space that’s no longer than the boat. The breeze is blowing on the beam from the land, so Captain Kenny orders the lines dropped and we drift slowly off the dock. We roll silently onto the bay to discover 25 knots of breeze and, in the shallow, muddy water where the bottom has been stirred up; we find 1.5m seas with vertical faces travelling only a few metres apart – nasty. It occurs to me that an auxiliary yacht would not be able to motor or sail offshore in these conditions – the steepness of the waves would stop it dead.

Captain Kenny retreats from the top deck steering position to the lower position as it is going to get unpleasant outside. Punching slowly into this evil chop the Horizon is forced to cop a lot of white water. The only solution is speed – Captain Kenny pushes open the throttles and the big hull lifts to the task, the spray stops immediately and the hull deals easily with the situation. On the VHF we hear someone is in trouble; the 12m Coast Guard cat eases past, treading gingerly in difficult conditions.

Captain Kenny gives the throttles a heave and this big boat (or small ship, depending on your point of view) charges up to somewhere near its maximum speed.

We ease off and it is happy at any speed; we throttle back to 18-20 knots and everyone is happy. With more than 20m of water under the keel the seas stretch out and become less steep, though still substantial. We run the Horizon parallel with the seas – the stabilisers hold her steady.

As a test, Captain Kenny switches off the stabilisers. The hull obviously has good form stability as the difference is initially small, but after a while the oscillations build and it seems the stabilisers cut down the momentum of the roll so the motion is not allowed to build or increase.

We head for home. It has been a good day. Weather like this is invaluable because handling vices are revealed instantly. The stiff breeze is still blowing directly off the dock. With a craft like this you don’t toss the fenders over the side and ricochet in, like the eight ball off the back cushion. Captain Kenny eases the Horizon alongside, using the bow thruster until the bowline is secure, then the stern thruster does its work and we are snug.

A boat of this type comprises about a million details – come to think of it perhaps there are literally a million details. When you descend the stairs to the lower level, lights switch on automatically. The watertight door in the lower corridor is hidden behind the full-height timber panelling. There’s a vacuum-cleaning system throughout. The mattresses are suspended on arched springs, which keep the mattress clear of the bed base, making sure they are constantly aired.

There are plenty of big details to consider when shopping for boats of this class, big details like generators and electronics and navaids. But it is the small details that convince a buyer of the builder’s integrity, and one thing people with the money to buy boats like this have in common is obsession with detail.

The Horizon 80 seems to me to offer a good hull, which can be fitted out with a near-custom interior at a price, which is more than competitive with others of its type.