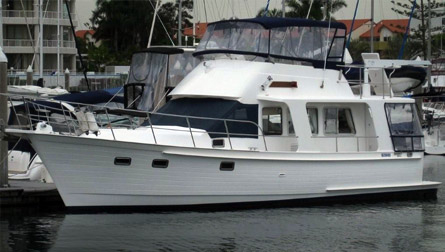 Tradition Lives On. She looks like a timeless classic, but she won’t cost you a fortune to run.

The traditional lines of the Integrity 426ES give this vessel timeless appeal. And there is no doubt the Modern Boating team has a soft spot for midsize displacement boats. Why ? Because they offer all the pleasures of cruising in a package with low running costs.

The Integrity 426ES is hybrid grown from the original Integrity 40 footer. The decision to extend the waterline length by stretching the hull to the end of the swim platform increases the boat’s speed and stability and creates one extremely solid swim platform.

Noel Nicholson from Integrity Motor Yachts Australia, explains the waterline extension has improved vessel performance and now there is the option to order a 426 with a cockpit that uses the extra space on the swim platform, further boosting outdoor living.

PERFORMANCE
For this test we took the 426 down Sydney’s Pittwater before heading off shore on a peaceful spring afternoon. The boat displayed all the traits of a well-balanced displacement cruiser, plus she had very low engine noise.

When hit by uneven seas, the Integrity 496 had a modest roll and it took little time for her to settle down and get back on course. The hull responded well to trim tab adjustments and once trimmed, she hit a top speed of 16 knots.

The Integrity 426 is powered by twin 210hp Cummins diesels, which produce a cruise speed of 10 knots at 2000rpm and a fast cruise around 14 knots. With rated fuel consumption of 22lt per hour at 2000rpm and a 1900lt fuel capacity, the Integrity has a range more than 400 nautical miles. The engines are economical at around 1500rpm, where the range at around 8.5 knots would jump to more than 600 nautical miles.

LAYOUT
The upper helm has all the necessary engine instrumentation, bow thruster control and trim tab controls, plus a handsome stainless steel wheel. The instruments are covered by a protective lid and should endure the test of time at sea.

The bimini-covered flybridge has good visibility and an appealing seating layout. The captain’s chair is at the front of the bridge deck. There’s also an L-shaped lounge and table with another lounge opposite, which combine to produce a social layout.

Behind the helm there’s another aft facing bench seat and plenty of open space where a tender can sit. The main helm, which is in the saloon, repeats most of the instruments up on the flybridge. It maintains the central electrical controls.

The bow features some solid ground tackle and is easy to get to via wide covered walkways around the cabin. Once forward the high bowrail adds security.

The vessel’s interior layout consists of a forward cabin with an island bed with plenty of room around each side. This cabin is also flooded with plenty of natural light from the portholes and deck hatches. And it features plenty of personal storage areas plus an ample wardrobe.

The guest cabin is located on the portside, which also boasts plenty of natural light and halogen spots for reading. The head has an electric toilet, more natural light from portholes and a large sit down/stand up shower finished with tiles.

The teak-lined saloon is finished with real leather upholstery. The layout is standard for this style of craft with a settee on the portside aft and a lounge on the starboard side. In fact, ‘traditional’ and ‘proven’ describe the vessel perfectly, as this layout is found on vessels built more than 30 years ago.

The galley is large for a craft of this size and steals extra stowage and bench space by fitting a set of drawers forward. It features a hotplate, stainless steel sink, Corian bench tops and a microwave. There’s a good view from the galley, so someone will always be happy to go and put the kettle on.

Opposite the galley is the lower helm, which has a door leading to wide, covered walkways that give access all around the boat. The cockpit has a solid transom door with a lip to keep the sea out.

All the stainless steel fittings are solid and the wrap-around grab rails provide additional security for the less nimble.

The covered cockpit has lots of underfloor storage and is large enough to stow the outdoor dining table in. The stairs up to the flybridge do impede this area, but the easy access topside is welcome on this type of craft .

OVERALL
Some of the stand out features on the 426 include the spacious flat bow area, loads of natural light below decks, plenty of stainless steel rails and fittings, traditional styling, wide stairs to the flybridge and wide walkways around the main cabin.

The Integrity 426ES has a base price of $550,000, but the Platinum version as tested, fitted with a bow thruster, larger 7Kva generator, plus teak deck and leather upholstery costs $580,000.

This Chinese-built Integrity 426ES is a pretty boat with a great price tag that should make her a popular choice with buyers looking for a mid-range displacement cruiser.

And with fuel consumption as low as 25lt per hour, keeping her out on the water will be a pleasure!

THE STORY SO FAR
The Shenzhen Jianghua Marine & Engineering Co Ltd was founded in 1981, and was the first company to manufacture yachts, passenger ferries and speedboats in China. It is also the
largest manufacturer and exporter of fibreglass commercial boats and luxury yachts in China.

Shenzhen Jianghua Marine uses advanced technologies, skilled workers and strict quality control to produce high quality boats. The company enjoys a strong reputation in the yacht world and has won the respect of many international customers.

The boats it builds include Integrity Yachts, Integrity Ferries and the Integrity Speedboat.

ENGINE ROOM
The Integrity 426ES cruiser was powered by a pair of 210hp Cummins diesels.

PERFORMANCE
The twin Cummins 210hp diesels produced the following figures on the team’s handheld GPS and the boat’s log: