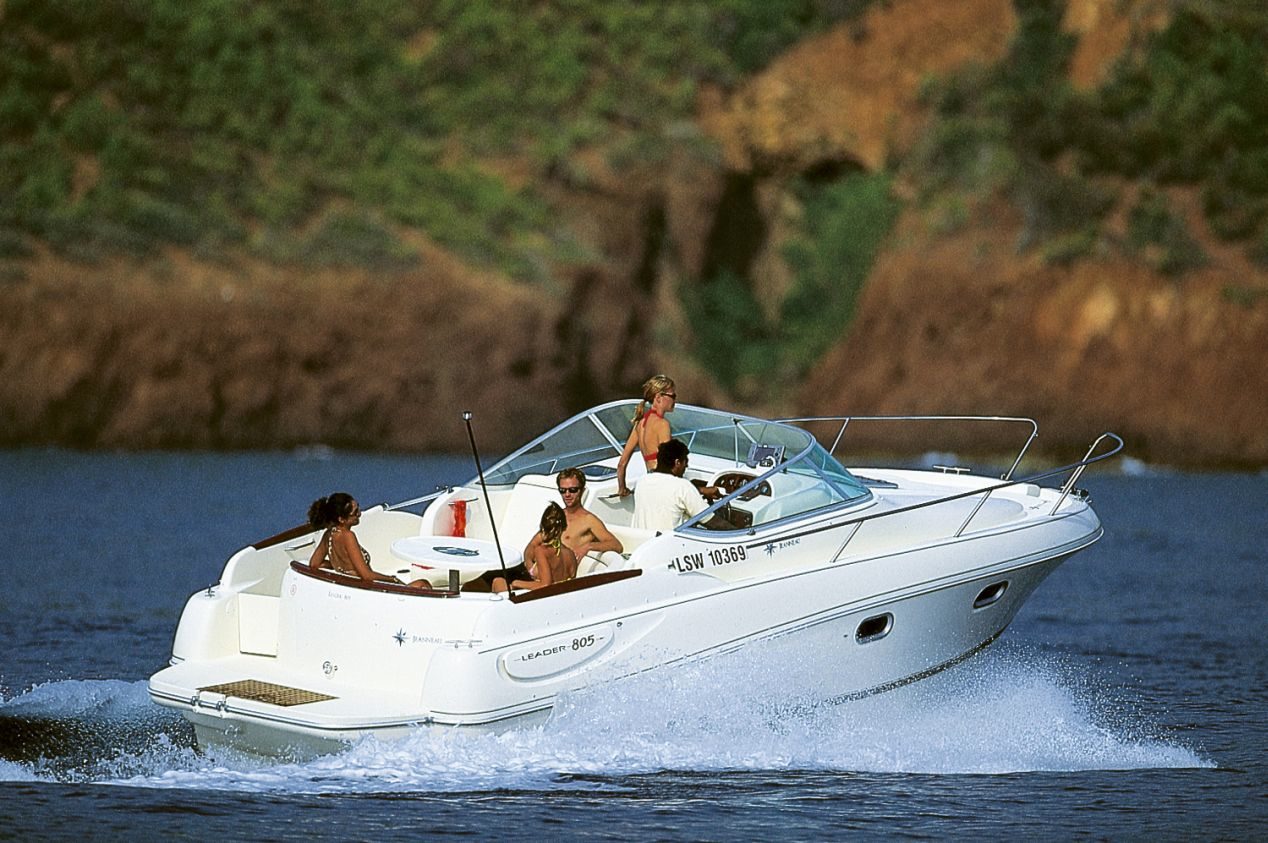 LEADER OF THE PACK. This French newcomer turns heads wherever she goes.

Jeanneau yachts have been imported into Australia for a while now, but Jeanneau powerboats are relative newcomers. But new or not, there’s no denying these boats turn heads wherever they go.

This French boat builder crafted its first wooden dinghy in 1957, before starting to use fibreglass in 1960, and now Kevlar for added strength. Over the years the company has accumulated considerable technical expertise and has consistently participated in many premier racing events.

Few could argue that the 27 boats in its model range are not elegant. For French boats they have a distinctively Italian look about them. But a quick glance at these photographs will confirm the Jeanneau Leader 805 cruiser upholds this ‘elegant’ family trait.

I have always believed that what you see is what you get. If the quality of the components used, and the workmanship that has gone into building a vessel, are clearly evident when I first step onboard a new boat, I will bet that the same effort will have been put into the boat’s hull design and mechanicals. And I haven’t been wrong yet.

The stylish lines of the Leader 805 gave me a positive first impression, but a closer look confirmed just how good the design and layout of this boat is.

LAYOUT
Jeanneau have crammed a lot into this 25-foot hull, but it works and the boat is surprisingly uncluttered. A removable table, surrounded by a plush U-shaped lounge, is the centerpiece of the aft cockpit. The lounge can seat up to six people comfortably. An infill cushion is used to replace the table with a sun pad, so a couple can stretch out in luxury and work on their tans.

There’s a wide passageway on the portside of the cockpit, so people moving through the cockpit and out onto the marlin board for a swim don’t have to step over any prone bodies.

Adjustable sports steering wheel, full instrumentation and a comfy dual helm seat means the skipper remains comfortable and can join in the conversation at any time.

The navigator/observer gets a rear-facing lounge to stretch out on and there’s plenty of strategically placed grab rails to hang onto when the driver puts the hammer down and starts throwing the Gs around.

I’m not a great fan of tinted windscreens, (they achieve little and reduce vision at night), but the Jeanneau’s curved glass screen is set at the right height and deflects the slipstream perfectly.

Getting up to the bow quickly is easy on this boat, because of the wide walkway on the portside of the cabin. The cabin is actually set to the right to allow this, but there’s no access on the starboard side.

Poke your head below deck and get set for another surprise, as even though there’s plenty of usable space in the cockpit, the saloon doesn’t suffer for it.

A large hatch in the centre of the roof floods the saloon with natural light and the portholes are big enough and at the right height for those in the saloon to see out.

The removable wooden table forms a dinette with the forward vee-berth. This converts into a double bed that’s large enough for a couple to sleep comfortably on. This boat is just the right size for a couple to spend a weekend on.

There’s a second sleeping area under the helm station floor for the kids to curl up in. The headroom’s a bit low, but it’s not at all claustrophobic.

The galley is on the portside. It’s compact, has a two-burner stove and a microwave. It lacks a bit of bench space, but its close proximity to the table makes the galley functional.

Like most French, and German boats for that matter, the 805 is finished with fairly dark timber. This, coupled with the dark green upholstery, can make the saloon seem smaller than it actually is. I feel lighter timber and upholstery is the go.

On the other hand, the shower/toilet is surprisingly roomy. It features a VacuFlush toilet, a sink and vanity unit. The tap unit also pulls out to become the showerhead.

There is a transom shower to hose the salt and sand off after a swim, so it doesn’t get tramped all through the boat.

PERFORMANCE
Out on the water, the boat is easy to drive and responds well to both helm and throttle. The sterndrive leg controls trim. With the bow up slightly, she easily carves through chop and other boat’s wakes.

The Leader 805’s aggressive chines deliver a soft ride on the air that is trapped between the outer edge of each chine and the keel. It’s also a dry ride.

Even after throwing the boat through a few full-on turns we didn’t get a drop of water on the screen, nor was any spray sucked into the aft cockpit.

The Leader 805 was powered by a 320hp, 5.7lt, V8 Volvo Gxi petrol engine, giving her a top speed of 32 knots. She cruised along effortlessly at 25 knots, which would be a fuel-efficient speed if you wished to do some long range cruising up the likes of the Hawkesbury River.

OVERALL
The Jeanneau Leader 805 is a pretty and stylish boat with lovely curved lines that please the eye, but she’s also capable of a good turn of speed. The 5.7lt V8 Volvo is a good match for the hull and while she’s no race boat, a top speed of 32 knots is nothing to be sneezed at.

She’s built using quality fixtures and fittings, her designers have made very good use of all available space and her fit-out makes her a great weekender for a couple.

ISO CERTIFICATION
The results of many years of experience and research are proven by the numerous patents belonging to Jeanneau, demonstrating the ongoing and consistent capacity for innovation held by each member of the Jeanneau team.

Thanks to these technological accomplishments, to the construction methods, to the careful attention to detail during production, and to rigorous controls, the reliability of its boats have become world-renowned.

PERFORMANCE
With two adults onboard the Leader 805 had a top speed of 32 knots and cruised comfortably at 25 knots.