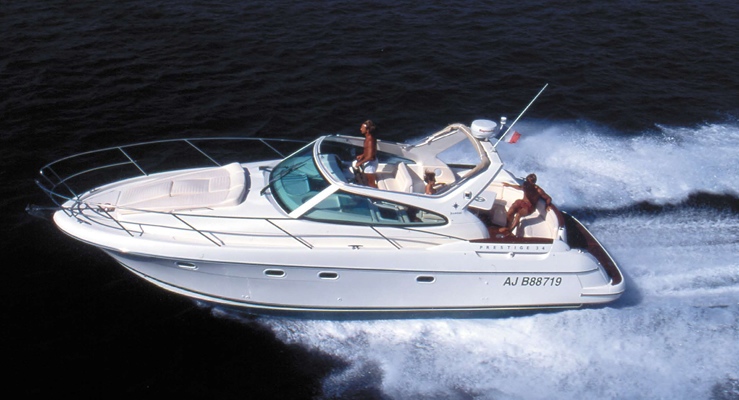 Working Girl. Even with 550 engine hours under her belt she can still turn heads.

The fact that this test boat has already run up 550 engine hours (the result of more than 140 charters for the Leisure Boating Club at Rose Bay in Sydney) is a true testament to this vessel’s durability and longevity. Apart from a loose hinge in the galley and the odd scuff mark (easily polished off with a bit of fibreglass polish and elbow grease) the boat still looks pretty good.

In the last 12 months she really has done the hard yards. 550 engine hours equates to 69 days with the engines running for eight hours a day, or more realistically around 140 days running the motors for four hours per day. And how many boaters clock up three months a year on the water ? Not many we reckon, which is probably why operations like the Leisure Boating Club are becoming so popular. You get to use the boat when you need it, but don’t have to fork out the almost $400,000 price tag up front. Not to mention coughing up around $16,000 per year in berth fees and another grand to clean her bum each year.

A HISTORY OF STRENGTH
Jeanneau built its first wooden dinghy in 1957, before moving to fibreglass in 1960. Since then, Jeanneau has accumulated considerable technical expertise. Thanks to these technological accomplishments, from construction methods to the careful attention to detail during production and to rigorous quality controls, the reliability of its boats has become world renowned.

The strength of Jeanneau boats is well documented and safety is a fundamental consideration. This is illustrated by the traditional methods of hull lamination, where the bulkheads (structurally reinforced) and the wooden stringers and cross-frames are bonded directly underneath the entire surface, or around the full perimeter. The hulls are laminated by hand, moulded internally, or by injection using the Prisma Process.

The wood furnishings on all Jeanneau boats are produced with great accuracy thanks to the capabilities of a computer controlled carpenter that cuts and mills wood to within a 10th of a millimetre accuracy. Building with wood is a tradition among the Jeanneau workers. The factory even supervises the drying of the logs used in its boat’s construction and the solid wood furnishings and the veneer trim pieces, are finished by hand.

PERFORMANCE & HANDLING
Powered by twin Volvo D4 260hp sterndrives the PR34 is no slouch in the speed stakes topping out at 36 knots at 3900rpm. The steering is light and responsive, enabling this 34-footer to put in sportboat-like performance. She turns almost within her own length and accelerates quickly to wide open throttle.

The PR34 is another hull that capitalises on wide, down-turned chines carried well forward and a sharp bow entry. This combination delivers a soft , dry and extremely stable ride, which is another reason why this hull is an excellent choice for the self-drive charter market.

Although there was a southerly buster heading up the coast, during this test the seas were calm and the team had to rely on jumping the metre-high wakes, thrown up by the Sydney Ferries, to assess the boat’s rough water capabilities. This vessel didn’t bang and crash, or generate much running noise through her hull.

The boat has a dry weight of 6000kg. Add another 1000kg for fuel and freshwater and 700kg for passengers and crew (the boat sleeps four adults) with all their gear and her total weight is more like 8500-9000kg.

LAYOUT
For a 34-footer she has plenty of room below decks. Her layout is relatively straightforward. There’s an amidships double bed for the children or guests and a forward stateroom with an island bed in the bow. The full functional galley is on the starboard side with a dinette to port.

There’s only one head onboard and while it’s a little squeezy, the average person won’t have any trouble using it. The main saloon and staterooms feature darker than normal timbers and a solid door partitions off each area. The flat screen TV for the main saloon and forward cabin is mounted on the folding forward cabin door. So, you either watch it in the saloon with the door closed, or leave the door open to watch it from the forward stateroom. Still on the doors, they feature metal catches that grasp plastic tongues to hold them open. In time these will deteriorate and snap off and should be replaced by metal ones.

The helm station and aft cockpit are designed for entertaining and have seating for up to 10 adults. There’s a dual skipper’s seat with a small L-shaped lounge to port. In the aft cockpit is a large transom lounge that wraps around up behind the skipper’s seat to form a ‘U’ around a removable table. With the table removed, this lounge converts into a big double sun pad, or with the covers in place, a berth for two, which increases sleeping capacity to six.

Full instrumentation is standard and the test boat featured a hardtop with an electrically operated, opening sunroof. A soft -top version is available, which would give the skipper better all-round vision when underway, because the supports for the hardtop do impede vision and you need to watch the ‘black spots’.

The main cabin is positioned slightly off centre, which allows a wider than normal walkway on the port side for easier accessing the bow. The bowrail is high and sturdy and offers good security to anyone needing to venture forward to the bow.

OVERALL
This test boat has already put in plenty of sea time and comes through with flying colours. She’s comes as a complete package, but can still boast an impressive list of options for those wishing for the finer things of life such as air-conditioning, bow thruster, genset, or the bigger Volvo D6370hp engines.

As tested the Jeanneau Prestise 34 had a price tag of $396,335, which included an impressive electronics’ package.

EUROYACHTS EXPANDS
Euroyachts is one of Australia’s largest importers of European yachts. For more than eight years Euroyachts has expanded its marketing and distribution in Australia to include many fine products from the UK, France and now the USA. The Australian Boat market has matured to the point where consumers demand access to the best products available in the world and Euroyachts has been at the forefront of introducing quality vessels.

PERFORMANCE
With three adults onboard the PR34 produced the following performance figures.