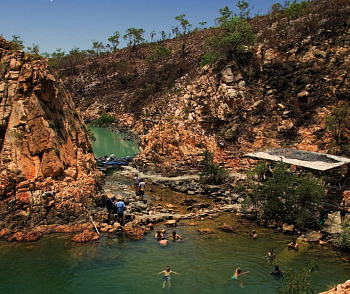 An increasing number of privately owned boats, both trailerboats and otherwise, are enjoying the Kimberley experience. However, it is no exaggeration that the Kimberley region is wild and remote—most parts of it certainly are! That means preparation, organisation and appropriate education (homework/knowledge) for any trip you plan on your own behalf (without established charter operators) is essential.

Travelling with other vessels increases the safety level and is advised where possible. Also, keep in mind that it’s often necessary to pre-arrange food, fuel and water top-up points. Long-range communication electronics and regular contact with an established safety monitoring organisation is also a very wise move.

Yes, it requires a lot of preparation, but the rewards are well worth it: the trip of a lifetime!

There is a savage beauty to the Kimberley (north-west WA). Isolated and almost impenetrable during the monsoonal seasons, the Kimberley has suffered little industrial development. These mostly pristine expanses offer a glimpse into an untamed world that has escaped rapacious modernisation.

I recently explored the lower third of the Kimberley by charter boat and was left deeply moved by the look and feel of this timeless place. Leaving the drab clutter of urban life behind I ventured into a forgotten land, one gouged into a rugged landscape by massive 14m tides, blasted by cyclones and drenched in monsoonal rains. Wallabies, ghost bats and purple- crowned wrens are just some of the creatures that were going about their daily routines, as they have since the beginning of time. This is the real world, a place anyone with a passion for life should experience at least once.

The following journal offers but a tiny glimpse into the magnificent Kimberley region.

Daybreak in Broome saw the day’s first golden rays draw brilliant halos around the bulbous boab trees and warm the heavy helmets of the life-sized statues of pearl divers. The dirt glowed red against the turquoise shallows of Roebuck Bay.

Around midafternoon we were ferried across the luminous waters to the sturdy 20m custom-built catamaran that would be our home for the next five days. We weighed anchor, put Broome at our backs and, with the sinking sun on our port side, steamed north into the beckoning wilds of the Kimberley coast.

We pushed on all night in an effort to put as many nautical miles as possible betweeus and Broome. But 13m tides pushing out from the massive estuarine expanse known as King Sound slowed our progress. In the meantime, we soaked up the unique seascape created by the morning light kissing the lower lying islands in the Buccaneer Archipelago. Their light brown ragged tops sharply delineated by the dark intertidal zone made for more of a moonscape look than a seascape.

By midmorning we reached a little inlet south of Koolan Island. Dories were despatched and we motored up the short creek—clear blue water hemmed in by towering faces of rock. Drifting with the tide and casting lures met with a barrage of stripey sea perch and copper-coloured mangrove jack. To our surprise we caught prized reef fish such ascoral trout and tuskfish well up the creek.

After a bite to eat on the mothership, we shot up nearby Crocodile Creek in tenders. It was the top of the tide, the only time we could access the picture perfect freshwater cascade and swimming hole. Crisp clean water spilled over a rock ledge, forming the ideal natural pool. Small native rainbowfish darted about us as we frolicked in the water and escaped the Kimberley heat.

In the soft afternoon light we navigated the big vessel through the spectacular narrow passage between Koolan Island and the mainland. From there we headed across the mouth of the famous Talbot Bay and onto Collier Bay, where we slipped the big cat up Leadline Creek to a protected anchorage for the night.

The morning light was tinged orange by the low-lying bushfire smoke—common in the late dry season. At times the smoke can be so thick that the entire day is twilight. The crew’s local knowledge offered rewards when they guided us up an offshoot of the main creek with the rising tide. A short walk over the ancient landscape delivered a pretty little waterhole that held vast numbers ofcherabin and brightly coloured rainbowfish.While we were all revelling in the cool clear waters an intricately marked Merten’s water monitor sat unperturbed at the baseof a small waterfall as if guarding this oasis.

We pushed further north across a glassy sea as the orange fireball slipped away into the Indian Ocean. In the last light of day we anchored in the eerie shadow of a spectacular rocky massif.

Guardians of the Kimberley

We awoke to the glowing orange cliffs of Raft Point. These towering monoliths give the air of harbouring something profoundly important—and that they did. We motored the tenders to a small beach and went ashore. Boab trees shaped like distended port bottles greeted us at the base of the cliffs.

The narrow goat track was almost indiscernible, but once located led us to a series of dominating overhangs. Sliding into the shade of these open caves, we were engrossed by a spellbinding gallery of Aboriginal Wandjina spirits. They are guardians of this land and its past and present indigenous people. It is a symbol still used in its traditional context to bring fertility, rain and wealth to country in the Kimberley region.

With Wandjina figures still burning in our memories we explored further along the coastline and into the intricate web of islands and estuaries that make up Doubtful Bay. Well inside a picturesque creek we experienced an amazing tidal rockbar that changed from a saltwater waterfall falling toward the mouth of the system, to one falling in the opposite direction, within a matter of just two hours! At times, the water level on either side of this rocky bottleneck varied in height by a couple of metres. It is indeed an ever and fast changing land that can catch the unwary andtrap them in the piercing heat.

The rockbar displayed another side to its moods byyielding a couple of lovely silver saltwater barramundi—providing a tremendous feast that evening.

We cruised from Doubtful Bay and the wild rivers and creeks of the so-called ‘Three Ways River System’ deeper into the Kimberley. We pulled inside a large estuary by the title of Red Cone Inlet during the flooding tide late in the afternoon. The big tide allowed us easy access in the tenders to a spectacular swimming hole and waterfall known as Ruby Falls. A refreshing swim was followed by a climb above the falls to a pretty smaller set of falls and a rock-lined billabong skirted in waterlilies and alive with pretty little rainbowfish.

The late afternoon sun allowed the few of us who made the climb a magical and personal period of reflection. This special place calmed the soul and forced a natural meditative state of contentment. Such is the spell of much of the Kimberley—if you allow its true spirit into your heart.

Day of the Barramundi

One small creek inside Red Cone harboured a huge fallen tree that was almost fully submerged except for the very top portions of dead branches. We anchored 20m or so upcurrent from the snag pile and drifted a mix of unweighted and lightly weighted live mullet back toward the tangle of timber. The action was almost instantaneous. And for the next hour or two we enjoyed a succession of missed hits, hook-ups and numerous landings of feisty chrome-plated saltwater barra from 65-80cm.

In the dead calm conditions these healthy salties jumped and gyrated around the boat, often in double and even triple hook-ups. Only when we ran out of live baits did the bite slow.

Among the barra were quite a few speedy blue salmon, but they were unpopular with us for stealing valuable live baits. It was an explosive, highly memorable session.

This area was loaded with crocodiles, and they had no fear of boat or man. They virtually nosed our tenders with interest and chewed on the floats that marked our crab traps. These tough ancient reptiles are truly at home in this cruel but beautiful environment.

After lunch we opted for another refreshing swim at Ruby Falls before using the high tide to exit the system and travel the entire night back to Yampi Sound.

I drifted to sleep lulled by the low drone of the motors as the vessel pushed back towards home. We woke to the impressively white sands of Silicon Beach. A refreshing and safe swim was enjoyed in the clear shallows. I walked the rocky escarpment adjacent to the beach for a better photographic vantage point and was rewarded for my extra effort by some of the most impressive grevilleas and banksias that I have ever seen—all in full bloom!

This perch gave an overwhelming perspective of the Kimberley—its vastness all around, yet at your feet the intricate beauty of its rocky formation and the breathtaking and diverse flora and fauna. There is nowhere else on earth even remotely like the Kimberley!

We steamed out to the island labyrinth that is the Buccaneer Archipelago and anchored amongst a small group of low lying islands that we explored in the dories. Shallow reefs surrounded the islands, the colourful corals painting a perfect scene. We trolled and cast lures across the placid waters. Huge trevally followed our offerings, but refused to eat. A little later a large fish pulled volumes of line off my reel in sustained runs. eventually a massive barracuda with teeth like tombstones came boat-side and was photographed and released.

We anchored over a submerged coral outcrop and fished with bait for a range of pretty reef fish. They would be the last sweet tasting meal offered by Kimberley waters as we turned the big vessel’s bow south for the big run back to Broome.

This Kimberley adventure was almost over. A silence fell as we began contemplating our next one.