Kooringal Experience Fun for Young and Young at Heart 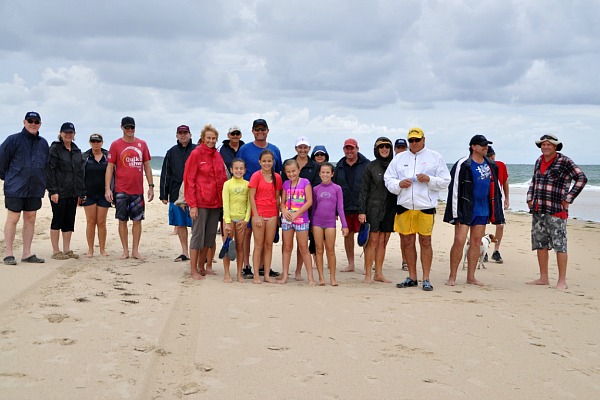 KOORINGAL, QLD, AUSTRALIA: As nine month old baby Kristy Bielenberg sat perched in her high chair in the cockpit of her parent’s 47 Flybridge, it was clear that this was going to be an experience to remember for the whole family.

Her parents, Scott and Raelee, took delivery of their 47 in July of last year, and whilst this was their second Riviera, this was their first R Marine Jones Experience. It was also the first time they had taken their new boat to Kooringal.

Joining 22 other Rivieras ranging in size from 40 feet to 56 feet, Scott, Raelee and their four daughters, Bianca (12), Emily (10), Jaimee (3), and Kristy (9 months), met Randall and the R Marine Jones team at the southern end of Moreton Island before venturing up the channel to Kooringal.

Listed on the Australian Heritage Register, Moreton Island is located 35 kilometres off the coast of Brisbane and is renowned for its crystal clear water, white sandy beaches, and marine life such as green turtles, humpback whales and dugongs.

The annual experience is usually held on the Australia Day long weekend at the end of January but the day before scheduled departure, R Marine Jones dealer principal, Randall Jones, decided to postpone the Experience.

“At first, I thought it was the wrong decision, especially given the number of people who had been waiting for this event to come around,” Randall said.

“After losing sleep about postponing our first event in 11 years, I woke up to hear the weather report and soon realised it was the right decision.”

For Scott and Raelee, it was an amazing experience, and one that the whole family enjoyed.

“We wanted to catch up with other Riviera owners and meet some new friends who we could go out boating with,” he said.

“We met a couple of families who had young children too, and all the kids had a great time together.

“The poor weather didn’t disappoint. Jaimee (3) had a ball, she was into everything helping dad and Bianca drive the boat while Emily was wakeboarding behind.

“Kristy, our nine month old baby had a great time as well. We bought along her portable high chair which we clamped onto the cockpit table and she was the centre of attention with all the ladies making a fuss over her.

“For me, the highlight of the trip was getting together on the beach for fresh prawns and oysters.

“It was a great cruise to Kooringal and Randall went to a lot of effort to mark out the course to ensure we didn’t run aground.

“We had a fantastic weekend away and it was nice to meet the other Riviera owners.”

Randall said the 60 nautical mile round trip from the Gold Coast to Moreton Island was one of the most popular experiences on the R Marine Jones calendar of events.

“Once we reached the entrance to Kooringal, Sharm, on board Riv1 led the fleet through the narrow channel dropping marker buoys so the group had the best track in. This entry can be challenging,” Randall said.

“The weather was overcast at times, but all in all, the group enjoyed our favourite experience.

“We organised a social night for owners to get to know each other with king prawns, freshly shucked oysters, and Thai style hot food at the Gutter Bar, which is one of our favourite watering holes. We had a great meal and enjoyed a few drinks.

“The next morning we organised a walk around the Spit of Moreton, and the timing was right on cue for a big down pour, but that didn’t deter our keen walkers. As the weather improved, we guided the group in their own tenders to the local shallows where there is always plenty of marine life to see under the water including, sting rays, shovel nose sharks, and turtles.

“That afternoon our expert fisherman and on site service support Sharm Brown caught 17 squid, which made for a nice feed of calamari cooked on the barbecue after being spiced with whatever we could find.”

On the Sunday morning, R Marine Jones led the group out of the narrow inlet and back into the main channel where they each went their separate ways homeward bound and with fond memories of another enjoyable R Marine Jones Experience.

For more information about the next R Marine Jones experience, contact the team on +61 7 5502 9544 or info@rmarinejones.com.au