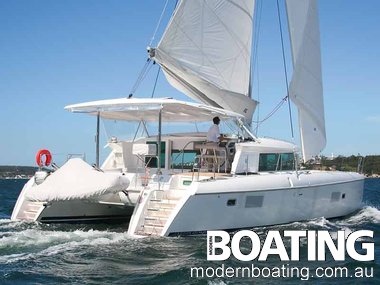 Whether you are ready or not, whether you like it or not, green is coming. Despite the criminal silence of Governments, the hysterical statements of the greens and the outright hostility of the loony right, a revolution of sorts is on the way because a large percentage of our society doesn’t want to take a punt on the future.

However things work out, the market for alternative power systems is growing, albeit slowly. Already the Dutch have built the prototype of a solar-powered runabout with the PV cells moulded into the fibreglass deck. And the French catamaran builder, Lagoon, is I believe the first production builder to offer the option of electric-auxiliary power with its Lagoon 420 Hybrid cruising cat.

You can have a conventional Lagoon 420 with a pair of Yanmar diesel auxiliaries or you can choose the Hybrid with two electric inboards, each powered by a bank of six batteries, which are themselves backed up by a 17.5kVa generator. The system provides enough juice for the cat to run for an hour under electric power at 4.5 knots without the generator cutting in, which it is designed to do when battery charge drops to 80 per cent of its peak (i.e. when 20 per cent has been used).

But the Lagoon’s big trick comes when she’s sailing. When speed under sail hits about 5 knots, and the freewheeling props and shafts reach about 150rpm, the boat’s system brakes the shafts, which then start generating at 3 amps per side. Then the brakes gradually release and the motors can generate at up to 18 amps, subject to boat speed. At 18 knots the system cuts out to avoid overcharging.

Lagoon make no claims that their system is a radical one. It is based on lead/acid batteries (gel batteries are an option), but they have resisted the temptation to use more advanced systems because their boats are sold worldwide, many for use as charterboats in remote places, and they need to be serviced easily. They chose 72V motors because 80V is the safety limit for humans and the company wanted a 10 per cent margin. The motors are 10kW units, the equivalent of about 14hp.

One obvious question: Why not back up with solar panels ? Lagoon’s response is that the recharging system is much more effective. Does it work ? Nicholas Bedgood from Lagoon importers Vicsail reckons the system cuts fuel use by 50 per cent. In the British mag Yachting World, a Lagoon 420 owner reported covering 500 miles on 300lt of fuel.
For the time being at least, alternative systems are expensive. The Hybrid 420 costs around $20,000 more than the conventional model with the two 40hp diesel saildrives. The Hybrid is more than a tonne heavier than the diesel boat. Both have the same fuel capacity.

The Lagoon 420 is a very roomy boat, available in a four-cabin version (with four bathrooms) intended for charter use, or the three-cab arrangement where the master cabin occupies the entire port hull.

The bridgedeck (the structure connecting the hulls) is carried well forward, doing away with the traditional crossbeam at the bow. This is the usual anchor point for the forestay, which is instead carried on a pod projecting forward from the bridgedeck.

The rig is a conventional cat. There is no backstay (so the mainsail can carry that pronounced trailing edge) but the mast is well supported. The sheets controlling the headsail are led to the helmsman’s position, so if he wants to the skipper can do all the work.

The first problem for me is the lack of noise. A lifetime of conditioning means that I expect to hear the growl of diesel engines, smell the pong of exhaust fumes. Instead there’s only the swirl of water from the transoms. I actually panic a bit; we’re in a crowded marina surrounded by gleaming white fibreglass and all my senses combine to tell me the engines have cut out and if we don’t fend off we will be impaled on anchors and pulpits and bowsprits and hear the terrible crunch of outraged fibreglass and the terrible roar of outraged owners and insurance companies.

But no, we are moving well, and proceed out onto the harbour at 4 1/2 knots. As a demo, Nicholas pushes the turbo button beneath the throttle levers and the Lagoon kicks up towards 7 knots, which it can hold for a short time to clear an emergency.

This is a heavy cruising boat without a lot of sail area, but on our sail, with 18-20 knots of wind, she rolls along nicely. Her fixed keels are well designed, because the 420 points very high  “sails very close to the wind” almost to monohull standards. On most multis this achieves nothing as they get upwind faster if you don’t squeeze them when sailing upwind, but on busy waterways it is always useful to be able to clear an obstacle by pointing above it rather than having to tack.

In this weight of breeze at least the 420 always tacks, even when we override the headsail sheets through negligence. This boat has an autopilot; Nicholas switches the control to tack mode, presses the button and around we go, as he handles the sheets. There is room behind the helm for two people to sit and to work the sheets if needed.

Pleasant environment
The 420 offers a pleasant environment. The cabins are all big and comfortable, with good storage. Each cabin has a panoramic window, an opening hatch and an opening port for ventilation. The aft cabins have an escape hatch in case the boat inverts, though given this boat’s weigh and stability it’s hard to imagine.

The hatches are fixed windows (conventional opening hatches are no longer used for obvious reasons) and hammers are clipped near each one so the glass can be smashed. There’s another hammer on the bridgedeck in case you need to break in. Sitting by these hatches, watching the interplay of water and wave, foam and light, is a joy.

The owner’s cabin is immense, extending the full length of the point hull. The Lagoon is comfortable and seems to have everything you would need. It is nicely appointed, flooded with light, the sort of accommodation women and kids love. The timber trim on later boats is lighter in colour than the honey-toned wood on this one. The big advantage with cats, one rarely mentioned, is if you want privacy you can find it. When you’re sick of your shipmates you can find a nook or cranny, on deck or below, where you can hide away and recharge your personal batteries.

Two choices
There are two choices to be made with the Lagoon 420. The first is whether you like the boat; the second is whether you wish to spend the extra for the advantages offered by the Hybrid version. The European owner we mentioned earlier said that with his previous cat he got tired of changing the oil in three engines, the two auxiliaries and the generator.

Our sail lasted a couple of hours, so we motored out and back with a stiff headwind on the way out, fiddled around, used the engines during photography, then put the boat back on the marina. We replicated a day’s outing, and the generator did not cut in. This boat lived on a marina, so after our sail she plugged back into shore power.
You will never save enough money to justify the extra expenditure on the Hybrid system. The advantages are different and highly personal.

But despite the naysayers, the evidence insists that green is coming. When Vicsail bought this boat, they also paid for the credits to offset the carbon used in its production, transport and usage for ten years. The European carbon-trading scheme had a false start, predictably, too many freebies were handed out, too many ‘special cases’ were given exemption. And Aussies, being the people we are, will do exactly the same, only years later. We seem to have trouble learning from our own mistakes and seem to be proud of ‘doing it the Aussie way’, which means ignoring the mistakes of others, getting it wrong and starting again.