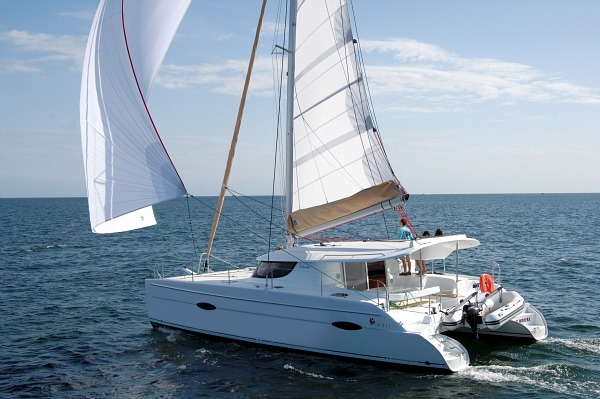 The Fountaine Pajot Lipari 41 has earned its reputation as one of the world’s top offshore cruising catamarans in its 12 metre class, after successfully completing a formidable 12,000nm voyage from France to Australia in just six months.

Confidently tackling the world’s biggest oceans and most challenging conditions, the Lipari 41, Mojo 2, recorded a number of 200+ nautical mile / 24 hour days and completed the passage well under the planned timeframe.

“Fountaine Pajot is the world’s leader in cruising catamarans, but we can now confidently claim the Lipari 41 sets new standards in offshore performance and long-haul cruising,” Richard said.

Multihull Solutions arranged for the new Lipari 41 to be sailed from France to Australia so the company could effectively see how the catamaran performed, as well as obtain invaluable owner’s feedback on the boat’s design over such a challenging distance.

In April 2011, this new 2011 Lipari 41, Mojo 2 was sailed by Andrew Partington and his crew from the Fountaine Pajot factory in La Rochelle.   After equipping the catamaran with comprehensive options and provisions, they set off on an unforgettable passage that included stops in Spain, Portugal, the Canary Islands, Antigua, Aruba, Panama, the Galapagos Islands, Tahiti, Cook Islands, Tonga and New Caledonia before arriving in Mooloolaba in October 2011.

Skipper Andrew Partington was particularly impressed with the Lipari 41’s speed throughout the voyage. “Over the full passage of 3700 miles into Tahiti, we average 149 miles per day,” he said.

“We had horrific weather over the last 24 hours approach Brisbane with 35 knots right on our beam. We had the mainsail at the third reef and a tiny headsail and the boat was still recording over eight knots.

“We used the gennaker for large parts of the Atlantic and Pacific crossings and was still able to carry this sail with 60 degree winds off the bow,” he said.

“Having all the lines returning to the cockpit also made this a very easy boat to sail and meant we were not tripping over lines on the deck. Also, the folding props were a real winner. When they fold back you can feel the surge in the boat, especially in stronger winds. Anyone would be crazy not to take this option.

“The beds were enormous and comfortable and you can not fall out in poor conditions on passages, and the galley layout worked really well.  The size of the fuel and water tanks were more than adequate, and the electronics package was very good, especially the Garmin chartplotters which worked a treat.

“The volume of the boat was just amazing and leaves for dead anything else I have seen in Australia.  At over six feet, I had full standing room nearly everywhere in the boat,” he said.

The Lipari 41 has become one of Fountaine Pajot’s biggest success stories, and Australian importer Multihull Solutions has already sold twelve in 2011 alone.

The catamaran has been constructed with a low centre of gravity and light displacement of 7.6T to ensure safety, stability with optimal comfort and performance in all conditions. The Lipari 41 features class leading bridge deck clearance and the latest design in hull shape, such as a wave splitter and aggressive flaring of the hulls. Its two 20Hp standard engines provide a cruising speed of 7.7 knots, while the option of two larger 30Hp engines offers up to 9.5 knots if required. “

Aesthetically, the Lipari 41 represents the pinnacle of European excellence with elegant lines and a revolutionary design that maximises space, storage and comfort.

Built using compression moulded fibreglass, the next generation of fibreglass technology, the Lipari benefits from big weight savings and strength gains over its competition. It outshines its competitors in innovation with the mast built into the deck rather than the roof for reinforced structural rigidity and ease of handling.

The Lipari 41 also features an integrated dual-seating helm station with excellent visibility and has the cockpit and saloon on the same level to help make short and long passages a cruising pleasure.

The cockpit features all-weather protection, ample seating for eight guests, a stainless steel framed dining table and open-plan entertaining facilitated by a large sliding door opening into the saloon. Inside, the saloon and galley have been designed for spacious and relaxed living with large windows that provide outstanding natural light, ventilation and visibility, beautiful timber cabinetry and the highest standard of fixtures, trims and upholstery.

Dining for eight is comfortably accommodated with the saloon’s stylish table that also has stainless steel legs, an integrated plate stand and extraordinary under-bench storage. The adjacent chart table is also large, comfortable and practical.

The generously equipped galley has been cleverly designed to ensure entertaining onboard is a breeze with an easy access ‘piano-hinged refrigerator’, outstanding storage and quality designer fixtures.
Each of the roomy cabins is well ventilated with large portholes, superb visibility and an abundance of hanging and cupboard space.

Mojo 2 is now for sale fully equipped for world cruising for just AUD$599,000 with more than $100,000 worth of added options.  The catamaran is located at Mooloolaba Marina at Multihull Solutions’ ‘Year Round Boat Show’ in Queensland. Prices for the new Fountaine Pajot Lipari 41 start from AUD$525,000.

Further information, sea trials and inspections of the Lipari 41 can be arranged by contacting Multihull Solutions