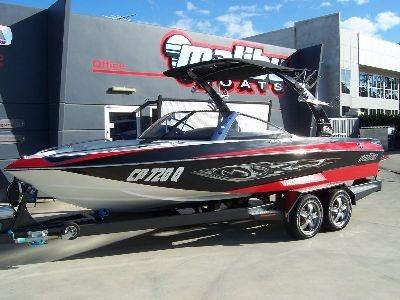 If all the new Aussie-built ski boats were placed side by side, what do you think would make a Malibu stand out ? The answer might surprise you. For besides striking lines, quality finish and the brilliant performance of these boats, the answer is resale value.

It is a well known fact – the team at Malibu in Albury have numerous documented cases – that if you owned a Malibu for say five years and looked after it, you can be almost assured that at resale you will get back what you paid for it – probably more.

But what about the problem of finding a buyer ? What problem ? Malibu owners don’t have any trouble finding a buyer for their boat when it’s time to upgrade. Once the word’s out a Malibu’s on the market, the buyers flock in of their own accord.

And, if you talk to any Malibu owners they will tell you that once you’ve owned a Malibu you wouldn’t consider buying any another brand of boat, you simply upgrade to the latest Malibu. That’s also why Malibus are such popular boats. Their models are revamped almost yearly. There’s always something different between one year’s model and the next, unlike some other brands where a model built five years ago can look exactly like one built today.

So what’s the Malibu story ? In 1982, Malibu CEO and founder Bob Alkema founded Malibu Boats and turned out his first multi-coloured ski boat. It featured eye-catching graphics that were coordinated with the upholstery. By today’s standards the multi-coloured hull would probably be called gaudy, but it served the purpose it was designed for – to catch people’s eyes.

The team at Malibu Boats were always open to ideas and they flourished at such a rate that within two years the company had repaid its initial start-up loan and was building 400 boats a year.

So why were these boats so popular with skiers ? Their designs were innovative, the build quality was second to none and in a nutshell they were excellent all round ski boats.

Then, in 1996 with the introduction of the custom-built Indmar engines, which Malibu engineers helped design and develop, the first GM Vortec engine with true electronic fuel injection was released.

Malibu Boats began production in Australia in 1993. The Aussie product is still heavily linked to America and even uses the same materials and components they are using in the States to fit-out their boats.

But this next generation of Response LXi family ski boats takes this well received model to a new level. It features wider walkways around the engine box and unrestricted access to the walk-through bow.

There’s also a new post-less moulded windscreen that not only looks good, but it gives the driver excellent all round vision. It’s trimmed with a stainless steel top rail that not only supports the screen, but also adds to the boat’s speedy looks. The screen is designed to direct the airflow when underway up and over the main cockpit, so it doesn’t buffet the occupants.

There is a heavily padded lounge across the transom, full cockpit carpets and stereo speakers in the rear cockpit. The driver’s seat is fully adjustable and supports the driver’s body well.

The dashboard has a Carbon Fibre finish and features 5′ Borg-Warner gauges that are not obscured by the sports steering wheel. The speedo is connected to a paddle wheel for increased accuracy and the gauges even display not-so-critical information such as water and air temp.
Then, if the air temp gets too low, on a crisp early season morning, you could always turn on the option driver’s seat heater.

The wide, aft-facing observer’s lounge is extremely comfortable. There is an icebox/glove box in front of this seat and a grab handle for passenger security. Up front, the bowrider cockpit isn’t huge, but it’s an ideal spot for two people to stretch out and enjoy the ride.

On the construction side of the house, Malibu utilises a Fibreglass Engine Chassis System, which incorporates through-bolted engine mounts, wood-free construction, nil vibration and flawless Gelcoat. Even the wire looms are properly wrapped and routed through the system. Active air induction increases airflow to the engine for greater overall acceleration, while hydroponic dampening provides additional stiffness surrounding the prop shaft. It utilises the natural dampening qualities of water to reduce prop thrust for vibration-free running.

Out on the water, Malibu’s award winning SV23 Diamond Hull produced soft, flat wakes and pinpoint turning. It was like driving a Go Kart on rails. The hull features wide down-turned chines and strakes moulded at 90 degrees. These create mini tunnels between the chines and strakes on each side of the hull. Add to this the sharp keel and three tracking vanes and it’s easy to understand why this hull tracks and turns so precisely with absolutely no propeller cavitation.

Power for this exhilarating performer comes from a Malibu Vortec 310hp carburetted V8. And forget all the hype you’ve read about requiring electronic fuel injection if you’re after powerful, smooth operation. The standard Malibu Vortec delivered all the silky smooth ‘push you back in the seat’ performance you could ever require. Sure, EFI’s an option, but it’s really not required.

The Response LXi is a true tournament ski boat. And yes, it does handle like a Go Kart on rails. Yes, the steering, throttle and acceleration are silky smooth and yes; the finish is second to none. But it’s not only the boat people are raving about; the trailer is also something special. It’s a custom upgrade especially built for Malibu. This tandem trailer features custom Malibu mags, hydraulic disc brakes, a swing away draw bar, stainless steel steps, heavy duty Fulton winch and is constructed from rounded architectural steel.

For those using operating in saltwater locations the trailers can paint over gal, or for purely freshwater operation they need only be painted.

The list of extras available is extensive, but as far as the Modern Boating team was concerned, even in its standard configuration the Response LXi was well appointed and had everything need for plenty fun filled days of full-on skiing.

Finish, standard of fittings and fixtures, performance and handling, value for money, back up service and customer support, the Malibu Response LXi gets a tick in every box. In fact, even after a few hours out on the water I can honestly say the team couldn’t fault this boat.

Yes, this is a professional three-event ski boat, but she’s also a family boat that will happily tow the kids around on a rubber tyre all day. To park one of these excellent Aussie-built boats in your driveway will set you back around $46,000. For further information and dealer locations telephone Malibu Boats on (02) 6040 1174.