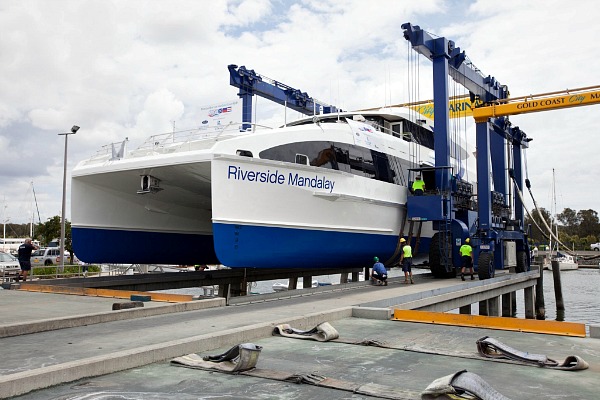 Marine industry leaders can’t speak highly enough of the 2nd annual Gold Coast International Marine Expo which concluded yesterday, with many exhibitors recording the most sales in years, while others have filled their order books for the next six months.

The not-for-profit Expo has been described as ‘breathing life back into the marine industry’, which was certainly impacted by the GFC. It has now become one of the major boating attractions on the Australian boat show calendar and is expected to double in size over the next five years.

Attendance at this year’s Expo defied industry trends with a total of 20,752 people through the gates from around Australia and New Zealand over the three day event, which is a 24 per cent increase. Attendance is independently counted and verified by Rotary Club members. Exhibitor numbers were also up with more than 40 new exhibitors at this year’s event; and once again the live entertainment every 15 minutes across the three days including the RAAF Roulettes, Flyboard, the Jetlev Jet Pack and the, factory tours, workshops, presentations and seminars thrilled the massive crowds.

This year there were more than 500 boats on display on both the land and in the water, which is a significant increase on last year’s Expo. Access to the event via free entry and free on site parking also help make the Expo a major attraction for boating enthusiasts from across the nation.

Tweed Coast Marine showcased a selection of aluminium trailer boats ranging in size from 4 metres to 6.25 metres. Owner Dan Andrew said it was the best show he had attended in a long time.

“We recorded the most sales that we have had in the past three years. We sold over a dozen new boats at the Expo and have more to follow up this week,” Dan said.

AMI Marine Queensland State manager, David Tanner, said that after more than 25 years in the industry, the Expo was by far the best boating exposition he had ever seen.

“People were enjoying a family fun-filled day out. The experience of watching the giant travel lift operate and the Quintrex and Riviera factory tours where people could see the boat building process is something that has never before been experienced at any other boat show,” David said.

“We are sitting here, the day after the Expo, with the orders rolling in – it doesn’t get much better than this. We had a great result, it far exceeded our expectations and it has created some real momentum for the New Year.

“The great thing about this event was the diversity of the demographics and the appeal to the aspiring boat owner. On the Friday we saw people who had flown in from as far away as Tasmania and Darwin, they were boat owners who came to spend money on marine products. On Saturday, it was the local enthusiasts who were renovating a boat or working on a project and were looking for specific products. And on the Sunday, it was the family day and it was great to see so many children at a boat show. Overall, it was an excellent three days and we look forward to next year.”

Dylan Lopez from Sirocco Marine North was one of the Expo’s founding exhibitors who doubled his space this year and said he was going to double his space again at next year’s Expo.

“At the Expo we can really take people on a journey and give them an experience. This year we had a number of sea trials and have more than 35 strong leads heading into the start of the season. For us the Expo timing is perfect,” he said.

“To have a low cost event means there is less pressure to try and recoup higher costs so the consumer benefits all round, and the easy logistics and the fact that the Expo is organised by the industry for the industry makes it such a fantastic event for everyone.”

Andrew Bennett from Queensland Marine Centre said they recorded more than $1.5 million in sales across a range of Sea Ray, Boston Whaler and Master Craft products.

“We were extremely impressed with the results that we had from the Expo, which is really going from strength to strength,” Andrew said.

Dino Tantaro from Zodiac Marine said the Expo had created a new market and many long term opportunities.

“It is the long term gain that comes from the Expo that is most important, and I knew last year that it was going to grow and I have been proven right,” Dino said.

“We did sell quite a few boats on the stand during the Expo but our dealer now has a week or two to follow up on the strong level of enquires from the Expo.

“There was so much entertainment and being a charity fund raising show was another very positive aspect. One of the happiest moments for me was when people told me they would never have considered boating before coming to the Expo.”

Gold Coast International Marine Expo president, Stephen Milne, said the results were extremely gratifying and would total tens of millions of dollars when the full impact of the expo’s reach is realised. This result reflected the strong community spirit and the camaraderie among the marine industry.

“We are extremely proud of the success of this year’s Expo and a number of exhibitors have already today committed to their involvement in next years Expo,” he said.

“The live entertainment was of an extremely high calibre and we were extremely fortunate to secure three daily shows from the RAAF Roulettes.

“I would like to thank all of the hard work the Expo team and committee, all of whom gave their time mostly free of charge to make this year’s Expo the success that it was. I would also like to recognise the great passion of Dean Leigh-Smith, our Expo vice-president. It is a sheer pleasure working directly alongside Dean and I value his support and commitment. The Expo is a real team effort and both Dean and I are honoured to be a part of this special team of people.

“We have announced the dates for the 2013 Gold Coast International Marine Expo, which will be held on November 1, 2 and 3.”